As Northwest College dives into the heat of the 2021 men’s soccer season, the focus will be learning how to better contain leads. 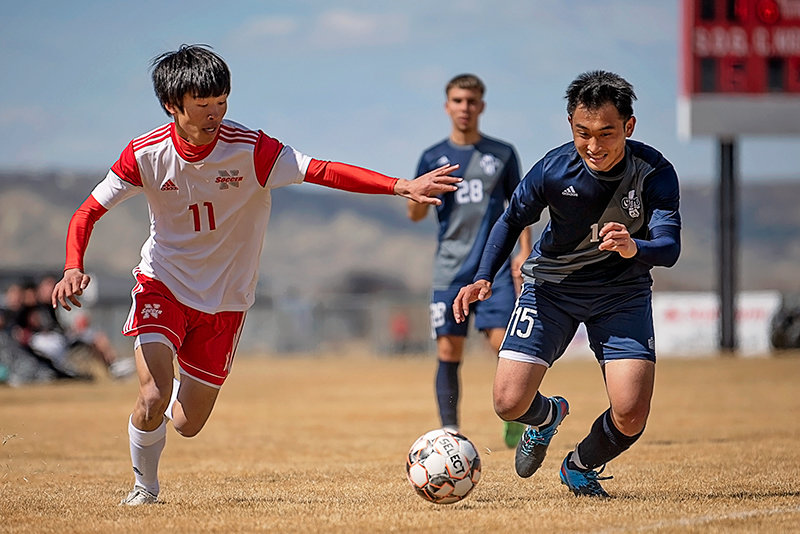 Taisei Goto (left) plays defense Saturday against Otero. NWC head coach Rob Hill hopes the team uses its most recent losses as a learning experience as it dives into the heat of the season.
Tribune photo by Carla Wensky 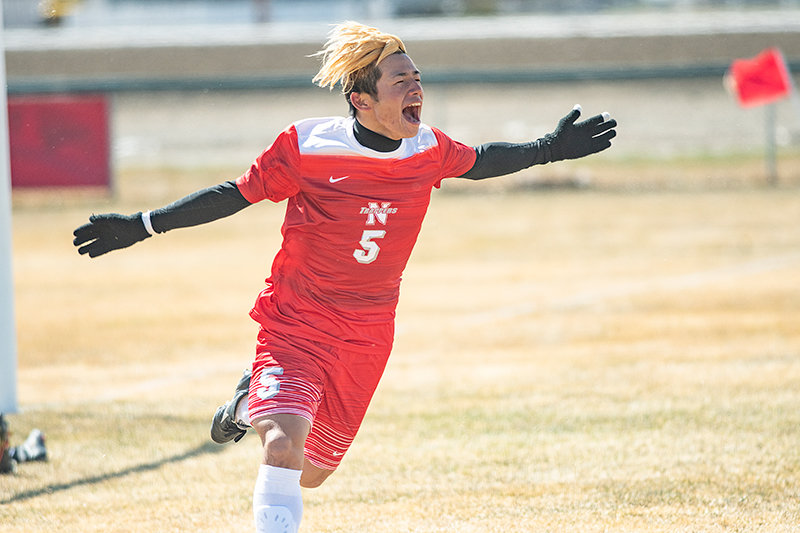 Keito Komei celebrates after giving NWC a 1-0 lead with a goal Monday. Despite dominating the first half, the Trappers were unable to hold their lead, eventually falling 2-1 in extra time.
Tribune photo by Carson Field
Previous Next
Posted Thursday, April 22, 2021 8:05 am
By Carson Field

As Northwest College dives into the heat of the 2021 men’s soccer season, the focus will be learning how to better contain leads.

The Trappers dropped matches against Otero Junior College and Trinidad State Junior College on Saturday and Monday, falling 4-1 and 2-1, respectively. The Trappers led 1-0 in both matches but were unable to sustain the advantages. Following the losses, NWC is now 1-2.

In the loss to Otero, NWC led the first half after Dorian Heredia Terra scored in the 12th minute. The Trappers dominated possession and notched several shots on goal — which they should’ve taken advantage of, said coach Rob Hill.

“We had good build up, but couldn’t capitalize,” he said.

Despite the Trappers’ dominance in the early goings, OJC knotted the game late in the half when Kevin Cuellar snuck one past Bailey Jordan in the 40th minute. After halftime, Otero built on Cuellar’s equalizer; the Rattlers scored three more in the second half to clinch the victory.

“We came out a little flat” in the second half, Hill said. “They caught some breaks and we missed tackles. If we came out with the same focus as the first half, I think it would’ve been a different story.”

Against Trinidad State, Northwest got on the board early when Keito Komei scored in the seventh minute off a cross from Thomas Mullen. Though the Trappers once again dominated the first half — playing into a significant wind advantage — Komei’s goal was the only one of the half.

“We should probably have been up by a couple goals, but we were pretty confident going into the second half,” Hill said.

While Northwest and Trinidad State were in the locker room, bad weather turned into worse weather. Snow began falling on Trapper Field, making the game even messier upon returning from the intermission.

With wind gusting against NWC on every possession, the Trappers’ time of possession dwindled, giving the Trojans more offensive chances. And in the 67th minute, Oscar Gonzales tied it at 1-1. Neither team found the back of the net in the subsequent 23 minutes, sending it to extra time.

Once again, TSJC played with the advantage of the wind in overtime. Just three minutes in, Alejandro Castaing knocked in the golden goal for Trinidad State, clinching the 2-1 win.

Now 1-2 overall, the Trappers faced Central Wyoming for their last home match on Wednesday. While it’s the final home contest for NWC, the team still has six regular-season games on the schedule, giving it plenty of time to shoot above .500 again.

With so much soccer left to be played this year, Hill thinks these disappointing performances may actually benefit his squad.

“It’s not detrimental to our season,” Hill said. “Obviously we all want to win, but sometimes these can help you down the road. We’ll improve from these.

“We’re still in the hunt even with weight on their shoulders,” he said ahead of Wednesday’s contest. “I feel like it could be a good turning point for getting the season back on track.”