Making its way to Miami, Oklahoma, the No. 7-ranked Northwest College wrestling team came up against top competition at the NJCAA National Duals on Friday and Saturday — finishing 4-2 at the … 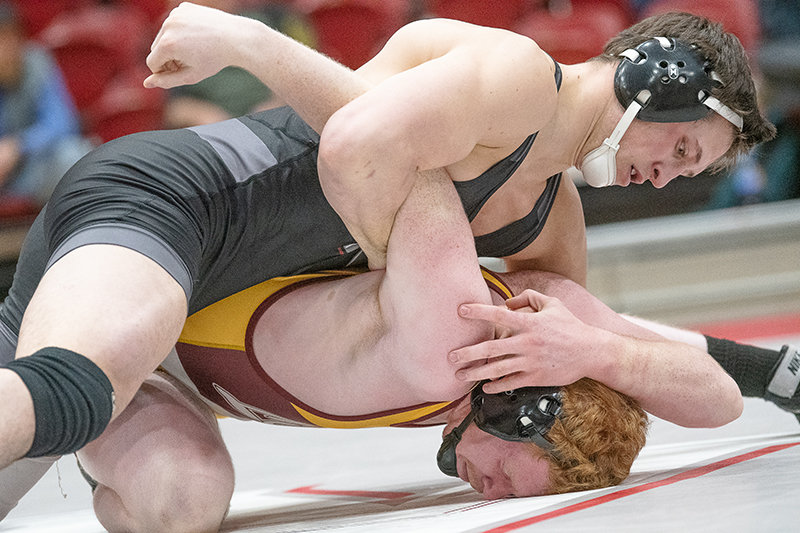 Ryker Blackburn pins down his opponent during a dual with MSU-Northern on Jan. 10.
Tribune photo by Carla Wensky
Posted Thursday, January 19, 2023 8:20 am
By Seth Romsa

Making its way to Miami, Oklahoma, the No. 7-ranked Northwest College wrestling team came up against top competition at the NJCAA National Duals on Friday and Saturday — finishing 4-2 at the premier event.

“I’m real proud of the kids,” coach Jim Zeigler said. “I didn’t feel like we wrestled well against MSU-Northern but then we wrestled tough at the national duals.”

Starting out the weekend with pool play, the Trappers kicked off action against Colby Community College in their opening round-robin dual.

Colby took the early lead 11-0 after a Trapper forfeit at 125 pounds and a 17-2 technical fall at 133 pounds over Avery McSpadden.

No. 1-ranked Bobur Berdiyorov got Northwest started at 141 pounds, earning a pin in under a minute to make the score 11-6.

Colby extended the lead at 149 pounds after a second forfeit, but Gus Harrison regained the points back for the Trappers at 157 pounds after pinning his opponent in the first round.

Colby got its final points of the dual at 165 pounds, as a tight 6-4 decision resulted in a loss for Orrin Jackson to make the score 20-12.

Consecutive forfeits by Colby at 174 pounds and 184 pounds gave the Trappers their first lead of the night 24-20 and the opportunity to seal the win at 197 pounds.

No. 3-ranked Ryker Blackburn earned a pin in the first round, followed by a pin from No. 10-ranked Cody Pinkerton at 285 pounds to make the final score 36-20.

A second matchup of the day had the Trappers matching up with Bryant & Stratton College from Wisconsin.

The match started with a double forfeit at 125 pounds, and Avery McSpadden earned the pin in under a minute at 133 pounds to give Northwest a 6-0 lead.

A double forfeit at 141 pounds set up another matchup at 149 pounds, where Berdiyorov earned a 10-5 decision to make the score 9-0.

Harrison earned a pin at 157 pounds over No. 5-ranked Jalin Conner, before back-to-back forfeits by Bryant & Stratton quickly made it 27-0 for Northwest.

Bryant & Stratton earned its only points of the dual at 184 pounds after a pin in the first round, before Blackburn earned a pin at 197 and another forfeit at 285 made the final score 39-6.

Continuing the action in the third round of round robin play, Northwest tried to continue its strong performances against Iowa Lakes Community College.

Berdiyorov got the Trappers back in the contest at 141 pounds, with a dominating 22-3 technical fall to cut the lead to 10-5.

A tight 6-5 decision over Orrin Jackson at 165 pounds made it 19-11 and a double forfeit at 174 pounds set up a crucial final three bouts.

In his first action of the day, No. 1-ranked Aziz Fayzullaev earned a pin to get things started at 184 pounds.

Zeigler said he knew they were forfeiting at 174 pounds, so he opted to force a double-forfeit at that weight and wrestle Fayzullaev up at 184 pounds in an attempt to maximize the points earned by the Trappers at both weights.

Finishing pool play, the Trappers matched up with No. 14-ranked Southwest Oregon Community College with the winner earning the top spot in pool B.

Harrison won with a 3-1 decision, and Northwest narrowed the gap more when Jackson earned an 11-4 decision at 165 and Fayzullaev earned a major decision at 174 to make it 18-13 heading into the final three weights.

After going undefeated in pool play, Northwest advanced to the quarterfinals into a top-10 matchup with No. 6-ranked Triton College of River Grove, Illinois.

Triton took advantage of the early forfeit at 125, and added to the lead at 133 pounds after a pin over McSpadden to make it 12-0.

A 15-4 major decision for Berdiyorov cut into the lead before another forfeit at 149 made it 18-4.

Harrison earned a 10-6 decision at 157 pounds over No. 5-ranked Connor Svantner but Triton answered with a 6-5 decision at 165 to maintain its lead.

Fayzullaev got a pin at 174 over No. 5-ranked Sherman Dixon to cut into the lead and make it 21-13 with the match in the balance during the final three weights.

Triton secured the victory at 184 pounds, after a pin of Cody Todd made the score 27-13.

“Cody [Pinkerton] ended up being the dominant heavyweight for the weekend,” Zeigler said.

After the quarterfinal loss the Trappers dropped down to the consolation semifinal, where another difficult top-10 matchup greeted Northwest against No. 5-ranked Northeast Oklahoma.

Forfeits by both teams and a pin by Northeast Oklahoma through the first four matches had the Trappers on the wrong end of an 18-6 deficit at the midway point of the dual.

A major decision at 157 pounds and a pin at 165 grew the lead even further out to 29-6 for Northeast Oklahoma.

Northwest will stay on the road one more week, heading to Rock Springs to take part in the Region IX duals at Western Wyoming on Saturday.

“Hopefully (national duals) will boost those guys up,” Zeigler said. “We are trying to get ready for the Apodacas.”

This will be the Trappers’ final road event before returning home to Powell to host the Apodaca Duals on Jan. 27-28.