Nathanael Rhodes, a local 9-year-old, has a lot going on. In his first year at the Park County Fair his poultry won first premium, next summer he will show a goat, and in the meantime he helps his … 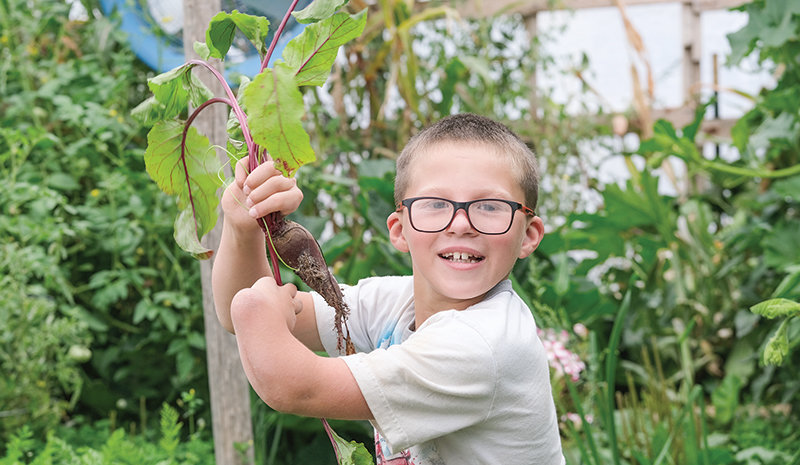 Nathanael Rhodes holds up a freshly picked beet in his family’s greenhouse; he picked one for dinner and two more for snacks, of course.
Tribune photo by Braden Schiller

Nathanael Rhodes, who has two prosthetic legs, has figured out ways to quickly get around his property. To get into the goat pens, he lifts himself up one side, braces his arm on the other and lets gravity put his feet on the ground.
Tribune photo by Braden Schiller 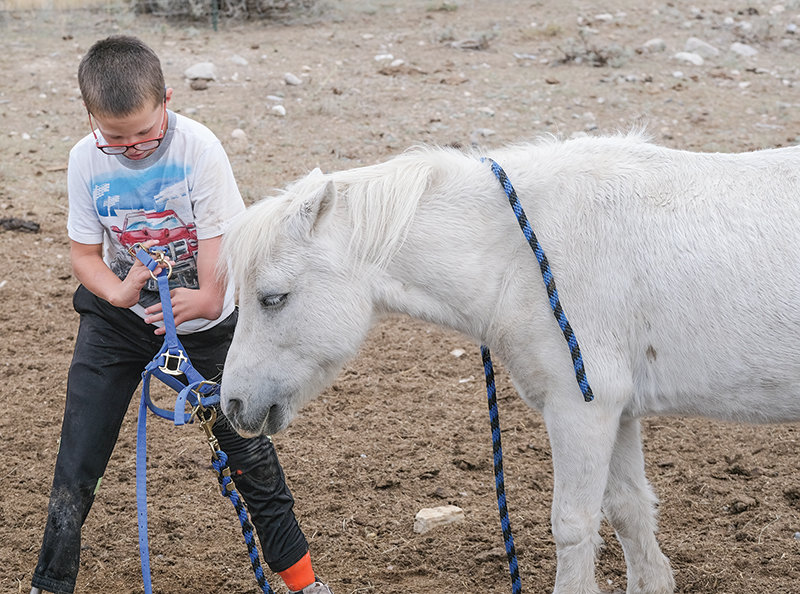 Nathanael Rhodes gets ready to ride Samson, who has been in the family since his mother Kateland was a child.
Tribune photo by Braden Schiller 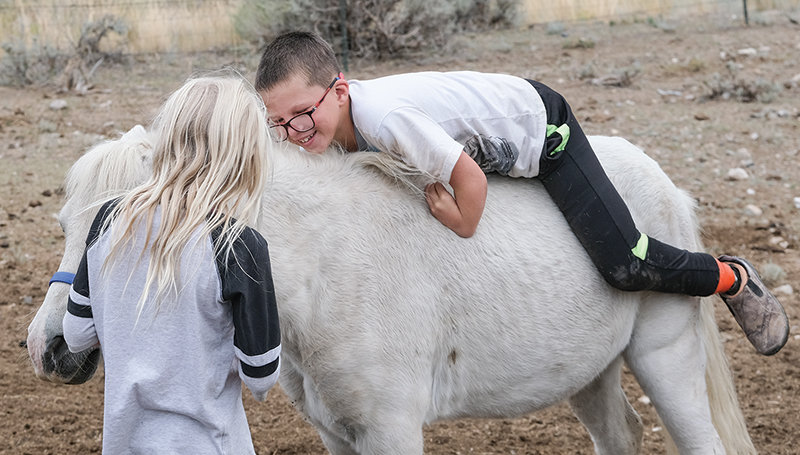 Nathanael Rhodes, a local 9-year-old, has a lot going on. In his first year at the Park County Fair his poultry won first premium, next summer he will show a goat, and in the meantime he helps his family take care of their many animals and tend the greenhouse.

“No one can do our chores for us,” Rhodes jokes.

At last year’s fair Rhodes took a chicken, a duck and a rabbit to competition. Previously he had only helped his cousin with their rabbit. Rhodes’ secret to a successful show animal is to keep them clean and fed and, of course, play with them. Determination plays a big role too. When it came to showing his rabbit, holding and flipping the animal for the judge was going to present a problem. The judge was going to allow another child to hold the rabbit for Rhodes.

“And he was determined that that was not going to happen. He didn’t want someone else to hold his rabbit for him,” his mother Kateland Rhodes said. “So he spent a lot of time out there trying to figure out how he was going to flip his rabbit with no thumbs and then he doesn’t have a wrist in one arm and he doesn’t have a radius.”

Nathanael was born missing bones. Originally he was diagnosed with a syndrome, but what he is missing on one side he had on the other — doctors don’t have a name for this. He hasn’t had any surgeries since he was 2 years old, while since then he has gotten two prosthetic legs (he tells his friends they are his robot legs.)

Nathanael argued that it only took a week to figure out how to flip the rabbit, “it’s not that long.”

Next year he will show a goat at the fair. Nathanael and his family are aware that there may be challenges when it comes to keeping balance and controlling the goat, but they are up for the challenge.

“I always say, we’ll see how it goes, but he always figures it out and it’s fun to watch him,” Kateland said.

Right now Nathanael is working with his physical therapist to use crutches, he says this way his mom doesn’t have to carry him when he isn’t wearing his legs.

“Our prosthetist has been wonderful. We use Jim Middleton of Rimrock Prosthetics in Billings. And he has always from the very get go highly encouraged us to figure things out ourselves,” Kateland said. “He said, ‘you’re gonna figure out what works for you guys. If you want to modify your legs, if you want to do something, figure out what works and let me know how I can help.’”

Nathanael and his family took this to heart. Along with helping with the cows, goats, kittens, chickens, ducks and geese, he rides horses, camps with his family, wrestles, shoots a .22 with the help of a bipod and is learning how to shoot a bow.

Nathanael moves through the animal pens faster than anyone can keep up. To get to the cows he lifts himself up one side of the fence, leans forward and lets gravity pull his legs toward the ground. A similar process gets him onto the family’s miniature horse Samson, which has been in the family since Kateland was a little girl. Samson isn’t the only horse Nathanael rides, normally he rides a larger horse named Mel. He’s been riding horses since he was 4 and particularly enjoys it when “I get to ride my own horse.” Right now he’s working on being able to take the saddle off without assistance.

Nathanael has fallen in love with life in the country and has even begun to draw up blueprints for his own farm. The farm will have ponds, a creek that runs next to the house, cows, horses, pigs, sheep, llama and chickens. He’ll grow beets, carrots, turnips, okra, corn, tomatoes, cabbage and potatoes. All of his cousins will live on the property and there will be a dock so they can jump into the water. It’s important to have fun.