Newsome delayed in return to Cheyenne after leg injury

Rep. Sandy Newsome, R-Cody, isn’t letting a leg injury keep her from Cheyenne for too long.

Newsome delayed in return to Cheyenne after leg injury 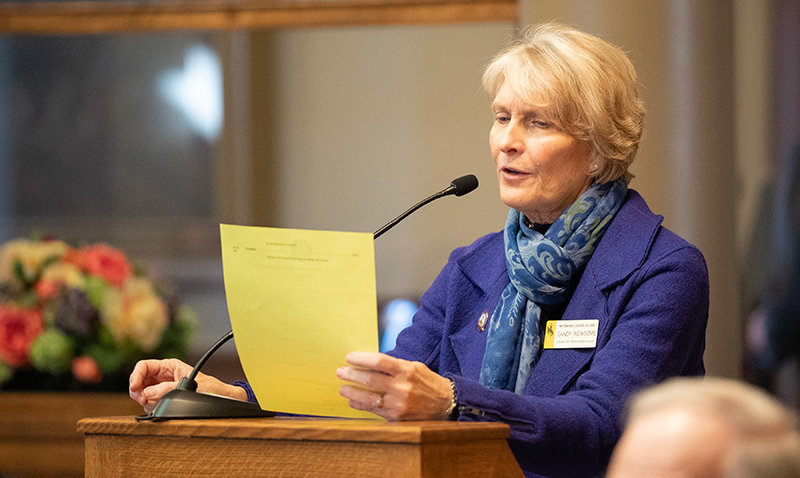 Representative Sandy Newsome, R-Cody, listens during discussion at the 67th Legislature in the House Chambers January 12, in Cheyenne.
Photo by Michael Smith for the Tribune
Posted Tuesday, January 24, 2023 8:10 am

Rep. Sandy Newsome, R-Cody, isn’t letting a leg injury keep her from Cheyenne for too long.

Newsome broke both bones in her lower leg when she said she stepped awkwardly as she dismounted her horse.

She quipped that it’s the same leg she broke in a skiing accident 10 years ago and thus already has metal in it, “I guess a little more won’t hurt.”

That kept her from being able to return to the Capitol last week and she was excused from the sessions.

But on Friday she said her doctor determined she needed surgery, which means she expects to be able to return to Cheyenne Jan. 30.

She’ll have a lot to return to.

She’s sponsoring three bills, all of which are now in committees. Those include: HB0118: Volunteer firefighter pension-funding; HB0137: Minors-sale and purchase of cannabidiol prohibited; and HB0138: Suicide prevention.

“I will be focusing on them this week,” she said.

For now, she’ll just have to do so remotely, as will Gov. Mark Gordon, as his office announced he had tested positive for Covid late last week.