Another Trapper volleyball player is taking her talents to the next level, with sophomore right side hitter Emily Baumstarck signing her letter of intent to play at the University of Mary in … 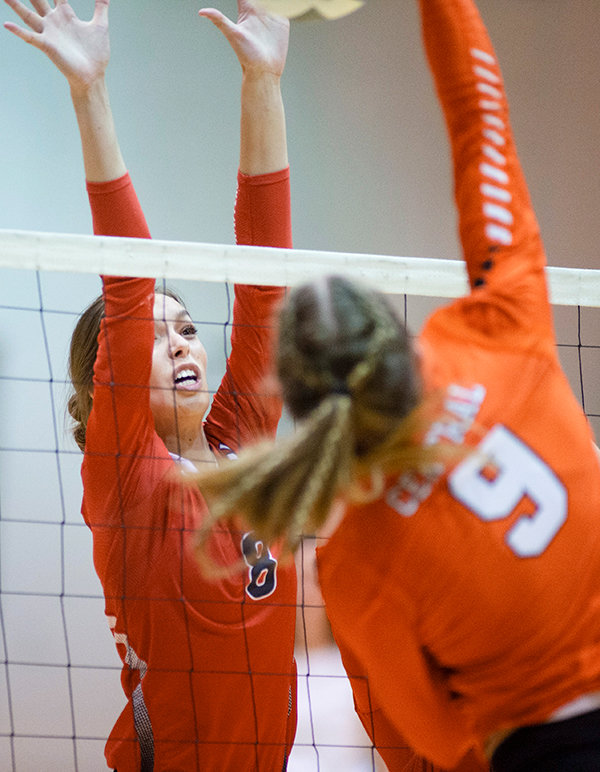 NWC sophomore Emily Baumstarck goes for a block during the Trappers match against Central Wyoming in October.
Tribune photo by Mark Davis 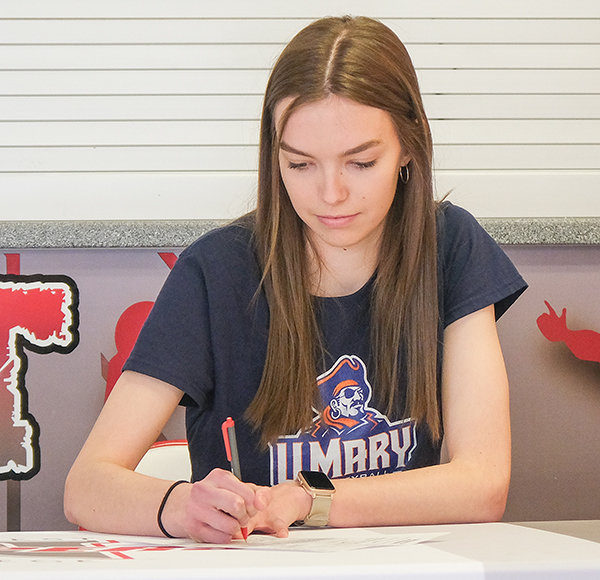 Trapper sophomore Emily Baumstarck signs her letter of intent on Wednesday to compete at the University of Mary. Baumstarck will head to Bismarck, North Dakota, with two years of eligibility remaining.
Tribune photo by Seth Romsa
Previous Next
Posted Tuesday, April 19, 2022 8:05 am
By Seth Romsa

Another Trapper volleyball player is taking her talents to the next level, with sophomore right side hitter Emily Baumstarck signing her letter of intent to play at the University of Mary in Bismarck, North Dakota.

Baumstarck originally ended up with the Trappers after an unusual series of events two years ago.

She played one season at Sheridan College before COVID-19 forced Sheridan to shut down its athletics programs, leaving Baumstarck searching for a new college home.

She found that home not far from her hometown of Worland, signing with Northwest in 2020 and playing two seasons for the Trappers.

“Emily [Baumstarck] was a light that this program needed to help get it back on the path of success,” Trapper head coach Scott Keister said during ceremonies Wednesday as Baumstarck signed her letter of intent.

She finished her Trapper career with 130 kills and 65 blocks while being part of a program that went 38-20 over those two seasons.

Baumstarck decided on the Marauders after visiting different colleges. She said she felt like the atmosphere was right for her in Bismarck.

“I hope to compete for a starting spot and to help them get a winning season,” Baumstarck said.

The Marauders finished the 2021 season with a 6-23 record while competing in NCAA Division II.

Baumstarck said she is taking lessons from her team, as they helped her come out of her shell over her two years in Powell.

“I will miss him [Keister], and I will miss my team, we had a real family bond,” Baumstarck said.

Baumstarck is set to graduate this spring with an associate’s degree in allied health, and is hoping to earn a bachelor’s degree in that field.