returners honored with Heart of a Champion award

In a first of what organizers hope to be many, redshirt freshman Kolter Merritt was named the inaugural recipient of the Jay Collins Memorial Scholarship during halftime of the men’s basketball …

returners honored with Heart of a Champion award 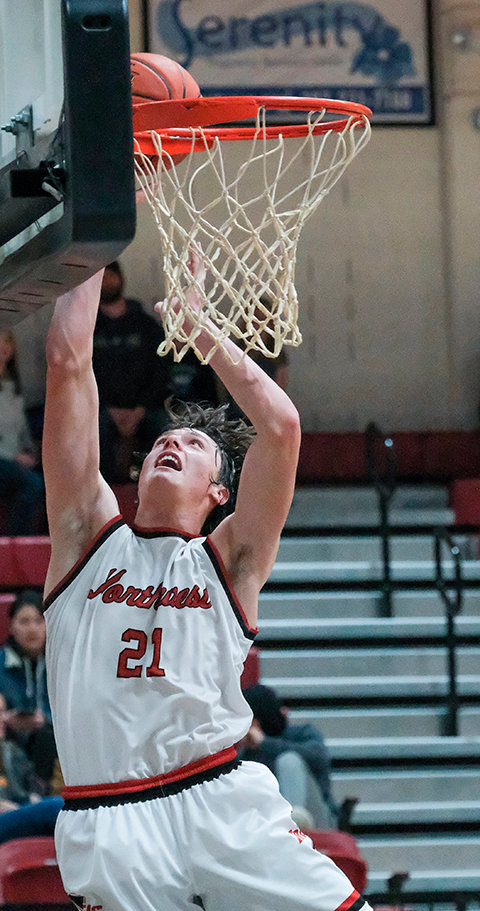 Kolter Merritt finishes at the rim during the Trappers’ victory over the All-Stars on Friday. Merritt was named the first recipient of the Jay Collins Memorial Scholarship during halftime of the game on Friday.
Tribune photo by Seth Romsa
Posted Friday, November 25, 2022 8:24 am
By Seth Romsa

In a first of what organizers hope to be many, redshirt freshman Kolter Merritt was named the inaugural recipient of the Jay Collins Memorial Scholarship during halftime of the men’s basketball game on Friday at Cabre Gym.

He said he came to Northwest from Star Valley unsure of how to be a college athlete, but Collins helped guide him in the right direction to work hard and help reach his potential.

Merritt began the season off the bench for Northwest and has gradually been working his way further into the rotation, with Friday night being a career high night in which he scored 18 points for the Trappers against the All Stars.

“I just played ball, I know that is what coach Collins would want me to do,” Merritt said. “I am glad I got to show that, what I am capable of, and what this team is capable of.”

Moving forward, he is hopeful that he set an example for future scholarship recipients that with a lot of hard work you can do anything.

HEART OF A CHAMPION

Alongside being the first recipient of the Jay Collins Memorial Scholarship, Merritt and returning athletes from last year’s men’s and women’s basketball teams received the inaugural Heart of a Champion award.

The award is given to those who have shown hard work and dedication to the team and the sport, and will be given out yearly moving forward.

“I know (Collins) would have chosen all of us, he really impacted all of us and our collegiate careers and we are glad to get to know him in the short time that we did,” Merritt said.

Those wishing to donate to the Jay Collins Memorial Scholarship can still donate at nwcollegefoundation.org/jay-collins.