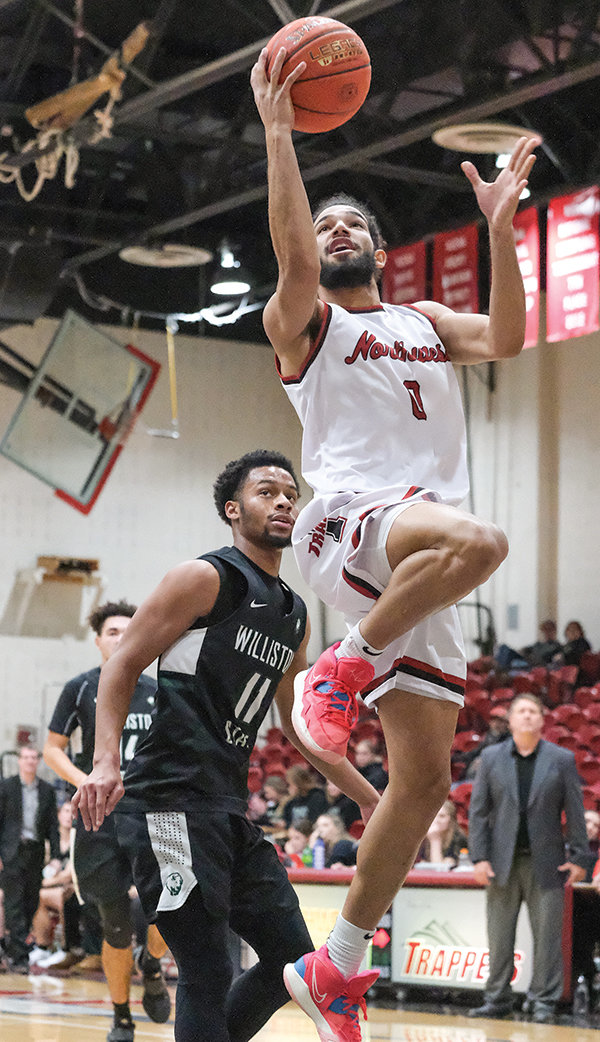 Milton Rodriguez Santana finishes off the fast break against Williston State on Monday. The Trappers have continued their hot start to a 5-1 record early in the season.
Tribune photo by Seth Romsa 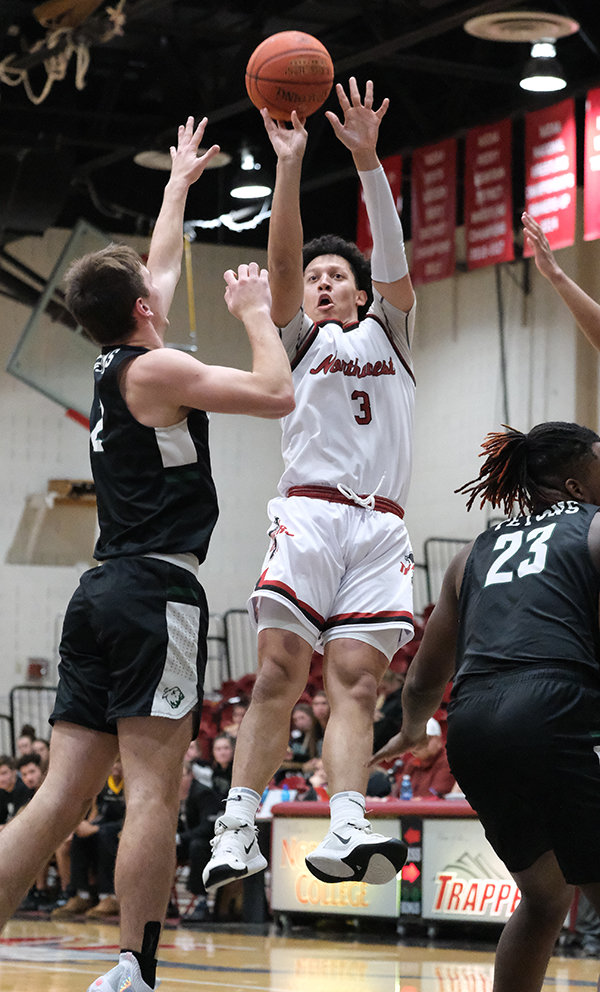 Davion McAdam fades away over a Williston State defender during the Trappers 92-53 route on Monday.
Tribune photo by Seth Romsa
Previous Next
Posted Thursday, November 17, 2022 8:10 am
By Seth Romsa

A high intensity effort from the Northwest men’s basketball team helped the Trappers continue their hot start to the season as they rebounded from their first loss Friday to Air Force Prep 81-70 to defeat Lamar Community College 74-60 on Saturday and Williston State 92-53 on Monday.

The weekend began at a tournament in Riverton on Friday, where the Trappers (5-1) matched up with the Air Force Prep team.

Northwest started out the game trailing 10-0 and struggled to overcome a matchup zone defense played by the Falcons.

The Trappers battled back throughout the game and cut the lead down to a single possession, but were unable to overcome the early run to take the lead en route to Northwest’s first loss of the season 81-70.

“They are a very good team so it was a great test for us,” coach Andy Ward said. “They are very talented. They have a lot of offensive weapons and are very disciplined as you might imagine.”

Ward said that his team could learn from the way the Air Force Prep offense is run due to the attention to detail the team pays to each play.

“They are probably one of the better opponents we are going to face,” Ward said.

Davion McAdam led the Trappers with 20 points, alongside Juan Pablo Camargo Tellez with 13 points and David Ayala with 10.

After the first loss of the season, the Northwest men looked to rebound on Saturday in Riverton coming up against Region IX South opponent Lamar (1-4).

Coming out of the locker room the Trappers had a renewed focus on defense and jumped ahead early.

Northwest pushed its lead out to as many as 20 in the second half but a run by Lamar kept the Runnin’ Lopes in the contest.

The Trappers held Lamar at arms length, holding on for a 74-60 victory.

“I was happy with the way they bounced back from their first loss of the season,” Ward said.

Yannice Nlend led the Trappers with 24 points, while McAdam finished with a 21 point, 11 rebound double-double.

Following the weekend away the Trappers returned home on Monday night to play their third game in four days against Williston State (0-6).

Disaster nearly struck early in the game when McAdam went down with an ankle injury and was helped off the court.

“He had to get some help coming off but he said to me right away that he would be OK,” Ward said. “A little bit of a sore ankle but as far as we can tell it’s nothing serious.”

Northwest was without its leading scorer for several minutes, but McAdam returned to play in the first half. He finished as the joint top scorer in the game with 20 points.

Despite holding a 24-point lead at the break, Northwest ramped up the pressure to start the second half and pushed the advantage out to 35 utilizing the starters and bench.

“I was so proud of them, I loved every second of it,” Ward said. “We had guys diving all over the floor, we had Kolter [Merritt] flip over the third row — it was contagious and it felt really good.”

That pressure continued throughout the half and helped push Northwest to its largest win of the season at 92-53.

Camargo Tellez finished with 17 points and David Ayala chipped in 11.

For the final time in November the Trappers will be hosting a pair of games this weekend as part of the inaugural Coach Collins Heart of a Champion Memorial Classic.

Friday night will consist of a matchup between Northwest and a team made up of Northwest alumni set to tip off at 7:30 p.m.

During halftime of that game the Trappers will present the Heart of a Champion award alongside the Jay Collins Memorial Scholarship with a slideshow presentation dedicated to the late coach Collins.

“It will be a special weekend and a very emotional weekend,” Ward said.

On Saturday, Northwest will take on North Idaho College (0-0) in what Ward expects to be a strong test for the Trappers early in the season.