The alleged use of a bear claw shaped meat shredder led to an arrest for aggravated assault and battery on Nov. 11.

According to an affidavit written by Powell police Sgt. Phillip Alquist, local … 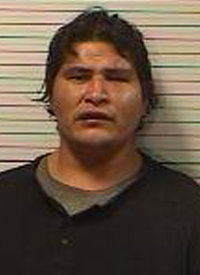 The alleged use of a bear claw shaped meat shredder led to an arrest for aggravated assault and battery on Nov. 11.

According to an affidavit written by Powell police Sgt. Phillip Alquist, local resident Elias Antelope hit his cousin Matthew Tail with a Char-Broil meat shredder, a plastic kitchen tool shaped like a bear claw used to shred meat. Antelope’s shredder had been sharpened on all points.

Antelope cooperated with police questioning and admitted to getting in a fight over a disagreement with his cousin. It is noted in the affidavit that they call one another brother.

“I asked what the disagreement was over and Elias stated ‘nothing really, we were drunk,” Alquist said in the affidavit.

Tail confirmed that Elias hit him with the meat shredder, but he did not want to press charges. Tail showed Alquist multiple lacerations on the back of his head, one of which had several staples.

Tail said he went to the hospital between 9 and 10 a.m. “because he thought he was going to bleed out.”

The affidavit said Alquist was contacted by Elias Antelope’s father who requested a welfare check on his son. Antelope had called his father asking to be picked up after a fight at his mother’s house and a hospital visit.

On his way to the residence Alquist was notified that Antelope had a warrant out for his arrest with a $270 bond.

Tail admitted officers into the residence where Antelope was asleep on the couch and had to be woken up by Tail. Alquist noticed visible scratches on Tail’s face.

While placing Antelope under arrest per his warrant, Alquist noticed “copious amounts of dried blood all over the black long sleeve shirt he was wearing.” Antelope also had swelling on his upper lip and the left side of his face.

Along with the shredder, officer Caleb Schmidt also found a brass marijuana pipe.

When asked if Antelope currently had marijuana in his possession he replied, “I wish, but no.”