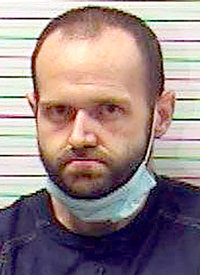 After passing thousands of dollars worth of bad checks to businesses around northern Wyoming — including some stolen from his mother and grandmother — a Lovell man is headed back to prison.

Philip K. Mickelson recently received a five- to seven-year sentence for felony counts of check fraud and forgery in Park County. Mickelson has pleaded guilty to additional felony check fraud-related charges in Campbell and Washakie counties that are expected to tack on an additional three years of supervised probation, which will be served after he’s released from prison.

Charging documents written by investigators in Cody, Worland and Gillette say Mickelson issued more than $14,000 worth of bad or stolen checks between mid-November and mid-January. Most were written on an empty account belonging to Mickelson, but two of the purchases came from checks he stole from his family, charging documents say.

Receipts reviewed by investigators indicate that Mickelson generally bought tools, with his mother believing he was reselling the items for about half of their cost.

Between Nov. 19 and Nov. 23, Mickelson wrote seven checks to buy tools, clothing and other items at the Bomgaars and Ace stores in Cody. Shortly after that, between Nov. 24 and 27, he bought dozens more items at Kennedy Ace Hardware and the Bomgaars location in Worland, charging documents say.

The purchases over that nine-day span totaled $9,935, but Tillery later learned that Mickelson’s checking account had never held more than $215.55. And he’d emptied it more than a month before starting the shopping spree.

Wary staffers prevented Mickelson from making a couple additional purchases. On Nov. 27, Mickelson tried passing his third bad check at the Worland Bomgaars, but a manager rejected the purchase and warned the Cody store to be on the lookout, charging documents say.

When he was turned down in Worland, “Mickelson’s statement to the store manager was, ‘Did those other two checks come back already?’ or words to that [effect],” Tillery wrote.

A few days later, on Nov. 30, Mickelson visited the Gillette Bomgaars and changed his approach. Instead of using his own checking account — which was eventually blocked or frozen — Mickelson presented a check from his grandmother and explained he had authorization. The trick worked for the $3,266 purchase, but Bomgaars’ fraud protection personnel followed-up; they eventually learned Mickelson’s grandmother had not written any checks for some time, as she was being treated for dementia, charging documents say.

As store and law enforcement personnel began digging into the cases, the warning to the Cody Bomgaars store proved prescient. On Dec. 14, Mickelson was turned away when he tried writing a personal check for another purchase. Then on Dec. 16, Bomgaars staff watched him fill a cart and give one of his grandmother’s checks to another man.

That man attempted to use the check, Tillery wrote, “but, again, the purchase was denied by the Cody Bomgaars staff and they [Mickelson and the other man] left the store empty handed.”

Mickelson switched tactics again on Jan. 16, that time using a check from his mother’s account to buy $842 worth of tools at Cody Ace Hardware. However, his mother’s bank flagged the check as suspicious and she told police that Mickelson had stolen the check and forged her name. The woman “expressed a desire to pursue charges against Philip Mickelson,” Tillery wrote.

Mickelson has a prior criminal record that included serving a five- to seven-year prison sentence, after he delivered a controlled substance in Big Horn County in 2012 and violated his probation in 2014.

Mickelson had asked for leniency and a reduced sentence in July 2015.

“The pain and grief I have caused so many others due to my poor choices have resulted in my incarceration and while I do believe that was necessary for what I have done … I feel I need to help my family and the community to heal and move on,” Mickelson wrote to the Big Horn County District Court. He specifically expressed remorse that he had not been able to be present in his grandmother’s life, “when she needed me so very much” while suffering from Alzheimer’s disease.

Mickelson said drugs and alcohol had contributed to his actions and that he was a good person at heart, being “willing to make amends to my family and the community.”

His request for a sentence reduction was later denied. He completed his term and had his voting rights restored in early 2019, but the bad checks and unauthorized use of his family members’ accounts began in the fall of 2020.

Mickelson was sentenced in Park County in June and was ordered to pay $5,592.56 in restitution to the Cody Bomgaars and Ace stores. Meanwhile, he pleaded guilty to forgery in Campbell County last month and has agreed to pay $5,931.02 in restitution to the Bomgaars in Gillette, court records say. He’s set to be formally sentenced on Sept. 29, but the deal calls for him to receive a five- to seven-year prison sentence that will overlap with the one he received in Park County.

Additionally, he pleaded guilty to check fraud in Washakie County on July 22. The plea agreement reached there recommends that he receive three years of supervised probation that will follow his sentences in Park and Campbell counties, said Deputy Washakie County Attorney Tony Barton. Mickelson has also agreed to pay $2,974.81 in restitution.

While 13 bad checks are detailed in the charging documents, Tillery obtained Citibank records indicating that, between early October and late December, Mickelson bounced a total of 22 checks.