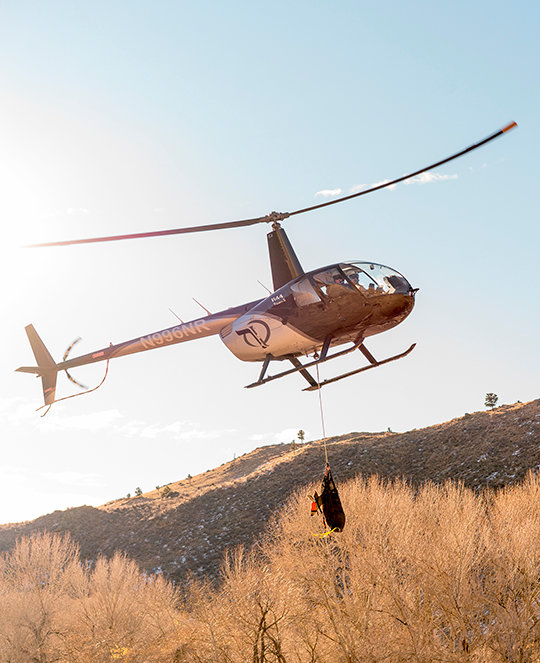 ‘Even with the bulk of information on mule deer and tested management strategies, there are no quick fixes for the decline in mule deer populations.’”
Game and Fish Department
By Mark Davis

Seeking answers for declining mule deer populations, state wildlife managers and university researchers have begun a five-year project seeking more information on mule deer than ever before collected and attempting to interpret data in a faster, more immediate and usable way.

The processing of the massive amount of data will be obtainable through a partnership with the University of Wyoming. Researchers from the university will take the immense volume of data, analyze it and return it to the department.

Jerod A. Merkle, assistant professor in the department of zoology and physiology at the University of Wyoming is leading the school’s research project.

“I got involved because my research group here at University of Wyoming specializes in managing and analyzing very large GPS collar datasets,” Merkle said.

When Game and Fish first developed the mule deer monitoring project, they reached out to Merkle to help organize, manage and crunch their data.

“My goal in all this is to turn these millions of GPS points on deer into something [like maps] that wildlife managers can use to make more informed decisions,” he said. “The GPS locations are hard to digest, and summaries of the data and options for different ways to visualize the data [like where do the animals go in late winter, or during parturition] are key to translating those data.”

Both entities have jointly hired a research scientist and data analyst to lead the work. While the person is officially hired by the university, they will have offices both on campus and at the Laramie Game and Fish office.

“The Wyoming Game and Fish Department is funding the majority of the position, and UW is partially supporting it,” he said.

The position provides a huge benefit to the university because it brings in a person that “completely bridges research and management,” Merkle said.

“This person has one foot in academia and one foot in management. Thus, students have access to such a resource to learn about how science is used in management, or what it’s like working in an agency versus at the university. Having this person at [the university] helps keep our research grounded and relevant to the issues at hand in Wyoming,” he said.

Biologists at the Game and Fish Department know a significant amount of information about mule deer and what impacts their overall success from decades of research and data collection.

“Through their research they are well aware weather, habitat and chronic wasting disease affect Wyoming’s mule deer populations,” the department said in a recent press release.

These environmental factors play a significant role in the population fluctuation of mule deer. But in the last 30 years, mule deer populations have declined to a point that is worrisome to wildlife managers and the public.

“Even with the bulk of information on mule deer and tested management strategies, there are no quick fixes for the decline in mule deer populations. However, biologists at Game and Fish believe new tools and technologies could offer more robust data to inform the management and prosperity of mule deer,” the department reported.

A main component of the monitoring project is to inform one of the most rooted and important questions for mule deer managers — how many individuals are there in a herd? Understanding abundance, as the study terms it, is the cornerstone of management. To increase abundance data, Game and Fish plans to increase surveys significantly, scaling up from surveying one herd a year to eight.

Wildlife managers are narrowing focus in on five local herds, some of which have never been intensely studied. Those focus herds are the Laramie Mountains, North Bighorn, Sweetwater, Upper Shoshone and Wyoming Range.

Work is already underway in the Laramie Mountains, according to Tara Hodges, information and education specialists for the Game and Fish Cody Region offices. Collaring in the two local herds will start in January or possibly February, she said. Deer will be netted from a helicopter and processed where they are captured, rather than transporting individual deer back to a staging area.

“We’re still a little ways out from our captures,” Hodges said. “There are a lot of variables at work here. Weather is a big variable. And if there is a delay in front of us, everything will be pushed back down the line.”

The monitoring project also will look closely at the composition of the local herds. Composition means the number of male, female and juvenile deer in the herd. This will be done through aerial counts, trail cameras and ground surveys.

A large amount of data in the project will come from 1,000 collared mule deer. The data will be key to learning about the day-to-day lives of these animals. With this data Game and Fish will be able to see where the deer go and where they stay, what habitat they use and where they avoid, giving biologists the opportunity to dig into the why. Additionally, collar data will help measure herd performance, assess causes of mortality, evaluate harvest strategies, update seasonal range maps and more.

Game and Fish and partners hit the ground running late last month deploying collars and then beginning intensive surveys. The data will start rolling into biologists’ email inboxes soon after.

The Game and Fish plans to update the public quarterly on what staff are learning.