Kaitlin Loeffen didn’t lose any games in her first year coaching girls’ soccer at Powell High School. But she didn’t win any, either. 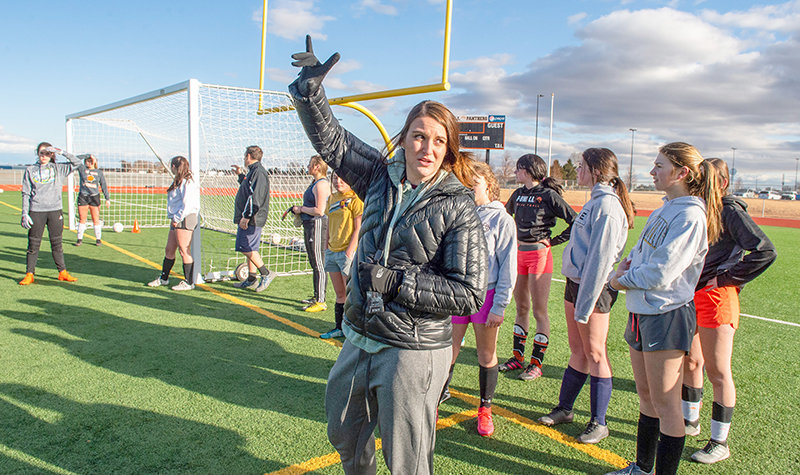 Powell High School girls soccer Coach Kaitlin Loeffen works with her squad during a March 12 practice, shortly before all practices — and all spring sports — were called off due to the COVID-19 pandemic. It was a tough first year for the coach and for her players, who lost their season.
Tribune photo by Mark Davis
Posted Tuesday, July 14, 2020 8:10 am
By Carson Field

Kaitlin Loeffen didn’t lose any games in her first year coaching girls’ soccer at Powell High School. But she didn’t win any, either.

Just days into practices in March, COVID-19 halted and then led to the cancellation of all 2020 spring sports, including soccer.

“I was devastated,” Loeffen said. “I had invested in new gear and coaching plans, and I was psyched. I told my family our schedule and to come watch us play.”

The 2019-20 school year marked Loeffen’s first time as a head coach and full-time teacher after previously student-teaching at PHS. Just a couple years before, she graduated from Black Hills State University, where she graduated with two degrees and volunteered as a coach for the local high school.

Initially, there was hope that Loeffen would be able to coach a season in the spring, even if shortened. Administrators across the state believed that Wyoming was secluded enough to keep the number of cases at a minimum.

But then the pandemic got worse. As the state’s case total increased, the Wyoming High School Activities Association made a decision to cancel all sports for the remainder of the year.

For Scott McKenzie, PHS’ athletic director, sharing this news with Loeffen was dreadful.

“It was very hard to tell Coach Loeffen and the other coaches that there would not be a season,” McKenzie said. “I had watched her and Coach [Stan] Hedges put together plans for the season, and it was going to be an exciting year for them. I joke around with her that she was undefeated in her first season as head coach.”

While it was a tough situation for the first-year coach, Loeffen’s sympathy went out to the girls who lost a season — especially the seniors.

Loeffen recorded a video that she said was “like a letter to my players.” She felt it was a more heartfelt way to break the news to her players than just a simple written message.

“I felt like a text wasn’t sufficient enough,” Loeffen said. “For me, it was not that long enough that I was a senior in high school. I just couldn’t imagine my last season being gone.

“I just tried to make it the smallest blow as possible,” she said.

Despite it burning their last year of high school eligibility, the seniors handled the situation well and set an example for the underclassmen, Loeffen said.

“I think their maturity helped because they knew there was nothing they could do about this,” Loeffen said. “They actually responded really well. They rallied, and they understood.”

Since the season got axed, Loeffen has done her best to keep the team together, but it hasn’t been easy as a result of the coronavirus. The team did have a senior night — with limited attendance — where players got to try on the new uniforms and take pictures with them. But health concerns amid the pandemic have put any other gatherings on hold.

Instead, Loeffen has stressed the importance of staying in contact virtually.

“I’ve reached out to my juniors and talked to them about their expectations for next year,” Loeffen said. “They have a group Snapchat where they’re supposed to keep in touch. But with how crazy the summer has been, we haven’t really gotten together.”

March was truly the worst time for the season to be canceled. During the weeks leading up to the season, Loeffen witnessed her players improving their skills and forming a strong team bond, and the pandemic halted this progress in its tracks.

But McKenzie trusts that Loeffen will pick up right where she left off.

“Coach Loeffen’s organizational skills are second to none,” McKenzie said. “They will hit the ground running, and it may feel like we never missed last spring.”

Loeffen plans to hold a summer camp for the girls if the state of the virus improves in time. She will also host indoor open gyms during the fall and winter to help the players sharpen their abilities ahead of the spring.

Between camp and open gyms, the second-year coach hopes to use the offseason to build a competitive program after a year of no soccer.

“We need to get ball touches, we need to work on shooting and passing — some of the fundamentals so that when we do go into preseason we’ll be more prepared than we were this year,” Loeffen said. “Focus on some of the tactical stuff, then we could do some more game strategy.

“I provide them with offseason plans, so it’s kind of up to them if they want to use it or not,” she said. “Hopefully they will have improved in the offseason.”