“It’s sort of a funny story — one of those things about being in the right place at the right time,” she said during an interview last month.

Lichtendahl went to a photo workshop in Jackson in September, which the editor of “Outdoor … 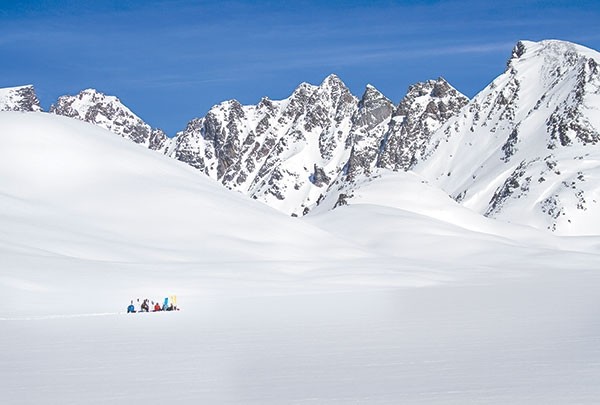 Skiers on Goose Lake, just outside Cooke City, Montana, are dwarfed by rolling hills of snow set against the craggy mountaintops in this photo taken by Kathy Lichtendahl of Clark. The shot is included with her story in the December issue of ‘Outdoor Photographer.’
Courtesy photos by Kathy Lichtendahl
Posted Tuesday, January 3, 2017 3:34 pm
By Ilene Olson

As an avid skier and photographer, Kathy Lichtendahl of Clark had an idea for a photo and story package she hoped to publish in a photography magazine sometime in the future.

But “sometime” came much faster than she expected.

“It’s sort of a funny story — one of those things about being in the right place at the right time,” she said during an interview last month.

Lichtendahl went to a photo workshop in Jackson in September, which the editor of “Outdoor Photographer” also attended.

“I said I wanted to submit a story sometime. He said he had a space in the December issue, ‘because somebody backed out on me. Can you get it to me in two weeks?’”

She wrote a story about backcountry skiing near Cooke City, Montana, and submitted it and a couple of photos from previous ski trips.

“When I proposed it originally, I envisioned going out this winter,” she said. “It ended up running with images from three and four years ago. That’s fine; it worked with the story.”

The piece, titled “Backcountry Skiing with a Camera,” tells of Lichtendahl’s love of backcountry skiing and her debut backcountry ski adventure in a small hut in the Selkirk Mountains of British Columbia with her husband, Ken, on their honeymoon in the 1990s.

“The fact that we stayed married after that week and remain so to this day is a true testament to our love of the outdoors and each other,” she wrote.

Since then, the couple’s backcountry escapades have included an eight-day ski adventure from Chamonix, France, to Saas-Fee, Switzerland; five days in the Canadian Rockies and, most recently, “a week dragging an 80-pound pulk loaded with tent and all the necessities from the Wyoming end of the Beartooth Highway across the high plateau of the Beartooth Mountains and down Mount Maurice into Red Lodge, Montana.”

“While I enjoy any chance to spend a day skiing laps up and down gnarly slopes, my real love for the sport comes in those multi-day treks into the wilderness, pushing up and over obstacles for the chance to see a vast mountainous landscape devoid of manmade structures,” she wrote.

Lichtendahl tells of her transition from taking a small point-and-shoot camera on her ski adventures to carrying a more sophisticated DSLR camera and lens in a backpack, as well as adding a GoPro on a helmet mount.

She provides information about her equipment and how she protects it on multi-day backcountry ski trips.

Lichtendahl also tells about moving to northwest Wyoming two decades ago, and the backcountry ski terrain offered in the Cooke City area, and, to a lesser extent, within Yellowstone National Park.

“Luckily for us, the (Big Horn) Basin is surrounded by mountain ranges and we can be in some of the finest powder in North America within a couple hours,” offering “some of the best back-county ski terrain I have ever experienced,” she wrote.

She describes options for day trips or multi-day excursions and gives tips on how to get to launching points by car and/or snowmobile, and a couple of rustic backcountry accommodations available for overnight stays.

Lichtendahl said Cooke City is “often described as a ‘catcher’s mitt for weather.’” The area gets more than 200 inches of snow annually.

“We have this amazing backcountry ski terrain near Cooke City, and I don’t think most people know it’s there,” Lichtendahl told the Tribune. “I would say it’s world-class backcountry skiing. It’s phenomenal. It’s pretty amazing that you can just go to Cooke City and have all the snow you want.”

For more information about “Outdoor Photographer,” visit the magazine’s website at www.outdoorphotographer.com.