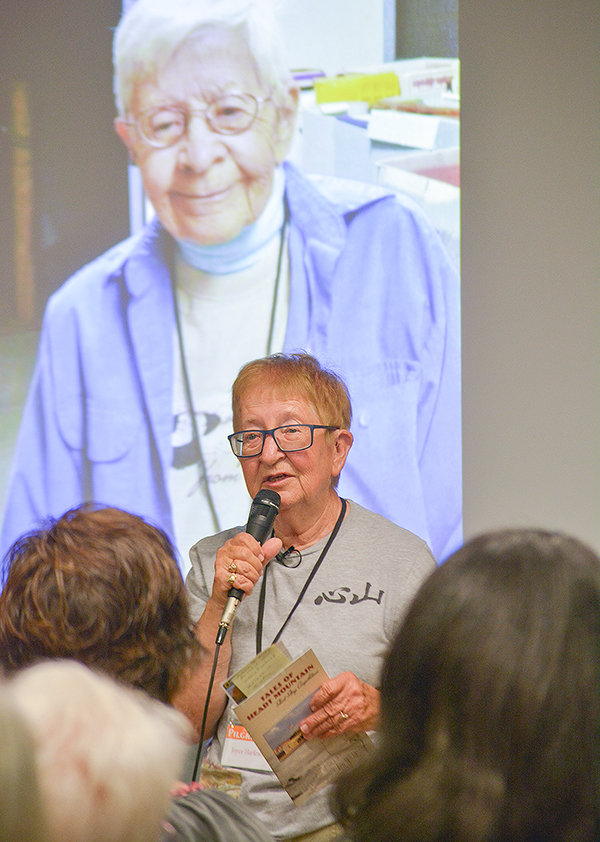 Joyce Harkness speaks about her partner, the late LaDonna Zall (shown smiling on the screen), during the annual Heart Mountain Pilgrimage on Saturday. Zall spent decades helping to tell the stories of the Japanese Americans who were incarcerated at the former relocation center between Powell and Cody.
Tribune photo by CJ Baker 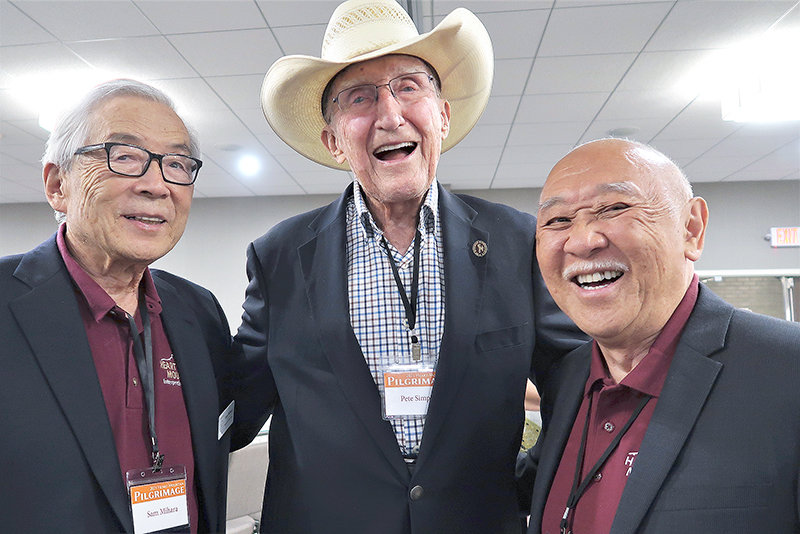 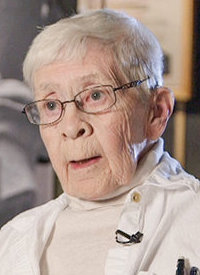 There were the armed guards, the terrible food, the awful weather and the cramped, uncomfortable accommodations at the camp, while Mihara’s father went blind and his grandfather died.

“But the worst experience,” Mihara said, “was going to downtown Cody.”

When he and other Japanese Americans from the camp eventually got a chance to visit the city, Mihara said about every third store was posted with a sign saying “No Japs.” And inside the businesses that were open to the incarcerees “everyone was frowning,” he said, “not a single smile.”

Mihara ultimately decided that he wanted nothing to do with Wyoming or its people. Nearly 50 years later, however, he passed through Cody as part of a trip to Yellowstone National Park. He inquired about touring the former camp site and was told to meet a woman in the shade of a pair of cottonwood trees just off U.S. Highway 14-A.

“I went up to her, and she smiled,” Mihara recalled. “It was the first person from Wyoming who smiled at me. And I went, ‘Oh my gosh, this is a different person.’ And she said, ‘I’m LaDonna, and I’m going to help you out.’”

The woman, the late LaDonna Zall, then guided Mihara through a farm field and right to the spot where he’d once lived. The memories came flooding back in a kind of homecoming.

“I really thank her for what she did,” Mihara said.

He was just one of hundreds of people that Zall led around the site — and the tours were just one of the many things that she did to help preserve the former camp and the stories of those who were held there.

Zall, a longtime Powell area resident, died last month at the age of 87; at a Saturday memorial service hosted by the Heart Mountain Wyoming Foundation, speakers recalled and honored her more than three decades of service.

“LaDonna was in many very real ways the essence and the soul of the Heart Mountain Wyoming Foundation,” said Doug Nelson, the nonprofit’s vice chair, “and for me it’s hard, at least right now, to imagine this foundation without her.”

As an 11-year-old, Zall cried as she watched the final traincar of incarcerees leave Heart Mountain in November 1945, as the U.S. government freed the last of the Japanese Americans.

“She was filled with sadness at what, as a little girl, she instinctively knew had been hurtful and wrong,” Nelson said. “And that empathy, years later, led her to try, in so many different ways, to set things right.”

In 1989, Zall became involved in what would become the Heart Mountain foundation. She quickly became the first registrar and curator of the materials that would eventually form the basis of the Heart Mountain Interpretive Center; she also donated faithfully to the foundation and inspired others to support the nonprofit as well.

“She always wanted to do everything for the program,” said Zall’s life partner, Joyce Harkness.

In her book, “Tales of Heart Mountain,” Zall wrote that she had “the best job of all.”

“I get to meet nice people, hear their stories and see the wonderful artifacts that they permit us to care for,” she wrote.

Although the pandemic hindered her efforts, Zall had been helping to index all of the names that appeared in the camp’s newspaper, the Heart Mountain Sentinel, so a search for a person turns up all of the articles in which they are mentioned. That work is expected to wrap up in the coming months.

Nelson said there was no way to measure all of the contributions Zall made to the foundation, which is celebrating its 25th anniversary, and the interpretive center, which is marking its 10th.

“But it’s not those contributions alone, which we are missing today: We are also mourning the loss of one extraordinary human being,” Nelson said, praising Zall’s authenticity, honesty, courage, warmth, kindness and compassion.

The Heart Mountain Wyoming Foundation issues an annual LaDonna Zall Compassionate Witness Award, which recognizes “individuals whose families were not incarcerated during World War II, but who nonetheless have worked to expand awareness of the Japanese American incarceration.”

This year’s recipient was Pete Simpson of Cody, a member of the foundation’s board of directors, historian and educator. Board chair Shirley Ann Higuchi said Simpson “has long been an icon and representative of what Wyoming is great for.”

In selecting Simpson, the board specifically noted how he’s supported the mission to educate the public about the mass incarceration of Japanese Americans; inspired thousands of Wyoming residents to seek higher education and public service; and helped inspire the creation and development of the foundation.

Simpson called the award the best and most important he’s ever received, though he said no one carried out the mission of preserving the memory of the Heart Mountain Relocation Center better than Zall.

“This place wouldn’t be here without love — and that’s who brought it, right there,” he said, pointing toward a smiling photograph of Zall on display. “She loved what she did, she had empathy for it and she didn’t seek self-aggrandizement for it.”

While Zall often spoke of the emotion she felt while watching the last train leave, Simpson recalled a visit to the camp with his Boy Scout troop. He shared a specific memory of throwing a football around with a Japanese American boy and being invited inside the boy’s small tarpaper shack, where his mother offered a cup of hot cocoa.

The gesture impacted Simpson in a way that still moves him today.

“All of us carry with us — all of the incarcerees and their descendants ... — carry this emotion as a part of what we do,” he said, “to make sure nothing like that can occur again.”