A jury made up of a dozen local residents awarded more than $1.3 million to Richard Schlenker and nearly $980,000 to his father, Bill Schlenker, after a five-day trial in late July.

The Schlenkers had been driving on Park County Road 3LE between … 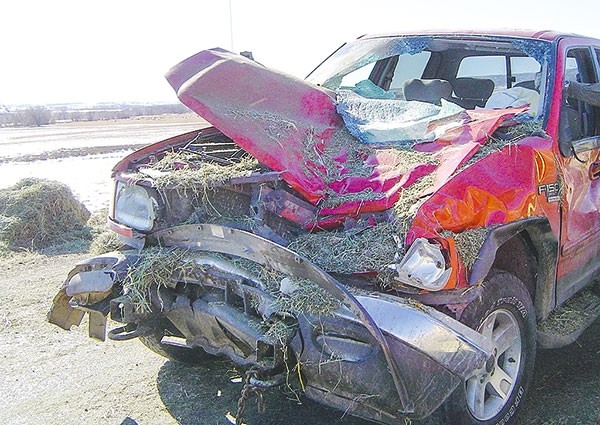 Rejecting the defense’s claims that the verdict was too large, a judge has upheld a jury’s nearly $2.3 million award to two Meeteetse men who were injured in a 2010 crash.

A jury made up of a dozen local residents awarded more than $1.3 million to Richard Schlenker and nearly $980,000 to his father, Bill Schlenker, after a five-day trial in late July.

The Schlenkers had been driving on Park County Road 3LE between Meeteetse and Burlington when their pickup was hit by hay bales that were thrown from a trailer driven by Terry B. Jones of Otto.

According to the Schlenkers’ attorney, Jones “grossly” overloaded his truck the day of the Feb. 10, 2010, crash and took a sharp, blind curve too fast. When Jones swerved to avoid the Schlenkers, that whipped his pup trailer around and slung some 29,000 pounds of hay toward the Schlenkers’ truck at 50 mph; the impact knocked the Schlenkers’ vehicle 120 feet backwards and off a 15-foot embankment, Cody attorney Steve Simonton said in court filings.

Jones admitted liability for the crash, making the trial mostly a matter of figuring out how much money the Schlenkers should receive.

The father and son said they were knocked unconscious, had bones fractured and continue to suffer lasting health problems.

It’s believed to be the second-largest jury award in Park County’s history.

Defense attorney James Bell of Casper — hired by Jones’ insurer, Liberty Mutual subsidiary Colorado Casualty Insurance — contended that a heated remark from Simonton alerted jurors that the insurance company would be liable for any damages.

“One need only look at the size of the verdict which was rendered by the jury in this case to realize that the actions of the plaintiffs’ counsel have translated into a truly excessive verdict,” Bell wrote of Simonton. Because rules of evidence prohibit jurors from learning whether there’s insurance coverage in these kinds of negligence cases, Bell called on the judge to throw out the jury’s “shocking and breathtaking” award.

Judge Cranfill, however, rejected that view.

“The jury heard evidence over five days of trial about the injuries suffered by both plaintiffs as the vehicle they were in was catapulted over a hundred feet backwards and off of an embankment after being hit by the defendant,” Cranfill wrote on Nov. 29.

Cranfill said there was no evidence that the jury’s verdict involved any other than weighing the evidence and following their instructions.

“To the contrary, the jury appeared to carefully consider the evidence and awarded the amounts based on the evidence presented at trial,” he said.

Cranfill officially rejected the defense’s requests in a Dec. 13 order.

The words at the center of the request for a mistrial were uttered by Simonton during an argument about whether Jones should have to pay for new replacements of Richard Schlenker’s clothes and computer, which were damaged in the crash. (The items totaled roughly $1,600, according to court records.)

“Clearly, the work coat, overalls, the work boots, they were all used,” Bell argued at the July trial. “And I don’t think a new price for work boots that have been used for a year or two is a proper measure of damages, so I object.”

Simonton, as he would later put it, “allowed emotions to take over for a moment” when he responded.

“I think that is — I want to say outrageous — but at least not understanding, when a guy’s clothes are all cut off of him that he goes and gets a replacement and doesn’t keep receipts because he isn’t planning on doing a lawsuit,” Simonton said, adding, “Those are the things he paid to replace the things that were ruined when this guy ran into him.”

Simonton said his client was entitled to testify to his best memory of what the things cost.

“I don’t think he is an adjuster who sits there and …,” Simonton said, gesturing toward the defense.

“That is what you’re asking him to do,” Simonton continued, “is depreciate things.”

Cranfill called a break and the jury was excused from the courtroom; Bell asked for a mistrial.

Bell argued Simonton had been gesturing toward a representative for Colorado Casualty and had improperly introduced evidence that Jones had insurance.

Cranfill declined to declare a mistrial, instead telling the jury to disregard Simonton’s “inappropriate” remarks; Simonton also gave an apology.

But Bell renewed his request for a mistrial after the jury rendered its verdict, saying Simonton’s remarks spurred a “punitive” award from the jury.

“There can be no other explanation,” Bell wrote.

Simonton, however, said the award reflected “the sheer strength and impact” of the Schlenkers’ case and the lack of any real defense by Jones.

“To rip the ability to do the things which this father and son loved was shown to be catastrophic to each. The jury understood that they were needlessly deprived of the ability to enjoy the activity that gives each of them identity and meaning to their life,” he wrote.

One of the jurors also submitted a sworn statement saying she had no idea that Simonton might have been referencing an insurer.

Colorado Casualty has roughly one more week to decide whether to appeal Cranfill’s ruling to the Wyoming Supreme Court.