The Music Ranch Radio station is located in Red Lodge, Montana, but its reach is considerably further. Since 2014, it’s had listeners from 187 countries — including some fans in … 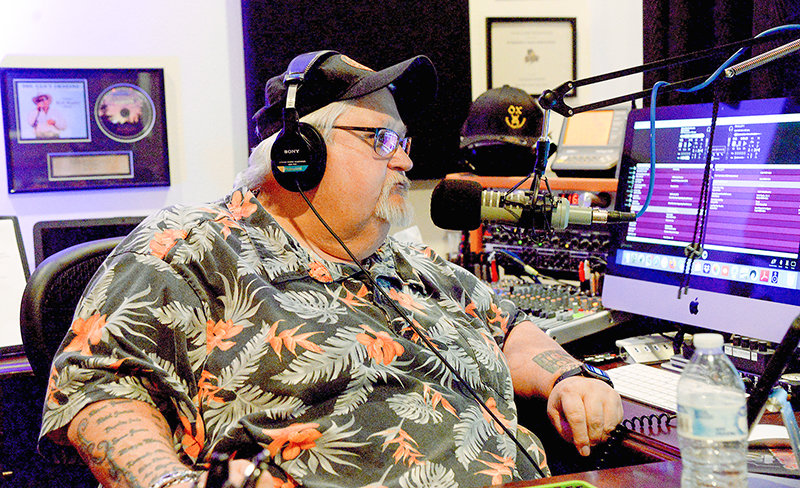 Jimmy Kujala was 9 when he landed his first paying gig. He has a lifelong love of music, and when he retired he founded Music Ranch Radio, which has a commitment to supporting independent artists. From his desk in the Music Ranch Radio studio outside Red Lodge, Montana, he goes live weekdays from 1 p.m. to 3 p.m.
Tribune photo by Kevin Killough 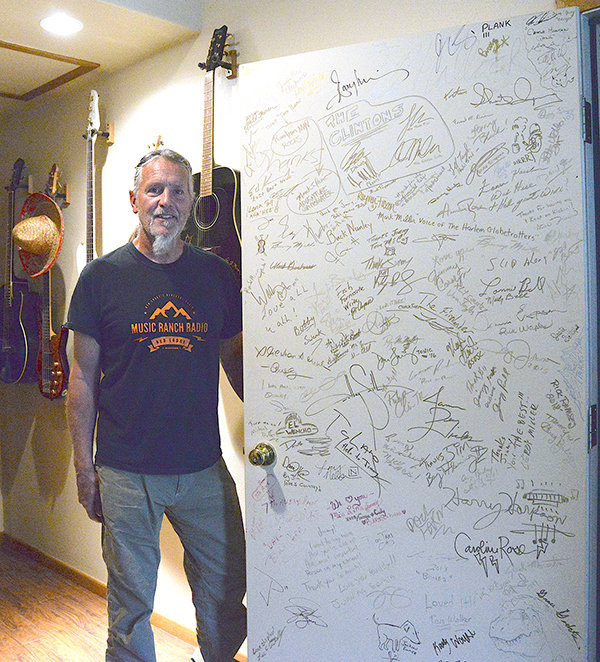 Music Ranch Radio DJ and geologist Greg “Rock Star” Creasy stands next to the door of Jimmy’s Roadhouse, a 40-seat live venue in the Music Ranch Radio studio. The door shows off the signatures of the dozens of musicians the venue has hosted.
Tribune photo by Kevin Killough
Previous Next
Posted Tuesday, June 29, 2021 8:20 am
By Kevin Killough

The Music Ranch Radio station is located in Red Lodge, Montana, but its reach is considerably further. Since 2014, it’s had listeners from 187 countries — including some fans in Powell.

All day, every day, the station streams artists from a range of different genres online. Local musicians Paul Faxon, Rayven Moore and Noah Faxon have all been featured on the station’s “Independent Spotlight” show, which airs every Wednesday from 7 p.m.

“You might hear Foo Fighters one minute and Merle Haggard the next,” said the station’s DJ and founder, Jimmy Kujala.

Kujala estimates he has about 3,000 songs in the 24/7 rotation. He has ranchers who play the station for their crews while they’re branding, because he’s always playing a little something for everyone.

Thrown into the mix are hundreds of independent artists, whether they play heavy metal, folk, country — you name it.

“The whole premise of the radio station is to support independent artists,” Kujala explains.

The DJ has been a life-long music lover. He had his first paying gig when he was 9, at the Snag Bar in Red Lodge. At one point in his life, he traveled the country, touring up to eight weeks at a time.

Today, he has six kids of his own, on top of several grandkids. He’s tattooed several of their names on his arm.

“There’s three more that need to go on there,” the DJ said.

Behind his chair in the studio are a couple mixers, one with effects for the artists that perform live on the air. Kujala is surrounded by microphones on boom arms. On the wall in the hallway hang four acoustic and electric guitars.

Next door to the studio is the 40-seat live venue called Jimmy’s Roadhouse. It has a bar where people can sit and look through a window into the studio, and at the front of the station is a production studio.

“Anyone can call in and request just about any song. And Jimmy plays it,” said Greg Creasy, the station’s other DJ and co-host. He’s a geologist and operations manager for the Yellowstone Beartooth Research Association, which earned him the nickname The Rock Star.

The station plays no sports, no politics and no religion — nothing controversial.

Some profanity might slip into the lyrics of some songs, but otherwise Kujala keeps it clean.

“I’m old school. I came from a time when you respected people. Know what I mean?” Kujala said.

Back in 2014, Kujala owned a Kawasaki dealership in Red Lodge, where he sold the brand’s Mules, motorcycles, and ATVs. It did well in its 24-year life, but he decided it was time to hang it up.

“I was just tired of it,” Kujala said.

In retirement, he wanted to get back to music and was kicking around a few ideas when a friend suggested he should have his own radio station. In a matter of days, Music Ranch Radio was born.

“I remember when I saw I had three people listening. I was like, ‘Oh my god, this is cool,’” Kujala recalled. “I couldn’t believe people were tuning in and listening.”

Kujala has a lot of connections in the music meccas of Nashville and Los Angeles, and he started giving performers airtime on his radio station.

“Pretty soon, they would call me to say they’re releasing a new song,” Kujala said, as he showed off a stack of CDs that artists have sent with samples of their music.

In its nearly seven years, Music Ranch Radio boasts 174,000 sessions (an analytic measurement of interactions with its website) and about 50,000 unique listeners.

When Kujala started the operation, most traditional radio stations dismissed the idea of internet radio. Now, they all have live streams.

Most often, people listen to radio in their cars, which has been a barrier for internet radio to reach listeners. Now, with
nationwide connectivity on phones and car media systems, that barrier is vanishing.

“I’ve had people listen to me from one end of the U.S. to the other,” Kujala said.

However, despite opening up to streaming music, he said corporate radio hasn’t done much for the independent musicians.

When the federal government deregulated media ownership beginning in the mid-1990s, — allowing companies to own multiple outlets in a single market — corporations began buying up local radio stations. If a station doesn’t do well, it’s shut down, and one DJ will do all the work for 15 stations.

Fortunately, the internet has opened up another avenue for independent artists to get heard.

Scrawled across the door leading into Jimmy’s Roadhouse are the artists who have performed at the venue over the years. A number of them have also placed stickers on the refrigerator, including Bones in the Road, in which Paul Faxon plays guitar and sings.

In the summer of 2019, them Red Lodge venue had artists performing twice a month. The COVID pandemic shut them down for a year, but this year they’re hoping to up the game and do even more shows.

On July 10, Robert Klein Jr., from Muscle Shoals, Alabama, is going to perform. His blurb on “Independent Spotlight” describes his music as ranging from Texas bar house country rock to bare-bones acoustic ballads.

Creasy goes home every year to Illinois, and their spotlight show has featured a number of artists he’s run into out there. That includes Jimmy Nick, a musician out of Crystal Lake, Illinois. Creasy heard Nick was playing in an Illinois bar one night and was so impressed he called up Kujala.

“I told him we gotta get this guy on ‘Independent Spotlight,’” Creasy said.

They’ve had some bigger names on the show, such as Ivy Ford, a Chicago blues performer, and Abby Kasch, who was recently featured on The Voice.

Some visitors to the Roadhouse this summer came up from Frederick, Colorado; they had been buying a Lexus there when they heard Music Ranch Radio playing in the showroom.

Despite having a wide reach, the internet brings Music Ranch Radio fans together. Close to 1 p.m. every day, the board starts to light up as people tune in to hear Kujala go live.

If he’s late getting started or the stream goes down, texts and emails come in asking what’s up. He’s learned to recognize the IP addresses of some of his regular listeners, and he’ll give them a shout out on the air to thank them for listening.

“When you do that, they feel like it’s their show. It’s a pretty cool deal,” Kujala said.

He’ll sometimes give a shout out to Paul Faxon, when the farmer is working in the fields around Powell, and Faxon will text a hello back to Kujala.

Besides thousands of dollars of equipment, there is an expense involved in running the station — including a license from the American Society of Composers, Authors and Publishers (ASCAP) to play copyrighted music and the server service. Kujala sells some ads to help cover it, but he doesn’t put a lot of energy into the financial side of things.

“If I had to do this for a living, I wouldn’t do it. I do it because I love it,” he said. “The ad revenue is good enough that I can make it work.”

With corporate radio killing local radio and not supporting the people making the music, Kujala said he wishes more people would start independent internet radio stations. He has people call up to ask how to do it, and he’s happy to lend his expertise.

“I would like to see more people do it. To me, it’s just a shame that the artists are getting robbed,” the DJ said.

Kujala seems pretty happy sitting behind the desk in his studio. With an Apple computer, a switchboard, and a couple mixers at his fingertips — on top of a playlist that’s the envy of any music lover — he’s bringing a lot of great music to people.

To listen to Music Ranch Radio, check out www.musicranchradio.com.