I wasn’t born this way

I’ve been quite irregular as of late, due to a column roughage deficiency. My writing has been so infrequent, I feel I should introduce myself, pending the blessings of my Tribune superiors, …

I wasn’t born this way 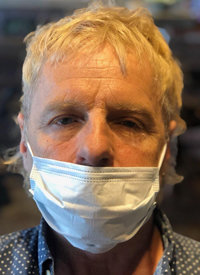 I’ve been quite irregular as of late, due to a column roughage deficiency. My writing has been so infrequent, I feel I should introduce myself, pending the blessings of my Tribune superiors, which doesn’t necessarily make me inferior. I fully intend on becoming more of an editorial page regular, God willing and the creek don’t rise. As my new photo — taken in the stylist chair with the required facewear — will bear witness, I’ve reinvented myself.

Many now call me “Doug Exotic,” but I assure you my blonde metamorphosis was not born of a whim. It was our sports panel, the radio talk-show on KODI, “Sports Nut of the Round Table,” that backed me into a corner. Oh, I’ve known my share of corners, but a flippant challenge coughed up by Sports Nut moderator and Powell Legion Baseball assistant coach  Ryan Brown made this one difficult to extricate myself.

I believe his exact words were, “I guarantee Doug and I would beat Jay and Lincoln in a golf match.” I wasn’t about to risk my competitive gambling reputation, so I said something in the neighborhood of “He speaks for both of us; bring it on, clowns.” Well, a month later the epic match materialized – live-streamed on the Sports Nuts Facebook page — and after 18 holes and a dead tie thanks to my chip-in from 30 yards out on No. 17, a one-hole sudden-death playoff commenced.

Due to Lincoln’s ensuing, massive drive, Ryan and I lost by one stroke and the $50 per head was in the books. But that’s far from the worst of it. We each had our personal-prioritized cross to bear, and mine was to have my hair dyed yellow like Netflix’s “Tiger King” that everyone seems to think is my doppelgänger. And THAT, my newfound reader friends, is why I look like I do. I don’t breed and neglect scores of tigers, nor have I been married to four separate men, nor am in prison for a murder-for-hire plot against my animal preserve rival. I just look eerily similar to the guy.

My wager loss fulfilled after sitting under Michelle Imburgia’s “Strandz” hairdryer, sniffing a Sulphur-smelling goo, I had barely caught my breath when I find out Ryan — a promoter not seen since the likes of Don King — had entered me and Lincoln in another head-to-head battle I hadn’t volunteered for. This time the money involved won’t come from my moth-ridden pockets, but hopefully from more plentiful ones vulnerable to a great cause. It doesn’t get any more worthy than Cody and Powell’s animal shelters.

In a weird irony, I’ll be seeking money for your City of Powell/Moyer Animal Shelter, though I was president for two years and on the board of Cody’s shelter for seven years back in the early 2000s. I demanded to know what kind of thought process went into this before realizing Lincoln’s mother, the irrepressible Jan Riley, is the new, recently elected president of Park County Animal Shelter. But they both depend on our animal-compassion.

Here’s the rub: Like I wasn’t out-of-character enough, my penalty this time, should I raise less money than the nearsighted umpire/referee Lincoln, I theoretically will be “bear-walking” around the basepath of Ed Lynn Memorial Field during this weekend’s state Legion tournament in Powell. Did I mention my torn rotator cuff diagnosed over a year ago has suddenly flared up to an alarming, Advil-popping degree? This hands-and-feet crawl around the bases could lead to months of painful rehab while trying to care for myself one-handed with no wife or girlfriend to help with … shall we say, bathroom duties.

Please don’t let this happen to me. I am already involuntarily blonde; months in a sling won’t make my path any less bumpy and unattractive. If you sadistically don’t want to do it for my benefit, do it for all those lonely animals desperate for a home. It’s as simple as logging onto www.mybighornbasin.com and clicking on Doug Exotic.