How Brynn Hillman turned a fun baking hobby into a business

There’s a perfectionist energy Brynn Hillman pours into each baked-goods order she fills.

Hillman, a sophomore at Powell High School, is a stand-out runner on the school’s track …

How Brynn Hillman turned a fun baking hobby into a business 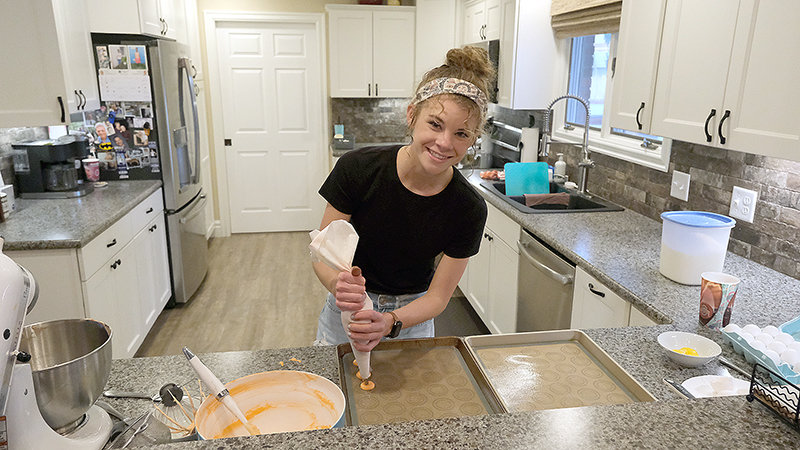 On a weekday evening, Brynn Hillman works to fill an order of macarons in her family’s kitchen. Last year, she began selling her baked goods online. She exhibits a high degree of professionalism in ensuring the recipes come out just right for her customers.
Tribune photo by Kevin Killough 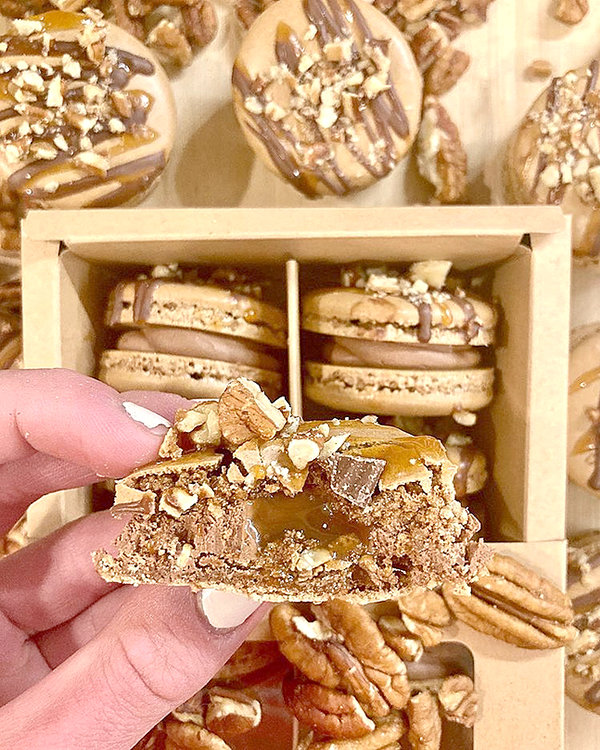 Brynn Hillman does all her own marketing photos, using only her cellphone, and then posts them on her Instagram account, where her customers can look at her menu and place orders. This photo of her turtle macarons shows off the pecans, chocolate, and caramel.
Courtesy photo
Previous Next
Posted Tuesday, May 10, 2022 8:20 am
By Kevin Killough

There’s a perfectionist energy Brynn Hillman pours into each baked-goods order she fills.

Hillman, a sophomore at Powell High School, is a stand-out runner on the school’s track team.

This makes her business, Brynn’s Bakery, just one of many activities she’s involved in. From the dedication she gives her baked goods, it may come as a surprise it’s only a side gig.

One of Hillman’s most popular items are her macarons. They come in dozens of varieties, including fruity pebbles, peanut butter and jelly, pumpkin spice cheesecake and crème brulee.

Sweet and fun as the treats may be, she knows what she’s doing and takes it seriously.

“Macarons are really finicky,” Hillman explained as she separated the yolks from eggs. “You have to make sure the egg whites are at the right temperature.”

She wipes her baking mats down with vinegar because, she said, even a thin film from the soap during washing makes the gourmet cookies rise outward rather than upward.

She said making the perfect macaronage — a fancy term for the cookie batter — requires a precision technique in which you fold the whipped eggs into the properly sifted dry ingredients.

Even the consistency has to be just right to pass the teen’s quality test. It has to stay stiff when scooped up from the bowl, and then it has to fall off the spoon just right. Adding the food coloring to get just the right color leads to another round of tinkering.

Partway through the mixing, she stops when a customer drops by the house to pick up an order of strawberry cheesecake cookies. The items are arranged in a bakery box that looks so professional it’s hard to tell a teenager put it together.

When Brynn returns to the kitchen, she squeezes the macarons batter onto the baking mat with a piping bag. She then watches carefully as the cookies rise in the oven.

Brynn learned all she knows about making macarons from YouTube videos. She has a few recipes of her own she developed by experimenting with variations on recipes she got online.

Sometimes the experiments don’t go well, and sometimes she makes a mistake that ruins a batch. It’s not that they don’t taste good. They just don’t quite meet her standards of perfection.

“I just give them to my friends, and they like them,” she said.

Before she was making macarons, baking was just a fun hobby. She baked a salted caramel apple pie for a church fundraiser. The pie was a big hit with the churchgoers, and someone offered to pay her to bake another one. Last year, when Brynn wanted to make some money for Black Friday shopping, she saw the perfect way to get some spending cash.

Amy Hillman, Brynn’s mom, recalls lying on the couch trying to recover from an illness when her daughter came into the living room and asked if she could create a Facebook page to sell her baked goods. Hazily, Amy gave Brynn the go-ahead.

Brynn later migrated over to Instagram, where she posts her own marketing photos. She displays her macarons with crisp, bright photos that appear as if they were made in a food studio.

“She did this all on her own,” Amy said.

Brynn’s father, Jason Hillman, recalls the day a new tool for Brynn’s business unexpectedly showed up on the doorstep. The teen wanted to toast the tops of her s’more and crème brulee macarons.

“It was a bit alarming when a blow torch showed up at the house,” Jason said.

Besides taking orders online, Brynn has provided baked goods for birthday parties and recently, a baby shower. She also satisfies a weekly order of macarons and cake pops — a piece of chocolate-dipped cake on a stick — to Heart Mountain Mudd, a coffee hut owned by Dana and Zack Thorington.

Dana said people roll up for their caffeine boost and the kids want to get a little treat. Dana asked Brynn if she could make the cake pops. After messing around with the recipe and sizing, Brynn produced a popular snack people can grab with their coffee order.

Later, Brynn asked if Dana wanted to offer some of her macarons. It all worked out well, and now Brynn supplies the business with a weekly order. Dana said Brynn adds decorations to the items, which makes them different each week.

“I sell out every week. It’s pretty awesome,” Dana said.

While Brynn has seen a lot of success in her bakery, she doesn’t know if it will turn into a career. She’s flirting with the idea of going to medical school to be a physician’s assistant, but admits running her own bakery could be fun. She’s got a couple years to decide.

At the Hillman household, Brynn has become a regular fixture in the family kitchen.

“Every night she’s in the kitchen until 10 o’clock at night,” Amy said.

Her older sister, Jenna, is about to graduate, and there is family coming in. Brynn herself has finals coming, and it’s going to be a busy time. So, her parents told her to suspend baking for a while.

Brynn insists it was her idea to take a baking break. Whatever the case, she will resume taking orders at the end of May.