Hot bats helped fuel the Powell Pioneers to a strong two-game sweep over the Lovell Mustangs on Wednesday — winning the contests 9-6 and 13-1 to move to 3-1 in the A Northwest. 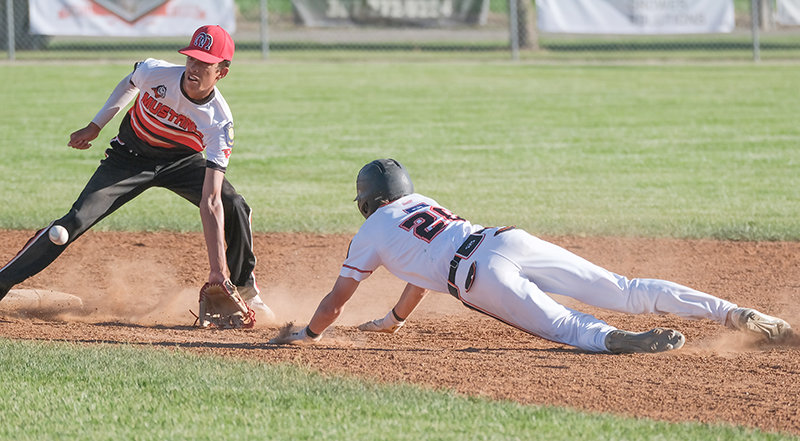 Trey Stenerson puts all his effort into a dive, attempting to beat the tag. The Pioneers swept Lovell in a doubleheader on Wednesday, moving into second place in the A Northwest standings.
Tribune photo by Seth Romsa 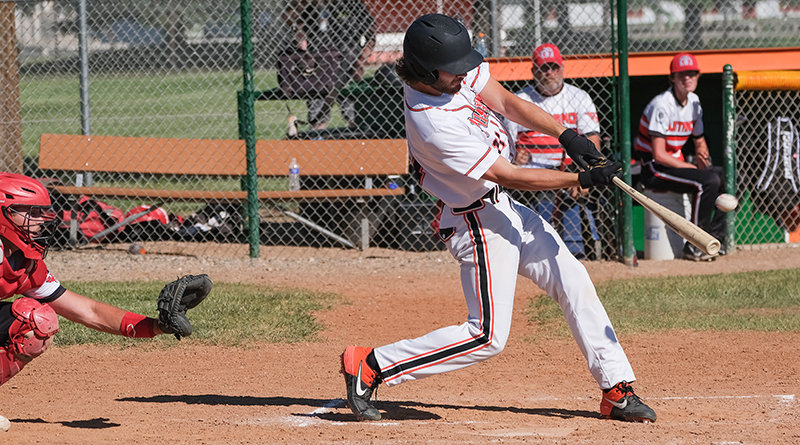 Swinging through with power, Nathan Feller tried to help keep the Pioneer bats hot during a doubleheader sweep of Lovell on Wednesday.
Tribune photo by Seth Romsa 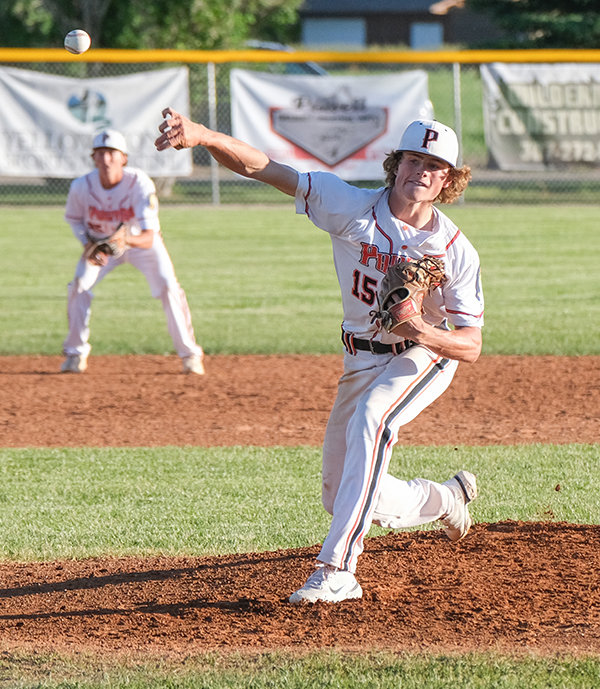 Brock Johnson had a strong day at the plate and on the mound, helping lead Powell to a 3-1 record in the A Northwest.
Tribune photo by Seth Romsa 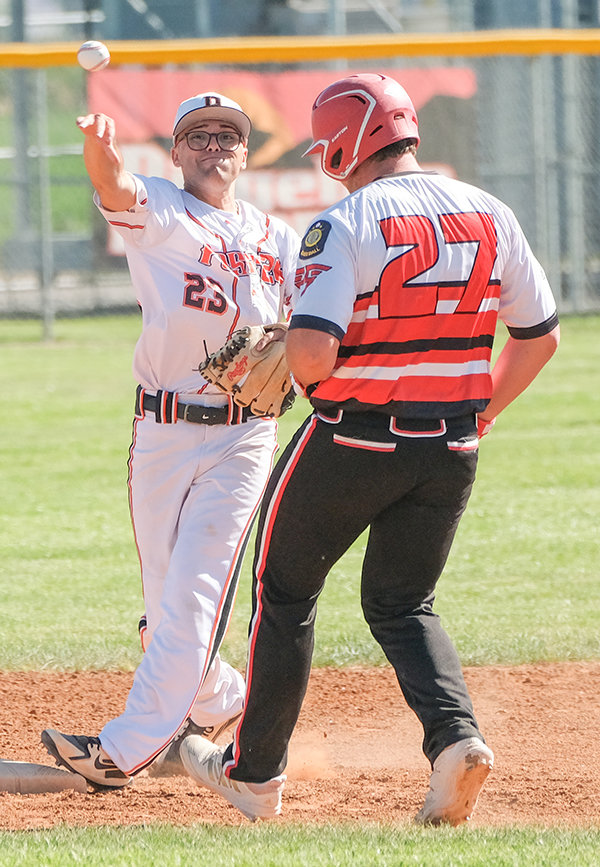 Aidan Wantulok launches the ball towards first in hopes of completing the double play on Wednesday against Lovell.
Tribune photo by Seth Romsa
Previous Next
Posted Tuesday, June 28, 2022 8:25 am
By Seth Romsa

Hot bats helped fuel the Powell Pioneers to a strong two-game sweep over the Lovell Mustangs on Wednesday — winning the contests 9-6 and 13-1 to move to 3-1 in the A Northwest.

In the first matchup between the two teams in three weeks, Powell (21-16-1 overall, 3-1 A Northwest) looked to take advantage of recent momentum at home to stay ahead of Lovell (19-11 overall, 1-5 A Northwest) in the quadrant standings.

Lovell got on the board first in the second inning, scoring on an errant throw to first base to make it 1-0.

Powell answered in the bottom half, scoring one on a sac fly by Dalton Worstell that brought in Aidan Wantulok who reached earlier in the inning on a leadoff single.

The game remained tied going into the bottom half of the third, where the Pioneers got some much-needed help from the batting department.

Jhett Schwahn got things started, hitting a deep ball to right field for a double.

Cade Queen reached first after being hit by a pitch, setting up Trey Stenerson to help the Pioneers take the lead.

After taking a first strike looking, Stenerson stepped back up to the plate and struck a deep ball to left field over the wall — giving Powell a 4-1 lead on a three-run homer.

Lovell did not go away easily.

In the fourth inning, a double to deep center field brought in two runs, cutting the lead down to 4-3.

The Mustangs continued to apply pressure, scoring two more on a single and an error to make the score 5-4.

Following two straight outs to start the bottom half of the fourth, Powell loaded the bases on a single by Brock Johnson and walks to Schwahn and Queen.

Walks to Stenerson and Wantulok brought in two runs, making the score 6-5.

With the bases still loaded, Aiden Greenwald took advantage of a pitching change on a single to center field — bringing in two runs and extending the lead out to 8-5.

The Mustangs got one more on the board in the sixth on a ground out to first, keeping the score within striking distance.

Powell scored one more on a Stenerson single to center that brought in Schwahn, who reached first base after being hit by a pitch to lead off the inning.

The Pioneers got all three batters out in the top of the seventh, finishing the first game 9-6.

“I thought we played great in all three phases of the game,” Pioneers Manager Jason Borders said. “People would look at the stats and not think Jacob Gibson had his best game on the mound, but I think he pitched great.”

Stenerson led the way for Powell, finishing 2-3 at the plate and driving in five runs.

The break did not cool down the Pioneer bats, as Powell came out swinging in game two.

Johnson got things started on the mound, as the Mustangs first three batters were retired.

Leading off the hitting, Johnson hit a deep shot to left field — his first home run of the season to make it 1-0.

Schwahn was hit by a pitch to reach base and Queen popped out, bringing Stenerson up to the plate.

Stenerson continued his hot hitting from the first game, as a crack of his bat hit a deep shot to left field for his second home run of the day.

The two home runs moved Stenerson’s total to five on the season.

“Getting those home runs early was huge,” Borders said. “Lovell is typically a team that can battle back from four or five runs, but I felt like those home runs threw them out of whack early.”

Walks to Wantulok and Greenwald set up Worstell to drive in one more run, making it 4-0 after the first.

The momentum from the first inning carried over into the second, with the bases loaded Stenerson hit a sac fly to left field — bringing in another run making it 5-0.

Lovell got one run back in the third, scoring on a single to third base.

The first three batters got on base, setting up another string of runs for the Pioneers.

A Keaton Rowton single turned double on an errant throw brought in two runs to get things started.

Johnson hit a sac fly, Rowton scored on a passed ball, a Wantulok double drove in three and a Worstell single brought in another to cap off an eight-run inning, making it 13-1.

Johnson continued his strong play on the mound, as he finished the final two innings to complete the game, giving up only four hits and one run.

Following the victory, the Pioneers have now won seven of the last eight contests, moving Powell to its highest record above .500 for the season.

After the sweep of Lovell, the Pioneers essentially locked up at least the No. 2 seed from the northwest at the district tournament next month due to its 3-1 record in head-to-head with the Mustangs.

Powell now looks to take a bigger step, as the Pioneers host Cody (20-15 overall, 2-0 A Northwest) with the opportunity to make a push toward the No. 1 seed.

The two teams squared off earlier in the season in a tournament in Jackson where Cody walked away with a 10-2 victory.

Borders knows that both teams have been experiencing different seasons altogether compared to last year, but that they both will be ready for the conference doubleheader.

“I have been listening to their tournament all weekend trying to get a feel of what to expect,” Borders said. “I hope we can find the same consistency that we had against Lovell.”

First pitch is slated for Tuesday (today) at 5 p.m. with the second game scheduled to start at approximately 7 p.m.