Coming into the Pinnacle Bank/Powell Invite, members of the Panther cross country team were looking to run their best times of the year, trying to do their best for the home crowd before the … 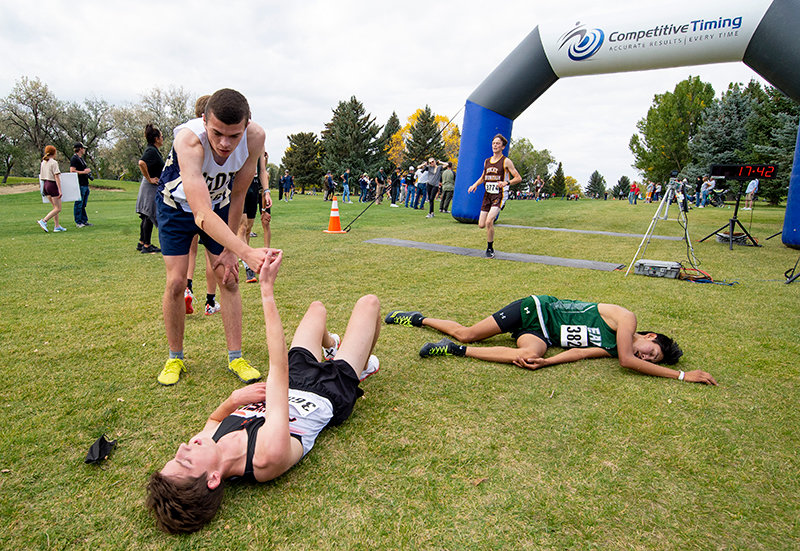 Daniel Merritt is comforted by Cody runner David Juergens after running his best time ever at the Powell invite. Merritt finished with a time of 17:04, taking third place at the meet.
Tribune photo by Mark Davis 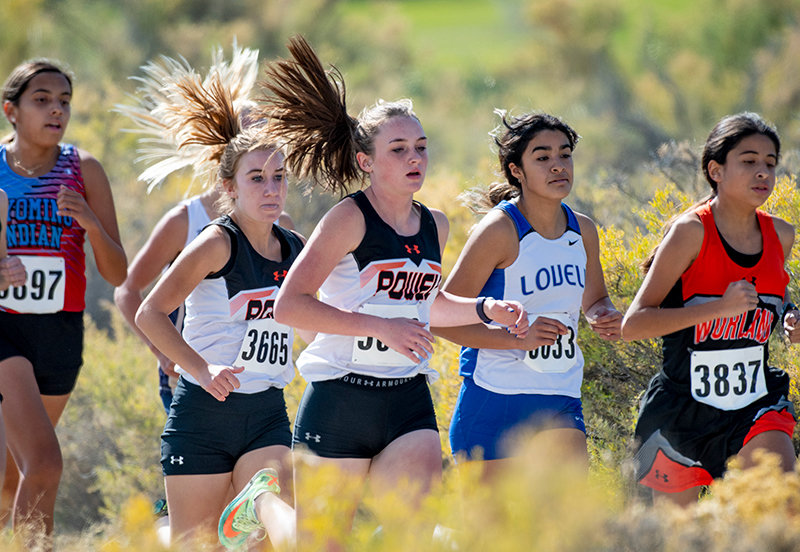 Coming into the Pinnacle Bank/Powell Invite, members of the Panther cross country team were looking to run their best times of the year, trying to do their best for the home crowd before the postseason. Many hit that goal on the Powell Golf Club course.

The Powell High School girls’ varsity team took second place behind Cody, while the boys came in third, just past Cody and 24 points behind Lander.

Panther Daniel Merritt came through with a personal record (PR) time of 17:04 to place third on Friday.

“He ran a very aggressive race and beat several runners that he had not beaten all season,” PHS head coach Ashley Hildebrand said.

Hildebrand said their goal was to break into the 18 minute mark this week, and to have both of them do it “was an awesome thing to watch.”

Riley Schiller was the fourth runner across the line for the Panthers. Schiller was battling a side ache throughout the race but finished only 26 seconds off his PR, Hildebrand said. Schiller posted a time of 18:49 — just behind Streeter in 30th place.

Two more Panthers hit PRs on the boys’ side, as Liam Taylor and Kyle North ran their best races of the season.

“Both had previously ran times in the 20s and both broke into the 19s this week,” Hildebrand said.

Justin Hobbs battled against illness and came in 48th with a time of 21:00.

On senior day, senior Kabrie Cannon led the PHS girls team, as she finished in eighth place overall and tied her season best time of 21:07.

Jordan Black continued to improve and came in ninth, finishing with a PR of 21:16.

“She is really figuring out how to race and has consistently gotten better with each race,” Hildebrand said of Black.

Kinley Cooley is slowly returning from an illness, and came in 13th with a time of 21:34.

Brynn Hillman came in just behind her PR with a time of 21:58, taking 18th overall.

Running fifth for the Panthers was Gabby Thomas who ran a PR of 22:37 and claimed 22nd.

Salem Brown continued her growth during her freshman year as she finished with a PR time of 23:17 and took 30th.

Only two girls were entered into the junior varsity girls race, with Gracie Wolff running a 26:09 coming in 13th, and Liz Peterson coming in 19th with a time of 29:38.

“Both girls had been out for several days and I am really proud of how well they competed, as Gracie had been sick and Liz has been fighting injury,” Hildebrand said.

For the junior varsity boys, Colton Decker placed 15th and ran a PR of 20:30; Hildebrand said that will put him back on the varsity team for the conference meet this week.

The PHS team heads to the conference meet on Thursday in Riverton.

Competing in Riverton will not be new for the Panthers, as they already participated in a dual at the course earlier in the season. However, it’s likely to be a different race this time around.

During the earlier event in Riverton, the PHS team battled temperatures in the upper 90s, but this time, highs are only expected to reach the upper 30s.

Hildebrand said she is excited with where the team is at for this point in the year, and expects her athletes to run well at conference against some teams they have not seen yet.

This will be the team’s second-to-last race of the year, with the state meet set for Oct. 23. The team will try to continue their recent trend of PRs in Riverton as they attempt to head to state on a high note.