Updated: Fair leaders consider which events to keep and ditch in 2022

The Park County Fair’s marquee events were a mixed bag of hits and misses in 2021, including the headlining concert.

The lesser-known Sam Cox Band of Tahlequah, Oklahoma, landed the gig by …

Updated: Fair leaders consider which events to keep and ditch in 2022 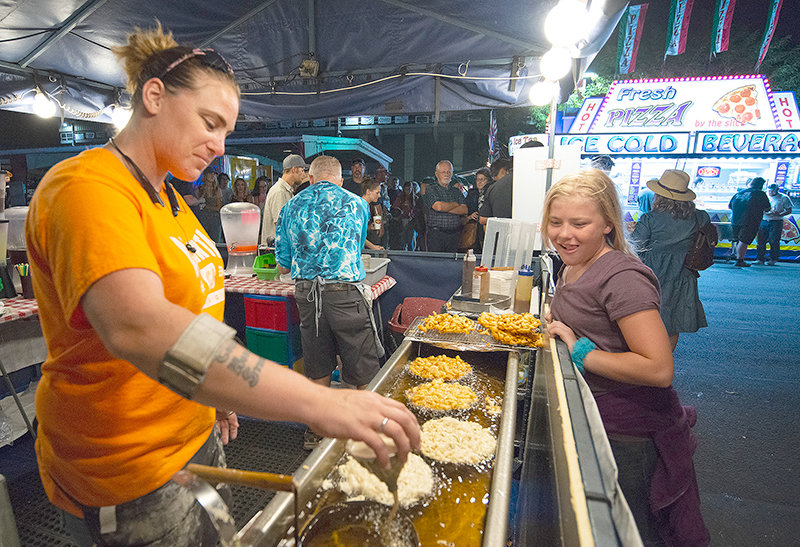 Tessa Bechtold, of Cheyenne, makes funnel cakes while her daughter, Abby, watches on. The 2021 Park County Fair was reportedly a strong one for vendors, with the carnival seeing particularly long lines. Three of the grandstand events also drew big crowds, while the other two events had smaller audiences.
Tribune photo by Mark Davis
Posted Thursday, September 2, 2021 8:25 am
By CJ Baker

The Park County Fair’s marquee events were a mixed bag of hits and misses in 2021, including the headlining concert.

The lesser-known Sam Cox Band of Tahlequah, Oklahoma, landed the gig by cold-calling the fair office and offering an extremely affordable $1,500 rate plus lodging. The fair wound up selling only about 220 tickets for the concert, which was apparently enough to generate a small profit for the county, but was a fraction of the usual crowd. Plus, some of those in attendance complained about the crude antics of the band’s drummer.

Park County Buildings and Grounds Superintendent Mike Garza said the headliner of the 2017 fair also made an unprompted offer to perform in Powell, but he noted that act was the famed country band Lonestar, which happened to be traveling through the area. In the case of “Joe Blow’s Blues from Podunk, Wherever, I think we need to do a little more vetting,” Garza said.

The fair typically features a bigger name and board members wondered if Wyoming’s own Chancey Williams — who helped draw some 1,270 attendees two years ago — might be willing to return in 2022. However, the fair’s budget remains unknown. There was some discussion about whether something other than a concert should fill that time slot in the grandstands, but Garza said he thinks concerts generally go over “very well.”

Some events succeeded, others floundered

Financially speaking, the worst grandstand event of the 2021 fair was an American Ninja Warriors-styled event, put on by Ninja Nation. Thanks to some last-minute recruiting by Brando and others, 68 people participated in the Yellowstone Motors Challenge, but only about 225 tickets were sold to spectators. With Ninja Nation charging $11,000 for its services, the county lost around $8,500, Garza said.

Pig mud wrestling featured free admission, so the county ate the $3,100 cost of putting on the event, but it again proved popular, with attendees filling up most of the bleachers.

Meanwhile, the ever-popular demolition derby sold out — selling 1,872 tickets — and the Race 4 Recovery motocross drew around 1,150 spectators (and raised $12,000 for a local teacher battling breast cancer). Thanks to the two motorsports, the county netted upwards of $10,000 from the marquee events in the grandstands, according to data provided by Garza.

“I know our concert didn’t do well this year, but our other grandstand events did,” he told the board.

Assuming that the Ninja Nation event does not return, the board will need to come up with at least one additional grandstand event in 2022; one idea thrown out was to bring back a Park County talent show.

Fair leaders definitely intend to bring back Carnival Midway Attractions. The group wound up doing a record $201,000 worth of sales on the grounds — a new record — with the county selling additional tickets.

“They had lines — lines and lines,” Brando said of the bustling midway.

It ultimately cost the county around $13,000 to bring Carnival Midway Attractions’ rides and games to Powell, Garza said.

“It was always explained to me that the carnival pays us to be here. That is not accurate,” he said, but “I still think it’s a smoking deal, especially on the management of that carnival — it’s top notch.”

The 2021 fair was not without hiccups.

Garza was thrown into a more prominent role after he fired the fair’s primary organizer in mid-June, creating what he described as a “sink or swim” situation.

“I think I did a little of both sometimes,” he said.

Commissioner Scott Mangold said Garza “had to do a lot of stuff that he’s not really trained to do.”

“I think a lot of the things that people have commented on, or sort of behind-the-scenes problems, we can address those during this offseason,” Mangold said. He suggested that hiring a new events administrator will help alleviate at least some of the problems.

New ticketing software — which isn’t designed for fairs — also proved a bit bumpy. For instance, TicketSpice’s interface wound up charging 3.2% sales tax, which is 0.8% less than it was supposed to.

“Change was a big issue the first two days and then we went to just a flat-rate sale,” Garza said, with the county not charging any sales tax. “And we were just like, we’re going to have to eat some of the tax.”

Additionally, after the office missed a sales tax payment for the month of June, the county is expecting a penalty from the state.

The board has also heard complaints about the fair book only being made available online (instead of being printed) and that superintendents should get more of a chance to review proposed changes to the book.

Several possible revisions were discussed at last month’s meeting, including the potential of tightening up the rules for how animals are treated and handled.

Board member Christy Muecke expressed dismay about how a youth treated a pig at the market show. Muecke said the animal was whipped to the point that its face was bloodied and its eyes swelled shut.

“I was just sick that that is happening on our grounds,” Muecke said, adding later, “That pig couldn’t see where it was going. It was appalling, but it was a grand champion pig.”

Muecke said she didn’t think it was her place to jump into the middle of the show and intervene, but Commissioner Dossie Overfield — who said the description sounded like inhumane treatment — said the board member had “every right” to step in.

Noting that commissioners have received complaints from animal rights advocates about pig mud wrestling, Mangold said that animal abuse is “something that we have to keep an eye on.”

“We have to be careful,” agreed Overfield.

However, after this article was published, multiple people who watched the show or saw the pig disputed Muecke's account.

“That’s not how it went down, because I would have intervened myself,” said Toni Perrine, the youth swine show superintendent, adding, “I can tell you that the pig wasn't [beaten] and it wasn't bleeding out of its eyes … its eyes weren't swollen shut or none of that.”

The youth's FFA adviser also said that neither he nor other spectators he's spoken with saw what Muecke described. Rather, he and Perrine said the animal was suffering from health problems that caused it to bruise extremely easily.

“There was obviously something wrong with it,” Perrine said.

The pig was "clean" when it came into the show ring, but it soon began turning a purplish color, said the FFA adviser, who asked that his name be withheld to help protect the identity of the youth.

“It had all of us onlookers that knew what we were looking at talking to each other, like, what’s going on with this thing?" the adviser said.  "Because he [the youth] clearly wasn’t beating it right then and there, and didn’t prior to that.”

The pig developed serious respiratory issues shortly after the show. Dr. Megan Gisonda of Powell Veterinary Services was summoned to the fairgrounds, but efforts to save the pig's life were unsuccessful and the animal died.

In a postmortem examination, Gisonda said she found “gross irregularities to the heart muscle and the tricuspid valve” and “suspected a problem with the heart, possibly due to the stress the pig was in earlier in the evening.”

Conclusively determining the cause of death would have required sending tissues samples to a laboratory, which the family declined, but Gisonda said the presumptive cause “was overheating and possible heart issues.”

“Based on gross examination alone, I cannot definitively say that this is the certain cause of death, but it is most likely the cause based on my own as well as my colleague’s professional experiences,” she wrote in a Sept. 7 statement.

Gisonda added that the animal was “in excellent body condition and clean.”

“There was no evidence of lacerations or wounds to the pig’s body,” she wrote.

Both Perrine and the FFA adviser defended the youth, saying the teen is a hard worker who takes care of his animals.

During its Aug. 10 meeting, the fair advisory board also discussed the possibility of explicitly giving judges the power to dismiss youth who are unable to control their animals during a show.

“I almost think if your calf gets away six times, you’re done,” said board member Sara Skalsky. She referenced a specific incident in which a steer repeatedly got away from its handler, causing several other children to lose control of their animals in the ensuing “train wreck.”

Other rule changes are possible as well. For instance, longtime superintendent Joyce Ostrom suggested pushing back the deadline for fair entries to encourage more people to participate.

Kelly Emery said she sought input from fairgoers about how to improve the fair and how to drive more youth participation, saying she’s heard “there’s nothing to do.” Emery suggested finding ways to get more youth involved with the fair’s livestock.

(Editor's note: This version corrects the show in  which the pig was featured and has been updated with additional information about the circumstances surrounding the animal's showing and death. It has also been updated to include statements from the veterinarian.)