Just over 100 eager students make up the graduating class of 2022. They will receive their diplomas on Sunday. 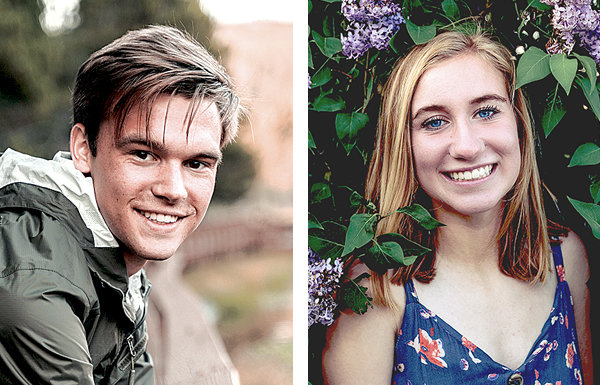 Jace Bohlman and Kabrie Cannon
Posted Thursday, May 19, 2022 8:20 am
By Braden Schiller

Just over 100 eager students make up the graduating class of 2022. They will receive their diplomas on Sunday.

The Shoshone Learning Center (SLC) graduation will take place at noon in the Powell High School Auditorium, followed by the PHS graduation ceremony at 2 p.m in the gymnasium.

The SLC will see off 14 students. Four are students at Park 1 Virtual Academy, which falls under the umbrella of the SLC.

“They’ve been a great group. You know, sometimes you have a certain group of kids that come together and they do so but they’re not wanting to play games or do things or do the community-building type activities. This group has been much more prone to want to come together and do some activities and things of this nature,” SLC Principal Steve Lensegrav said.

The SLC graduation will take place in the Powell High School Auditorium, while the PHS graduation ceremony will be in the gymnasium.

At PHS 111 students will begin the next chapter of their life beginning at 2 p.m.

“I’ve known this class for a long time, several of the students at least, and there’s a lot of great leaders in this class,” Powell High School Principal Tim Wormald said.

Powell’s seniors have gathered many scholarships and accolades this year including three trustee’s scholarship recipients and three Daniels Fund recipients.

This year’s graduating class holds an average GPA of 3.285 and has collectively earned 1,455 college credits through Northwest College.

The seniors will be represented by Valedictorian Jace Bohlman and Salutatorian Kabrie Cannon.

Jace Bohlman and Madison Harvey received the Balfour Award, which is chosen by PHS staff based on scholarship, loyalty and achievement. It is the highest award presented by Powell High School.

“There are a lot of students that have accomplished some really amazing things at the senior celebration last night,” Wormald said. “To hear what scholarships they earned and to hear what they were doing in their classes while they were here is pretty amazing.”