During a Tuesday discussion in Cody, Park County School District No. 6 Board of Trustees Vice Chair Jenni Rosencranse asked if the district even knows how many employees have concealed carry permits, and whether they would be willing to carry at … 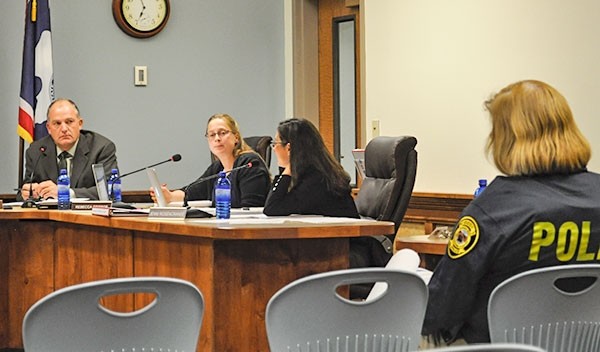 Before figuring out whether to allow school staff to have concealed weapons on campus, the Cody school board wants to find out if anyone would sign up.

During a Tuesday discussion in Cody, Park County School District No. 6 Board of Trustees Vice Chair Jenni Rosencranse asked if the district even knows how many employees have concealed carry permits, and whether they would be willing to carry at school.

“I think we could spend tons of time on this subject — tons — and not know the answers to those questions,” Rosencranse said.

The Cody school board devoted more than an hour to the topic Tuesday night, discussing a 28-page guidance manual from the Wyoming Department of Education that explores the School Safety and Security Act. The Wyoming Legislature passed the bill earlier this year, clearing the way for local school boards to allow employees to carry guns under certain conditions.

The Department of Education released its guidance manual earlier this week. While the possibility of a concealed carry policy is being discussed in Cody and Meeteetse school districts, Park County School District No. 1 in Powell doesn’t plan to pursue one at this time.

“We decided we will address the issue if and when we get a request from an employee desiring to carry a gun in school,” Greg Borcher, Powell school board chairman, said Wednesday. “Then we will work with Tracy Copenhaver, who is our attorney, the Powell police chief and the Park County sheriff to arrive at a policy that is best for our students and their safety.”

On Tuesday, Cody school board trustees decided to put out a survey to their district employees about the new gun law.

“There is no question that there’s people who are willing to step up and do it,” said trustee Scott Weber, who said the district needs to move forward with a policy.

Fellow trustee Tom Keegan asked what Cody will be teaching kids about guns if the district develops a concealed carry policy.

“If we put a sign on the wall that says, ‘Concealed weapons present,’ is that going to keep people away? Well, it might, but what’s it say to our kids, too?” Keegan said. “That we’re solving these problems like what happened in Las Vegas or wherever by us carrying guns? I think that’s a difficult one, and I’d be interested in hearing what our staff has to say about that.”

Cody school district superintendent Ray Schulte said employees will want to know details about the policy — such as whether a psychological evaluation will be required or if employees have to pay for training themselves.

“I think until they know that, I’m not sure if they can answer the survey,” Schulte said.

But when it comes to details of a potential policy — such as a psychological evaluation — Cody trustees appeared to disagree Tuesday night.

“Why would you psych eval a teacher? You would never need to do that,” Weber said.

When some in the audience reacted, Weber responded, “You think teachers are psychos? I don’t.”

Trustee William Struemke added, “Which teachers need it? I hear laughing. See me afterwards if you think there’s a teacher that needs [one] … I’d like to know about them.”

“I assure you there are no teachers that we employ that need a psych evaluation,” Weber said.

Board chair Kelly Simone said that personally, she’s interested in a mental health evaluation for employees who apply to carry concealed weapons in schools.

Trustees also discussed the financial costs of adopting a policy to arm employees.

Rosencranse said she’s “very concerned” about what workers’ compensation and insurance costs look like. She said she’d like to get answers up front to see if it’s a policy the district is going to be able to implement and sustain.

The question of who would pay for training and the firearms also came up.

Weber, who owns a firearms store in downtown Cody, said there are trainers willing to provide free instruction for school employees.

He also said school employees could carry their own firearm, rather than a district-issued gun. Weber served on the state committee that helped draft the Department of Education’s guide on school safety and security.

During the committee’s discussions, “it was suggested that applicants would have their own firearm for a variety of reasons — they’re used to it, maybe they’ve shot thousands of rounds through it,” Weber said. “And then they bear that cost — it’s their gun.”

Weber said the gun would be maintained according to standards given to the trainers.

The guns that employees carry would have to be authorized, Struemke said.

“I don’t think there’s anything wrong with telling people, here are your choices, these are the authorized firearms, these are the authorized calibers, and should you decide to be a part of this, this is what you’re going to comply with,” Struemke said. “And if they’re not cool with that, they really feel they need to run down and get the biggest shotgun, it’s their concealed carry, they’ll shove it down their pant leg and they’ll show you, then [they] don’t need to be a part of it.”

Trustee Bell asked whether it would be acceptable to insurance companies if school employees carried personal firearms, and if that would increase the district’s liabilities.

Before adopting a policy on concealed carry for staff, Cody trustees have questions for local law enforcement, their attorneys and the district.

“Some of it might be determining, based on our answers, if people are comfortable with even proceeding with policy,” Simone said.

The school board also is planning to get public input. At Tuesday’s work session, the board did not ask for comments from those in attendance, but Simone said there would be “ample opportunity” for public comment in the future. Rosencranse also suggested surveying parents in the district.

Trustee Rebecca George said she also wants to know what school security measures are already in place in Cody schools.

“Have we looked at doing active shooter trainings in our schools? Have we looked at using non-lethal weapons in our schools? I mean, what have we actually looked at?” George asked. “We’re talking about going from, I don’t know, maybe minimal to arming our teachers. Is there anything in the middle that we have done? I think we need to address that, and I know our public has asked us to do so.”