Organization blames Gunwerks for any problems

With the help of a $6 million loan and grant package from the State of Wyoming, a Cody gunmaker moved into new and expanded headquarters in 2020. But Gunwerks now says there were “systemic and …

Organization blames Gunwerks for any problems 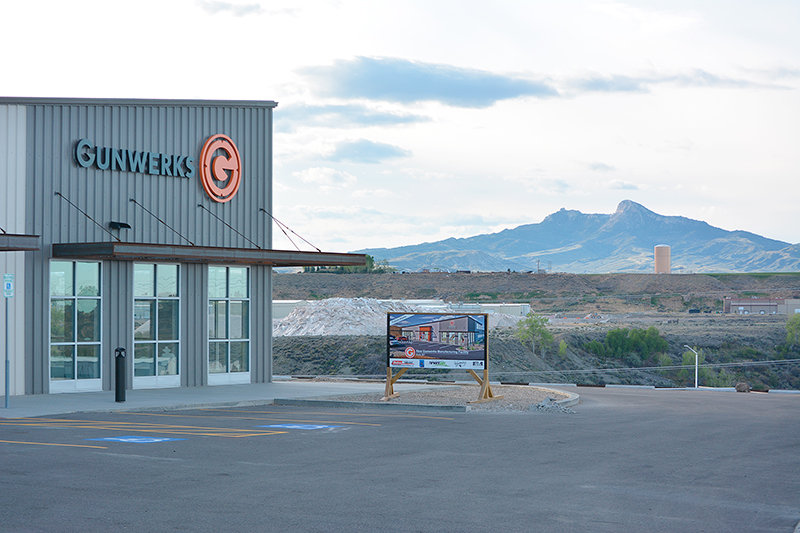 Gunwerks’ current headquarters — pictured shortly before construction was finalized in May 2020 — were built with the help of $6 million worth of state aid. The company contends there are multiple problems with the building and is suing Forward Cody, which oversaw the project and owns the facility.
Tribune file photo by CJ Baker
Posted Thursday, March 10, 2022 8:25 am
By CJ Baker

With the help of a $6 million loan and grant package from the State of Wyoming, a Cody gunmaker moved into new and expanded headquarters in 2020. But Gunwerks now says there were “systemic and material problems” with the 42,800 square foot facility in Cody.

In a pending lawsuit, Gunwerks contends the project “was riddled with defects and errors that materially de-valued the building and impacted the efficiency and effectiveness of Gunwerks’ operations.”

The company is suing general contractor Sletten Construction, designer Plan One/Architects and the nonprofit economic development group Forward Cody, which oversaw the project and leases the building to Gunwerks.

Both Plan One and Sletten have asked for the claims against them to be dismissed, contending that their contracts with Forward Cody specifically prohibited claims by third parties like Gunwerks.

Meanwhile, Forward Cody denied the allegations and filed counterclaims against Gunwerks and its CEO Aaron Davidson last week. The nonprofit organization alleges that any defect or deficiencies in the building should be attributed to the gun manufacturer.

“Gunwerks intentionally and improperly interfered with [Forward Cody’s] and Plan One’s contractual relationship by taking control of and directing the design process” and made changes shortly before the project was supposed to be complete, Forward Cody attorneys Kevin Kessner and Bradley Thimmesch of Sheridan asserted in a Feb. 28 filing. They say the premises were “constructed in accordance with the approved architectural plans and designs that were approved by Gunwerks and/or Davidson.”

Forward Cody also says Gunwerks has failed to make full payments on its lease and paid late “on numerous occasions.”

In a Wednesday email, Davidson said that since moving into the building, his company has “followed the express written instructions from both Forward Cody’s legal counsel, and its President James Klessens regarding the exact amount of the lease payment that we make on time, every month.”

“We can only hope that these claims weren’t made maliciously to smear Gunwerks’ reputation and that it was simply an oversight on its part,” he said.

Through the process and lease, Davidson said his company has “demonstrated an acute attention to detail, and an intention to yield the best possible building and economic benefit to the community of Cody.”

Forward Cody and Gunwerks are each seeking an unspecified amount of damages for their claims against one another; Gunwerks says more than $3 million is in dispute. According to Forward Cody’s filing, the company has asked for additional improvements to the Blackburn Street property, including a new storage building and additional concrete, HVAC, heating, grading and landscaping work.

Gunwerks has also purchased a bigger building on Cody’s West Strip. In November, the same month it filed suit, Gunwerks struck a $2.2 million deal to buy the 74,754 square foot facility that formerly housed Cody Laboratories; the transaction was finalized in January. Davidson — who has also been developing a Dairy Queen in Powell — recently told the Cody Enterprise that the company plans to use the space for an entirely new manufacturing division. He said Gunwerks is not planning to move out of its Forward Cody-owned building on Blackburn Street, though he said “the possibility certainly is there.”

The Wyoming Business Council awarded a $3 million grant and a $3 million loan for the new headquarters in 2018 to help Gunwerks expand in Cody. As explained in Business Council materials at the time, Gunwerks was experiencing increasing demand for its products and it needed a larger building to vertically integrate and manufacture the components used in its rifles.

Gunwerks contributed the 5-acre parcel of land for the project and will have the option of buying the building after five years of leasing.

“As much as we hated the commitment of creating this facility and making the spend, we knew that to get that next machine or to hire that next engineer we needed more space,” Davidson explained in a promotional video published in November, “and so it pushed us to invest the time and the energy and all the effort to create this new facility.”

The company pledged to retain 58 positions and add 52 more by 2025 — increasing its payroll by more than $3 million — while buying another $5 million worth of equipment.

Located north of Big Horn Cinemas, the facility is centered around a large shooting range, where the company can test its long range shooting systems.

In the video posted to YouTube on Nov. 22, Davidson highlighted the facility and the “massive undertaking” to make the building a reality.

“The investment and time was significant, and I think it took a couple years off the back end of my life to make this happen, but this facility will help us bring better value to our customer,” Davidson said in the video. He said the new building included enough space to grow, add processes and integrate for a few years.

“This facility, to me, in a lot of ways represents that relentless drive that we have to improve and change and to bring it in the industry,” Davidson said.

The same day Gunwerks published the video to its YouTube channel, the company’s attorneys with Crowley Fleck in Casper filed the lawsuit against Forward Cody in Park County’s District Court.

The suit alleges that the building — which broke ground in 2018 and was completed in the summer of 2020 — has defects in the concrete flooring and sidewalks, in the finishes, in the installation of the heating, venting and air conditioning systems, in the metal siding, the site drainage, the door and window flashing, the ceiling heights, and the construction and design of the shooting tunnel.

“Rather than meeting the contracted standards of construction, the project requires substantial repair and replacement work in order to meet the obligations of the agreement,” Gunwerks attorneys Tim Stubson and Holly Tysse of Casper wrote in an amended complaint filed in January.

The company charges that Forward Cody unilaterally approved change orders that drove up the cost of the project, saying a number of them were associated with fixing “defective work performed by Sletten Construction or errors of the project design team.” Gunwerks charges that Sletten and Plan One failed to meet their contractual obligations and that Forward Cody failed to adequately supervise the job, also faulting the organization for not seeking damages from Sletten when the project was late.

However, in its answer and counterclaim, Forward Cody places the blame for any problems and the delays on Gunwerks.

They charge that Gunwerks “knowingly had an unqualified representative on the construction site” who “intentionally interfered with the scheduled progress of the project.” (Davidson said they proved their ability “to understand and process the technical documentation of the construction project.”) By making changes to the design up through January 2020, Gunwerks made it “impossible” to hit the Feb. 29, 2020 completion date, Forward Cody says.

The Gunwerks headquarters was ultimately certified for occupancy in June 2020.

According to the terms of the company’s lease, Gunwerks is supposed to pay Forward Cody $12,868 per month, or $154,416 per year for the use of the property. But according to Forward Cody’s filing, Gunwerks has generally been paying only $11,099 a month, which would suggest the company owes around $35,000. Although Forward Cody has accepted the reduced payments, the organization says it “has not waived their right to collect the rent owed and claim breach of the lease.” Davidson disputes the allegations.

Forward Cody has also filed crossclaims against Sletten and Plan One, saying that, if Gunwerks can demonstrate the contractors performed defective or substandard work, the contractors should be held responsible for any damages.

Gunwerks will file a response to Forward Cody’s counterclaims and Sletten and Plan One’s requests for dismissal in the coming weeks. A trial date has not yet been scheduled.