The recognitions and awards continue to pile up for Toran Graham.

Adding to achievements already earned during his high school career, Graham joins an elite club after being named to the National … 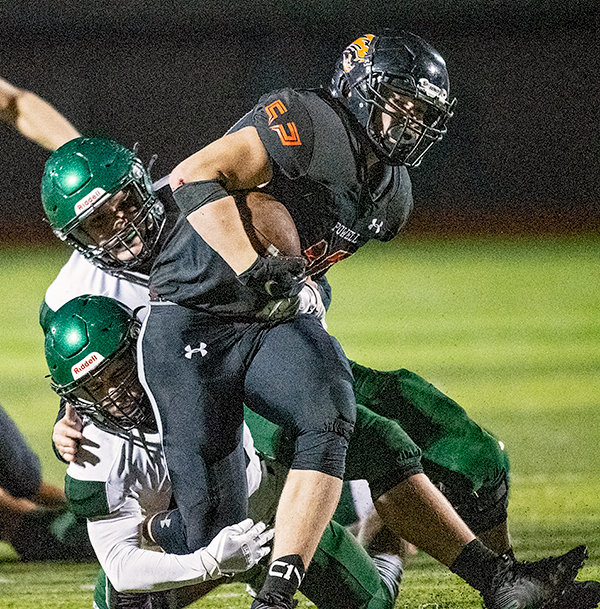 Toran Graham drags Green River defenders as he carries the ball during a game in October. Graham was recently named to the NFF’s Team of Distinction.
Tribune photo by Carla Wensky
Posted Thursday, June 30, 2022 8:20 am

The recognitions and awards continue to pile up for Toran Graham.

Adding to achievements already earned during his high school career, Graham joins an elite club after being named to the National Football Foundation’s (NFF) Team of Distinction.

This is the fifth edition of the Team of Distinction, which started back in 2018 in an effort to honor the top high school scholar-athletes from around the country.

So far 381 athletes from around the country have been inducted over the five-year period, and the class of 2022 features 82 honorees out of a pool of 3,500 students.

Graham was the lone selectee from Wyoming to this year’s team. In addition to boasting a 4.03 GPA, he was named two-time team captain, 3A State Defensive Player of the Year and served as National Honor Society (NHS) Chapter vice president.

Graham is the fifth Wyoming player selected and the first one from class 3A — joining four members from each of the previous classes.

“This initiative allows us to shine a national spotlight on some of the most deserving high school student-athletes honored at the local level by our expansive Chapter Network,” NFF Chairman Archie Manning said in a statement. “This honor is one of the most prestigious national awards that a high school player can receive. We would like to congratulate all 82 honorees for their success on and off the field, especially with the challenges caused by the pandemic during their senior year. We also want to salute all of our NFF Chapters who continue to play an important role in promoting football in their communities.”

As part of the award, the honorees will be part of a permanent digital display at the Chick-fil-A College Football Hall of Fame in Atlanta, Georgia.