Shortly after being named the country’s most popular governor among his Wyoming constituents, Mark Gordon took the stage and announced his agreement that climate change is the … 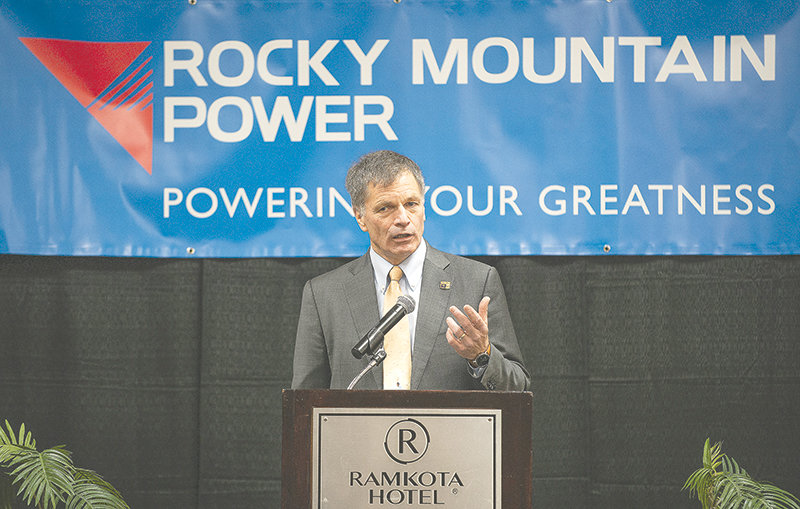 Gov. Mark Gordon told a crowd of journalists last week that he thinks the climate crisis is critical — and that Wyoming may have a solution through carbon capturing technology. The speech to the Wyoming Press Association was sponsored in part by Rocky Mountain Power.
Tribune photo by Mark Davis 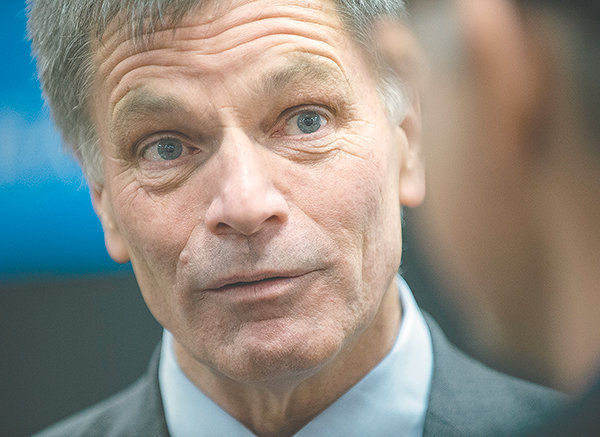 Shortly after being named the country’s most popular governor among his Wyoming constituents, Mark Gordon took the stage and announced his agreement that climate change is the “single-most important issue on earth.”

The statement puts him at odds with many national Republican party leaders — also popular in the largely conservative Cowboy State. It’s not the first time Gordon has discussed his concerns about the issue, but his statements about a climate crisis put him at odds with many GOP talking points. President Donald Trump has gone as far as to call climate change a “hoax” and warned against following “perennial prophets of doom and their predictions of the apocalypse” while addressing the World Economic Forum in Davos, Switzerland, last week.

Gordon took a different tack in front of scores of journalists at the Wyoming Press Association’s annual winter convention in Casper, though he declined to draw a contrast between his remarks and the president’s when pressed by a reporter.

“Am I going to comment on President Trump and his attitude with it? No,” Gordon said. “I’m just saying that Wyoming has an opportunity to solve this issue.”

Gordon’s goal in his speech was to highlight advancing technologies, including carbon capture, and to defend the state’s energy extraction industry.

“I’ve been very disappointed in the fact we have this expectation that fossil fuels are inherently bad and that there’s no way of bringing them back and that our only solution for climate change is to shift everything to renewables,” he said, adding, “Only through better development of technology, the kind of stuff we’ve worked on for decades here in Wyoming, can we actually start to remove carbon dioxide from the atmosphere.”

A representative of the Wyoming Outdoor Council said while he was happy Gordon acknowledged the issue, “opening the door to further conversation,” he said carbon capture technology is still years away from being perfected and might prove too expensive.

“Sending the message that carbon capture is the only solution to the crisis is inaccurate,” said Alan Rogers, the council’s communications director.

While siding with climate scientists, Gordon also came out in support of proposed changes to decades-old legislation protecting the environment and endangered species. Earlier this month Gordon sent out a release supporting efforts to “modernize” the National Environmental Policy Act (NEPA).

“Over time [NEPA] has become an obstructive law,” he said in an interview following his speech. “It was designed to inform how a project would affect the environment. Not to be a labyrinth that makes it impossible to get anything done.”

Critics of the proposed changes say changes to NEPA requirements could be the most far-reaching environmental rollback to date. The legislation was signed into law in 1970.

Gordon also sees the Endangered Species Act as being problematic and in need of change. The debate over grizzly bears has put Wyoming in the middle of taking the lead on changes to the Act.

“When we have a population that is recovered, how do we make sure that the states can weigh in on management?” Gordon asked.

“It’s a moving goalpost,” he said. “In the case of grizzlies, we have a population that, by all of the first several hurdles, was a recovered population. Now it’s time for us to be able to allow hunts and provide the opportunity for people in this state.”

Gordon also spoke to other issues, including responding to a question about the state’s efforts to stem suicide rates by referring to naturalist John Muir.

“I believe strongly in the solace of open spaces. John Muir would talk about getting to the mountains and find yourself again. And we have that opportunity in a way that no one else does,” he said. “Now, that isn’t a cure. It’s not a solution. It’s not anything else. It’s just that’s a resource that we have. And I think it can be helpful to some degree.”

Gordon has called on the Legislature to provide $400,000 a year for a suicide prevention hotline, but said “there will never be enough resources” to deal with mental health issues in the state. Last year Wyoming ranked as the fourth highest in the country with a suicide rate of 19.3 per 100,000 citizens.

He also responded to questions and complaints from a University of Wyoming student journalist in the audience who said her peers have lost trust in the university’s appointed trustees.

“I have tried to meet as often as I possibly can with student senate and with the faculty and with the trustees and to try to get us back on a course where we’re really talking about the institution as a place that students want to go and be,” Gordon said. “When we spend all our time trying to figure out how to build buildings and not to make sure that we’re filling that with fantastic programs, then we have a problem.”

As for the governor’s popularity — which came from a quarterly Morning Consult survey showing 69% of Wyoming residents favor his leadership, while only 11% disapprove — Gordon said he feels awkward about the notoriety that comes with being the top-ranked state leader.

“There’s only one other direction to go,” he quipped.