The higher cost of fuel, new vehicles and repairs has forced the Wyoming Game and Fish Department to increase its budgetary spending by $2 million for the 2022-23 fiscal budgets. 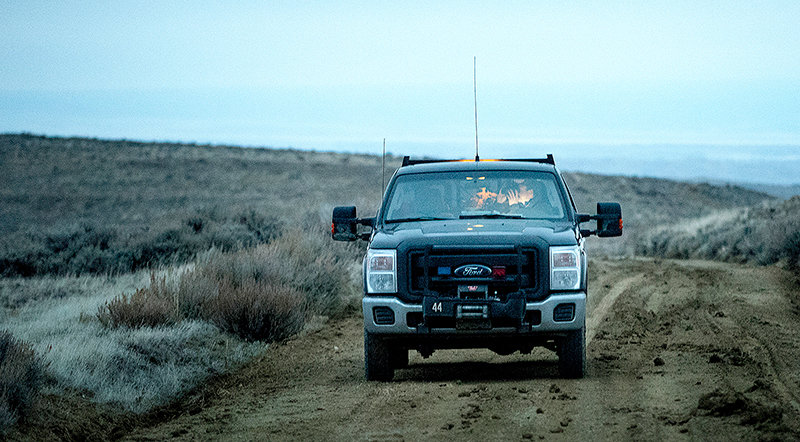 Former Powell-area Wyoming Game and Fish Department game warden Chris Queen looks for sage grouse in his company truck on rutted roads in Elk Basin. Game wardens are notoriously tough on trucks as they cover thousands of miles a year on backcountry ‘roads’ while on the job.
Tribune photo by Mark Davis
Posted Thursday, August 11, 2022 8:20 am
By Mark Davis

The higher cost of fuel, new vehicles and repairs has forced the Wyoming Game and Fish Department to increase its budgetary spending by $2 million for the 2022-23 fiscal budgets.

Paying the bill, which the commission approved in its July meeting, isn’t the only pain involved in the process.

The time it takes to purchase new vehicles has gone from an average of 120 days prior to recent supply issues to between 300-550 days. That means repair costs have also gone up significantly as the department, which doesn’t have extra vehicles on standby, pushes its current fleet well beyond the point that they usually take vehicles out of the rotation, said Jennifer Charley, vehicle purchasing coordinator for the department.

“They have very rough mileage on them. And we try to not have spare vehicles in our fleet. We’ve basically tried to minimize that, so when a truck is out, we’ve either got employees sharing vehicles or things just aren’t getting accomplished,” she said.

It’s Charley’s job to deal with the fleet and she knows how hard they are pushed. Game wardens, who patrol vast stretches of Wyoming’s immense landscape, put the most stress on their rides. They typically drive a one-half, three-quarter or one-ton 4x4 pickup.

“We see a lot of wear and tear on tires because of the terrain that they’re in. And body damage as well, from debris and trees and all kinds of things,” she said.

The state bid out 37 new vehicles in 2022 and 57 this year. The department typically attempts to keep a vehicle in rotation for 110,000 miles or 10 years, whichever comes first. After that, costs begin to increase exponentially trying to keep them on the road.

“One of the main issues is the chip shortage, which doesn’t seem to be getting any better. And there are also material shortages as well. So I don’t think anybody thinks there’s a promising future,” she said.

Swallowing the $2 million pill is even harder considering the current gains on Wyoming state agency pool investments had been performing poorly — at a dismal rate of return as low as .125 percent.

“It has been a nightmare,” said Patrick Fleming, chief investment officer for the state treasury department.

Results may be better than most investors have seen in their stock portfolios as of late, but the state pool only invests in guaranteed earnings. However, things are looking up, he said.

U.S. Treasury Bills currently being purchased by the state now have a rate of return of 2.875 percent.

Game and Fish has recently been given the green light to invest in Pool A, a higher risk account with the potential for much higher returns. The department has yet to fund that investment account, according to Fleming, but they have $44.2 million to invest in the higher risk pool.

“There is risk. It’s a higher risk account. But the hope over the long term is that it shows greater return than the standard investment pool, where the majority of state operating funds are invested,” said Meredith Wood, chief financial officer for the department.

Pool A investments are split across numerous asset classes including bonds, equities, bank loans and other investments. Department budgets and employee levels have remained mostly flat for the past five years, despite the increase in many necessary expenses.

“Our folks work really, really hard to be frugal with sportsman dollars. And they also have built a tremendous number of valuable relationships with other partners — [non-governmental organizations], landowners, other individuals and federal agencies as well — to help leverage support dollars for all of our commission priorities,” she said.