The number of grizzly bear conflicts continues to trend lower this year, according to state officials. But they caution those recreating outdoors this fall to be wary of bears moving into lower … 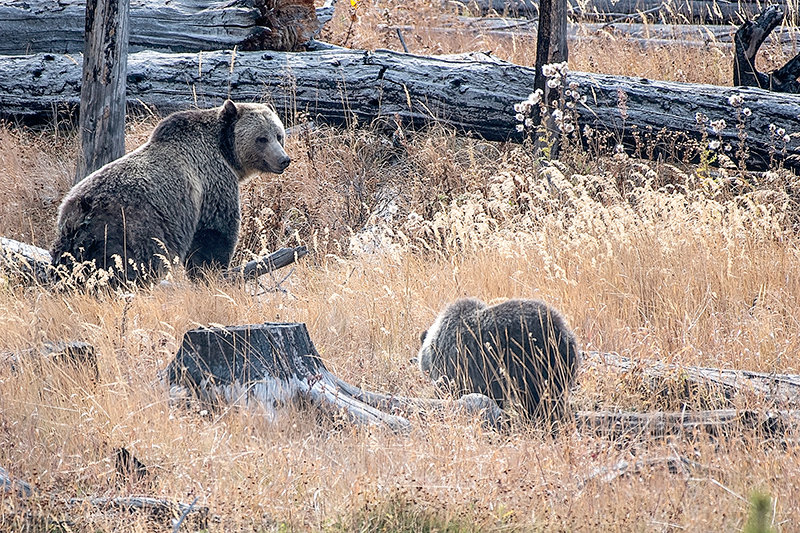 A grizzly bear sow watches over her cub while they forage at lower elevations during a recent fall season in Yellowstone National Park. The Wyoming Game and Fish Department has cautioned recreationists that bears have moved into lower elevation areas looking to fatten up for hibernation.
Tribune file photo by CJ Baker 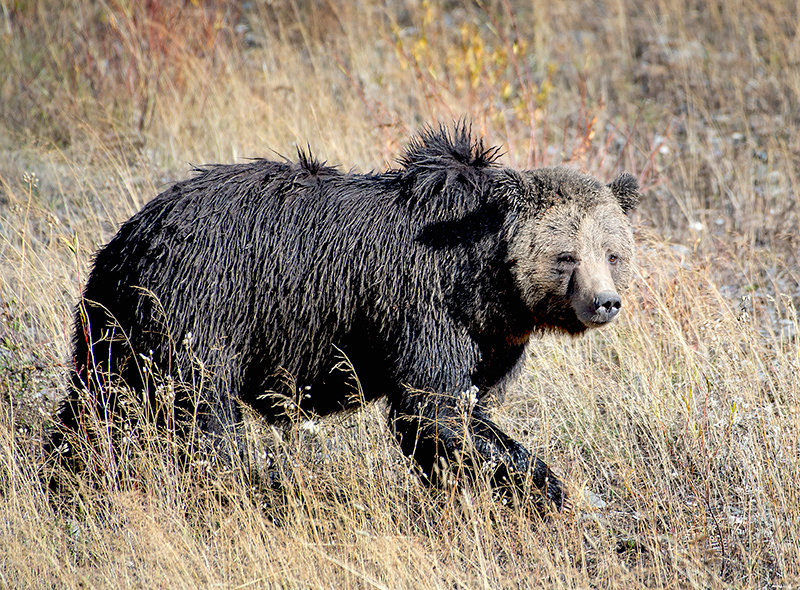 A grizzly bear having what appears to be a bad hair day patrols the bottoms at Lamar Valley in Yellowstone National Park. Grizzlies can eat 20,000 calories a day during hyperphagia. For comparison, that’s about 75 glazed doughnuts.
Tribune photo by Mark Davis
Previous Next
Posted Thursday, October 6, 2022 8:25 am
By Mark Davis

The number of grizzly bear conflicts continues to trend lower this year, according to state officials. But they caution those recreating outdoors this fall to be wary of bears moving into lower altitudes while trying to fatten up prior to hibernation.

Preliminary data from the U.S. Geological Survey shows a total of 35 known grizzly bear mortalities so far this year in the Greater Yellowstone Ecosystem.

The majority of known grizzly mortalities in the three-state area have happened in Wyoming; seven were euthanized in management decisions, three died of natural or undetermined causes and 10 are still listed as under investigation for a total of 20.

It’s currently a 38% drop in management removals compared to 2021 and a 75% drop from 2018, when 32 bears were removed from Wyoming habitat by officials. While state officials are tasked with removing bears in conflict (typically through euthanization), the U.S. Fish and Wildlife Service is responsible for making the call.

Despite the positive trend, wildlife managers received criticism for a high profile removal in July when the department was forced to euthanize grizzly bear 1057, one of the four famous cubs of the world’s most famous grizzly sow; grizzly bear 399. The management decision was made due to the two-year-old aggressively seeking food rewards from humans.

After repeated conflicts in residential areas of Kendall Valley in the Upper Green River area and displaying increasingly bold behavior, the two-year-old grizzly cub was trapped and euthanized in July. It was going “house to house” looking for food, Dan Thompson, large carnivore section supervisor for the Wyoming Game and Fish Department, told Wyofile in August.

Grizzly 399 and her cubs were known to have received food rewards from some residents in the Jackson area, which is bad news for bears, said Thompson.

“It’s more of a question if a bear becomes food conditioned,” he said. “Once they have reached that level, if caught it will likely be lethally removed. This is why we try to deter bears obtaining those foods attributed direct to people and work to secure attractants proactively.”

Despite the bear’s apparent lack of fear of humans, the decision to kill grizzly 1057 sparked outrage. Social media posts accused the department of hastily killing the bear instead of relocating it to a new habitat, urging readers to contact officials in protest.

Game and Fish officials will not relocate bears that are considered a threat to human safety. Once a bear is captured, all circumstances are taken into account when determining if the individual should be relocated, the department said.

If relocation is warranted, a site is determined by considering the age, sex, and type of conflict the bear was involved in as well as potential human activity nearby. Grizzly bears are only relocated into areas already occupied by other grizzly bears.

“With any relocation, Game and Fish consults with appropriate agencies to minimize the chance of future conflicts and maximize the relocated grizzly bear’s survival,” the department said in a recent press release.

Management responses “depend on the severity of conflicts and amount [or] type of food rewards,” Thompson said.

Game and Fish biologists verified having fewer agency removals and relocations this year. Many factors contribute to lower conflict numbers, especially with the overall availability and abundance of natural foods, Thompson said.

The department has installed “a lot of electric fencing in the past several years that has removed some conflict potential and continued foundational outreach and education coupled with reactive management have been contributing factors to recent successes,” he said in the Tuesday interview.

“All of this is another testament to the public cooperation that recovered grizzly bears years ago,” he said.

This is a busy season for Game and Fish large carnivore biologists. They currently have several conflict situations with grizzly bears with which the team is dealing and have had reports of bears coming in on elk hunters.

“[It’s] the reality of a robust grizzly bear population that continues to expand,” Thompson said. “We have a long month ahead of us, and we thank the public for reporting any conflicts with bears so that we can respond immediately and appropriately.”

Grizzly and black bear activity is increasing at lower elevations in Park County, according to officials. They caution landowners and outdoor enthusiasts to be bear aware and take preventative action to avoid conflicts with bears.

Large carnivore biologist Luke Ellsbury said Game and Fish has recently noted an increase in bear activity on public and private lands along corridors of the South Fork and North Fork of the Shoshone River, Clarks Fork River and Greybull River.

“As fall approaches, bears become more active in search of food and take advantage of food sources and the natural pathways river corridors offer,” Ellsbury said. “While it’s not uncommon to see an increase of activity in the fall, it does serve as a good reminder to be extra vigilant and to keep in mind that bears can pop up in many unexpected places along the Absaroka front this time of year.”

Residents should remain alert and watch for evidence of bear activity such as tracks, scat and diggings and use caution while working or recreating in these areas, the department said in a recent press release. “Hikers, anglers, hunters or anyone else recreating in areas that could be occupied by bears should take precautions and carry a deterrent such as commercially available bear spray,” the release advised.

Game and Fish suggests residents avoid conflicts by securing all attractants such as garbage, pet food and livestock feed. Bears observed in or near residential areas should be immediately reported to your local Game and Fish office.

Learn more about staying safe in bear country at wgfd.wyo.gov.