As the team explores possible modifications to federal sage grouse plans, it will also consider local economic growth and job creation, according to a Thursday news release from the Department of the Interior. The team will consist of officials from … 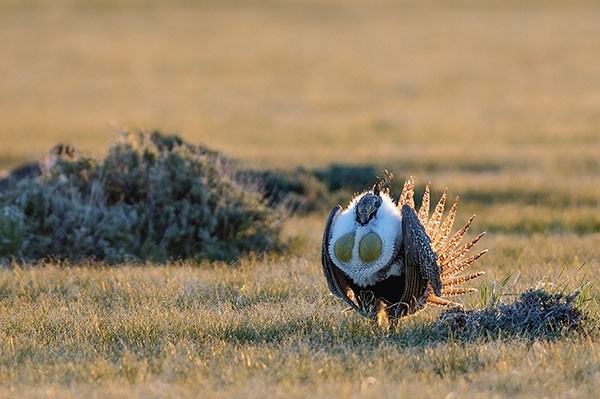 Beams of golden light at sunrise catch the feathers of a male sage grouse as it displays for females in a lek near Heart Mountain on preserved sagebrush habitat in Park County. The ground-dwelling bird is the subject of conservation regulations currently being reviewed by new Interior Secretary Ryan Zinke. Wyoming has 26 percent of the world’s sagebrush habitat and 37 percent of the total population of sage grouse.
Tribune photo by Mark Davis
Posted Tuesday, June 13, 2017 2:17 pm
By Mark Davis

Lost in a national news cycle dominated by testimony from former FBI director James Comey, Secretary of the Interior Ryan Zinke penned secretarial order 3353 — announcing the formation of an internal review team to evaluate both federal and state greater sage grouse conservation plans to “ensure they are complementary.”

As the team explores possible modifications to federal sage grouse plans, it will also consider local economic growth and job creation, according to a Thursday news release from the Department of the Interior. The team will consist of officials from the Bureau of Land Management, U.S. Fish and Wildlife Service and the U.S. Geological Service.

The former congressman from Montana said in a Wednesday conference call that, in the effort to save the imperiled greater sage grouse, he wants to be a good neighbor and partner with states and private industry.

“We want to be advocates, not adversaries,” he said.

Zinke said he spends time on the front line in conversations, talking to people concerned over heavy-handed management of private industry on public lands under the Bureau of Land Management.

“There is mistrust and anger about our actions,” he said. “Uncertainty breeds distrust. Our most important task is to restore trust that the federal government can be a good steward of public lands.”

He highlighted complaints from several Western governors — including Brian Sandoval of Nevada, Gary Herbert of Utah and Butch Otter of Idaho — that their concerns were ignored as the plan was developed. The three want a plan which relies less on habitat preservation and more on sage grouse population, Zinke said.

The secretary’s order last week resulted in protests from not only conservation organizations, but also from officials who worked on the collaborative, multi-state Obama administration-era National Greater Sage-Grouse Planning Strategy.

The protests include a letter penned by Wyoming governor Matt Mead and Colorado governor John Hickenlooper.

“We understand that you are considering changing the department’s approach to sage-grouse, moving from a habitat management model to one that sets population objectives for the states,” read the governors’ May 26 letter to Zinke. “This is not the right decision.”

Former Wyoming governor Dave Freudenthal, as well as current governor Mead, were instrumental in the collaborative effort despite the state’s dependency on the development of natural resources including oil, natural gas and coal.

Wyoming has more than 26 percent of the world’s sage grouse habitat and 37 percent of the bird’s population. Once numbering in the millions, current estimates of the population are between 200,000 to 500,000.

Tom Christiansen, sage grouse program coordinator for the Wyoming Game and Fish Department, has been studying the species for 30 years and worked on the collaboration.

“The effort was not simply to avoid listing [sage grouse as an endangered species]. It was a true conservation effort by all involved,” he said.

Christiansen has led the Game and Fish effort since 2004. But he’s also an advocate for sage grouse hunting and personally harvests sage grouse every year.

Wyoming currently offers a two-week season with a bag limit of two in most of the state; Christiansen is one of the season’s biggest proponents.

He’s also part of the state’s team that will be working to implement new Game and Fish regulations to comply with House Bill 217, passed by the 2017 Wyoming Legislature. It gives privately owned game farms the right to collect wild greater sage grouse eggs and raise chicks to release in an effort to increase population.

“The governor didn’t sign the bill,” said Holly Copeland, a geospatial ecologist and president of the Wyoming chapter of The Wildlife Society, adding, “I agree with Mead.”

The society is a national professional organization of scientists that isn’t outspoken unless they have grave concerns, according to Copeland.

“Science doesn’t support what they’re proposing,” Copeland said. “This is a habitat issue and we need to focus on habitat.”

Christiansen, despite being charged with implementing state law, doesn’t have faith in the ability to help wild populations by rearing chicks at game farms.

“Intact sagebrush habitat is important. No sagebrush, no sage grouse,” he said.

Jamie Rappaport Clark, president and CEO of Defenders of Wildlife, issued a statement after Zinke ordered the review of the federal government’s sage grouse efforts.

“Messing with these plans now will not only threaten years of collaborative conservation planning, but also communities and economies that depend on this vibrant ecosystem,” Rappaport Clark said. “In fact, a transparent, science-based review would find that we should strengthen protections for sage grouse in the federal plans.”

She said Secretary Zinke’s order could have far-reaching consequences.

There is also a list of other species dependent on sagebrush ecosystems.

“What we’re really talking about is sage grouse being a flag-bearer for a large list of species,” Christiansen said. “But we live here too. We’re trying to find a sustainable coexistence.”

“There’s the rub,” Christiansen said. “We need consistency across long periods of time.”

Zinke directed federal agencies to give him recommended changes in 60 days.

“I’m confident our plans will be successful and will not require a listing,” he said.

The meeting will be held Wednesday at 6 p.m. at the Game and Fish Office in Casper. There will also be an online meeting at noon, accessible at https://wgfd.wyo.gov/Get-Involved/Public-Meetings.

Written comments on the proposed regulations will be accepted through 5 p.m. July 25, by mailing: Wyoming Game and Fish Department, Regulations, 3030 Energy Lane, Casper, WY, 82604 or online at http://wgfd.wyo.gov. Written comments will be presented to the Game and Fish Commission prior to a public hearing at its Aug. 23 meeting in Casper.

Editor's note: This version corrects the date of the meeting.