A quick trip down south to Worland on Thursday led to some fast times for the Panther cross country team.

“Our kids had another outstanding day,” coach Ashley Hildebrand said. … 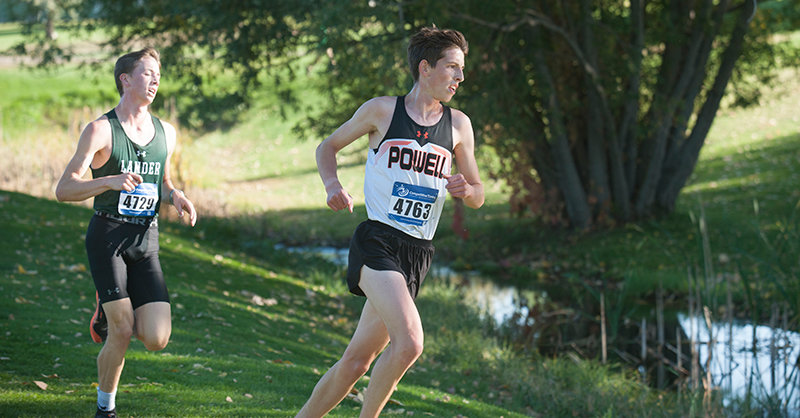 Daniel Merritt led the way for the Panthers at the Worland invite, finishing with a season-best time and just behind his all-time personal record.
Photo courtesy Alex Kuhn, Northern Wyoming Daily News 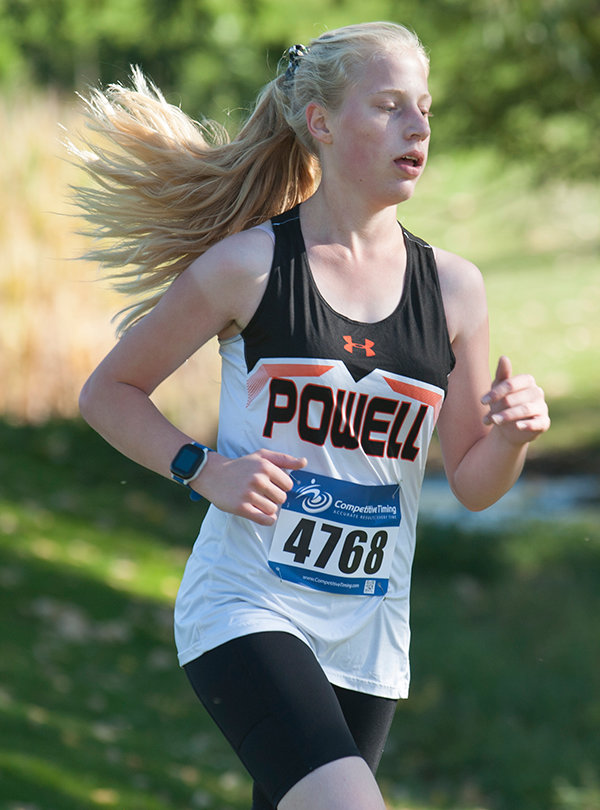 Jordan Black was the second runner for the Panthers as she came in 14th at the Worland invite with a personal best time of 21:34.
Photo courtesy Alex Kuhn, Northern Wyoming Daily News
Previous Next
Posted Tuesday, October 5, 2021 8:15 am
By Seth Romsa

A quick trip down south to Worland on Thursday led to some fast times for the Panther cross country team.

“Our kids had another outstanding day,” coach Ashley Hildebrand said. “The Worland course is one of our favorites.”

Leading the way for the Panthers was Daniel Merritt, who ran a season-best time of 17:16.61, which was just 8 seconds off of his personal best. He came in fifth place.

Behind Merritt for the Panthers was Riley Schiller, who ran a season-best time of 18:23.20 and took 31st.

In 39th and 40th places, the Panthers had Breckin Streeter and Ben Whitlock, with Streeter running a season best 19:11.05 and Whitlock running the route in 19:23.74.

Justin Hobbs was finally able to break the 20 minute mark, finishing with a season-best time of 19:59.41 and taking 43rd place.

Freshman Liam Taylor improved on his personal best by 1 second as he finished 45th with a time of 20:19.12.

The boys team finished seventh overall with a team score of 156.

Meanwhile, the girls team took fourth place with a team score of 90.

Kabrie Cannon led the way for the Panther girls, running a season best 21:07.42 and finishing in 10th.

Jordan Black was the second runner for the Panthers and 14th overall. She shaved nearly a minute off of her best time so far this season, running the course in 21:34.68.

Gabby Thomas shaved a minute-and-a-half off her top time this season, finishing 28th and breaking the 24- and 23-minute mark. She dropped her season-best time down to 22:49.67.

Kinley Cooley experienced a setback as she finished 29th, running her slowest time of the season at 22:58.65.

“Kinley was not feeling well at all,” Hildebrand said.

Salem Brown continued her improvement as she placed 32nd and cut another 15 seconds off her time, dropping it down to 23:34.01.

Gracie Wolff finished 35th and just behind her season-best time with a 25:19.11.

The Panthers will host the Pinnacle Bank/Powell Invitational on Friday at noon at the Powell Golf Club.

“Coach McArthur and I are very excited to see how our kids compete this Friday,” Hildebrand said. “Our course is one of the fastest in the state and we think our kids will be able to run some of their best times.”

The day will begin with both junior varsity races, followed by varsity races at 1 p.m. and 1:30 p.m. Awards and recognition for Powell High School’s senior athletes will follow at 2 p.m.

Following the high school recognitions, middle school races will be at 3 p.m. and 3:30 p.m., with middle school awards following at 4 p.m.