Park County closed out another successful fair week as of Sunday, with attendance being well over that of last year’s fair.

William Wood, who stepped into the role of events manager a little … 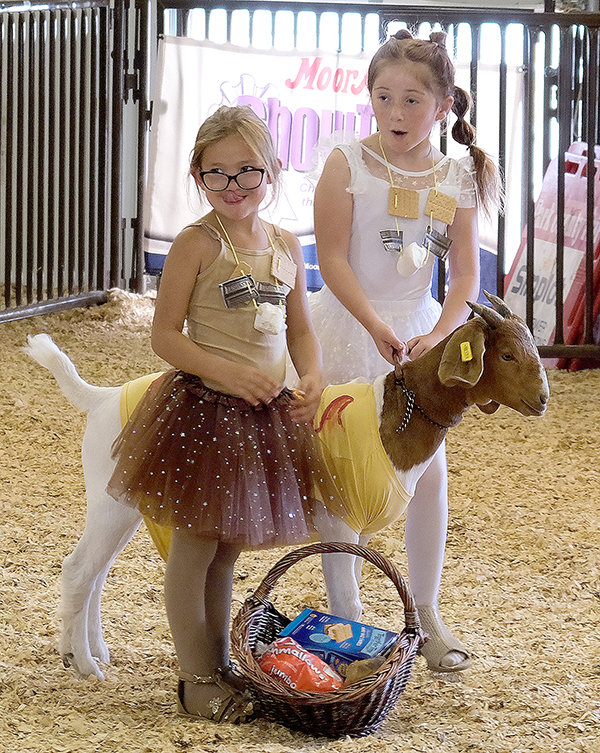 Noel Fisk (left), and Opal Miller dress up as S’mores with their goat for the Park County Fair Dress a Goat Show.
Tribune photo by Braden Schiller
Posted Thursday, August 4, 2022 8:20 am
By Braden Schiller

Park County closed out another successful fair week as of Sunday, with attendance being well over that of last year’s fair.

William Wood, who stepped into the role of events manager a little under three months before the fair, said the event saw roughly 8,000 people, which is an increase of 1,000 over the previous year’s fair.

According to Wood, the fair went great  — especially considering the short amount of time he had to work with it.

Wood said he’s thankful a lot of things were done before he arrived, but looking forward to next year’s fair, he is “very ready to go a lot further ahead of schedule than this year.”

Wood said that while the turnout is good, he thinks that the grandstand events should sell out every night.

“We need the public’s input for next year for sure — see what the public wants and get those seats sold,” he said.

“Fair was a good week,” he said.  “Fair is always a good time to reconnect with people in the community.”

He added that his officers enjoyed their time and conversations with the Park County community throughout the week.

The Park County Fair Parade took place on Saturday with 62 participants. Park County School District 1 board members Laura Riley, Kim Dillivan and Beth Brazelton served as the parade’s judges, while Jay Curtis was the grand marshal of the parade.

Unlike last year, this parade did not have a host and opted to place only the top three floats.

These categories were scored on a scale of 1 to 5. The top three floats received $75 in Powell bucks for first place; $50 for second place; and $25 for third place.