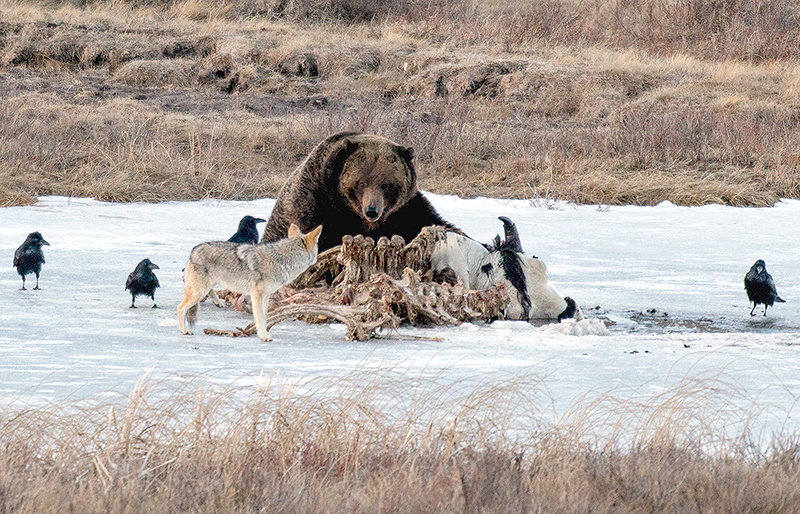 A grizzly bear guards a bison carcass in April while a coyote and a few ravens hope for a portion in Yellowstone National Park. Recent precipitation has greened up the landscape and helped to provide an abundance of food for hungry bears coming out of a late season snow event. Conflicts are currently down compared to past years, partially due to weather keeping humans out of their habitat.
Tribune photo by Mark Davis 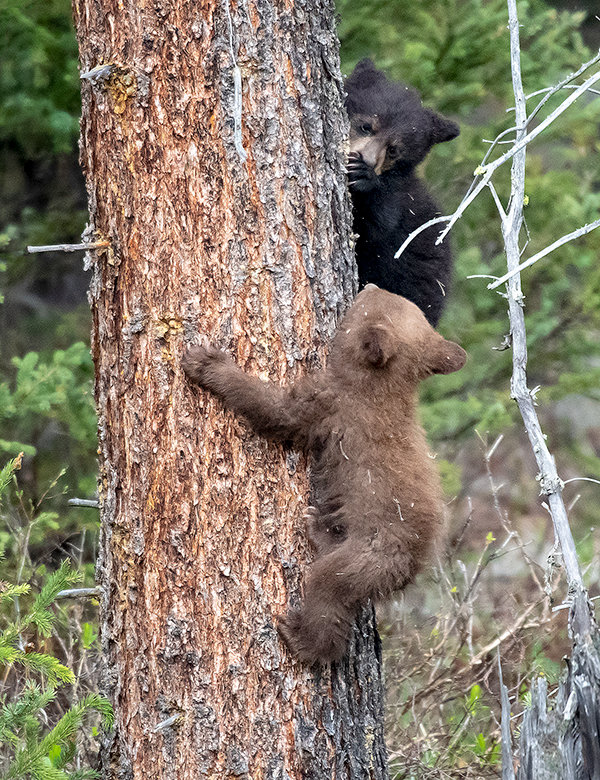 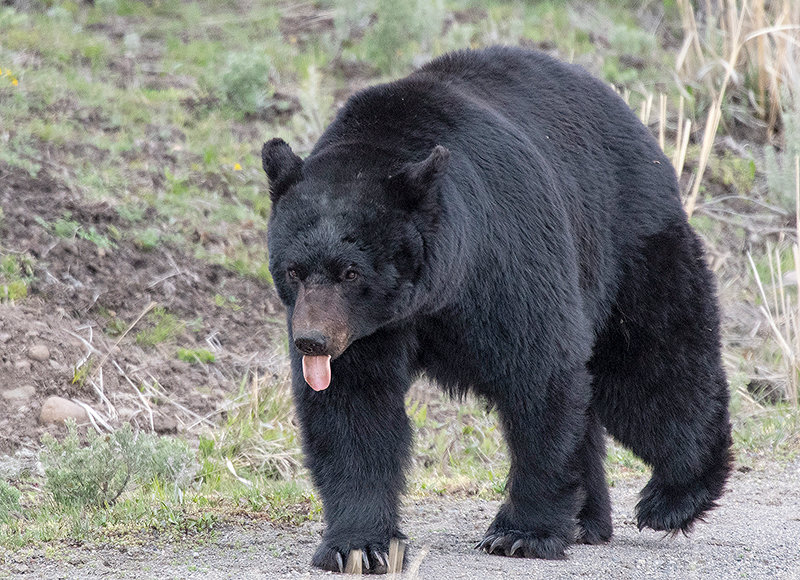 A black bear boar travels through Yellowstone National Park, seemingly commenting on all the attention. Black bears are more likely to be a predatory species toward humans than grizzly bears, according to large carnivore experts.
Tribune photo by Mark Davis
Previous Next
Posted Thursday, June 23, 2022 8:25 am
By Mark Davis

The state’s top large carnivore expert said Tuesday a wet spring has provided an abundance of food for hungry grizzly bears coming out of hibernation. That, combined with other factors — including the removal of some aggressive bears last year and fewer humans in bear habitat due to the weather — has helped tamp down conflicts with humans this year. At least so far.

“The moisture has really helped the landscape green up and is providing a lot of food for bears across landscapes. We’ll see how that goes throughout the course of the summer as things dry out,” said Dan Thompson, the department’s large carnivore section manager.

According to reports from the Interagency Grizzly Bear Study Team, only one conflict between grizzly bears and humans has resulted in permanent removal from Wyoming’s ecosystem.

On April 15, The department’s large carnivore biologists removed a grizzly for cattle depredation in a collaborative decision with the U.S. Fish and Wildlife Service, which is responsible for all management decisions while grizzlies are protected under the Endangered Species Act.

The adult male grizzly bear was located near the Greybull River outside the demographic monitoring area — an area deemed suitable habitat for the species.

Permanent removal can happen in one of two ways.

Live-trapped grizzlies can be removed and sent to a new home out of the ecosystem, like a zoo — but that is so rare, due to the lack of room for the species in controlled facilities, that it’s hardly worth mentioning.

In many cases, grizzlies are euthanized after they have had multiple conflicts with humans and continue to feed on livestock or prove aggressive to humans even after management efforts, including relocation.

The Game and Fish has been relocating grizzlies since the species was listed for protections under the Endangered Species Act in 1975.

The department averages about 20 relocations a year in a labor-intensive process involving multiple agencies and boots on the ground.

Yet, in the past decade, there have been fewer bears moved.

Thompson explained in a previous interview the ability to find available habitat is more difficult as the species has reached its carrying capacity inside its core habitat and especially now as more people are seeking outdoor recreation.

In 2021, 31 grizzlies were removed in management decisions in Wyoming. By the third week of June last year, 5 grizzlies had already been removed.

Thompson is hopeful but has already had his hands full with frequent calls about aggressive black bears.

“We’ve already had some fairly bold black bear conflicts that we’ve been dealing with,” he said.

He points out there are more black bears in the state than grizzlies, so a higher number of conflicts is expected.

“I see a story almost every day about an aggressive black bear going after a person somewhere,” he said, pointing out that black bears are more likely to be involved in a predatory attack than grizzly bears. “You have to put it in perspective, there’s a ton more black bears on the landscape.”

Thompson receives news about bears from across the country, which accounts for the number of reports he receives.

The department was challenged by weather in a recent live trapping effort in the Crandall/Sunlight district.

The goal was to do health checks and fit several grizzlies with tracking collars. With traps set — which require daily backcountry trips to check them — a late season blizzard brought 3- to 4-feet of snow to the target area. It was a hardship for the team, but the members worked through it and managed to trap seven grizzlies and collar four of them.

“We were out without electricity for four days and just kind of weathered the storm. But we still managed to get bears caught, get collars out, and get out of there with everybody safe and sound.”

Then, as the mission was complete, the team struggled to retrieve all the traps due to the June 12 flood.

A massive 27-year-old male grizzly was among those captured. He was in really great shape, Thompson said, and was so big around his neck that staff decided not to collar him. One detail was apparent: the grizzly’s teeth weren’t in great shape.

A recent photograph circulating on social media discussed the dental health of bear 399, the world’s most famous grizzly bear. While many see this as a bad sign, Thompson said the sow obviously is resourceful enough to find food she can consume.

“I’ve been wondering about [399’s] teeth for a long time. The bottom canines look better than I would have expected,” he said, “but there are no incisors left.”

When members of the team trap a bear, they sedate it for about an hour, giving them time to measure and check the bear for overall health. They will look at the teeth, but they aren’t equipped to do dental hygiene.

“We don’t do any of our own dentistry, I’ll put it that way. We let nature take its course,” Thompson said, adding that the ability of bears to heal is “astronomical.”

If a live-trapped grizzly’s teeth are in bad shape and it is emaciated, the team will euthanize the bear.

“It’s the ethical thing to do,” he said.

Bears that are in bad shape are more likely to have conflicts searching for easier food sources  — sometimes near residential areas, he said.

This past spring, there have been many social media posts from people who have witnessed cases of infanticide — typically when a male kills the offspring sired by a previous male to enable the sow to be bred earlier.

Thompson can’t explain why there have been more cases of this happening in view of wildlife watchers other than theorizing that there is a recent trend of increased bear watching.

“Some have made it their job,” he said.

The public cases of infanticide have increased the number of media requests for the department.

“It gets a lot of media attention. This seems to be a new phenomenon this year, but we’ve received a lot more media requests recently based on a video on YouTube or Facebook,” said Thompson. “It allows us to shed light on the biology and ecology of bears. So I guess it’s not a bad thing.”

About 300 to 400 grizzly bear cubs are born each year, he said, adding that the population inside the demographic monitoring area currently stands at 1,069.

Thompson is pleased there have been fewer conflicts this year, but warns the season is young.

“Things could change drastically in the next few weeks,” he said, refusing to accept that the downturn in conflicts is anything more than a fortunate and most likely temporary situation. Recent precipitation has been a blessing for bears searching for food, but the area is still gripped by drought.