It was a season filled with highs and lows for the Powell Middle School eighth grade football team, with the Cubs finishing 4-3 overall and 4-1 in conference play to finish second in … 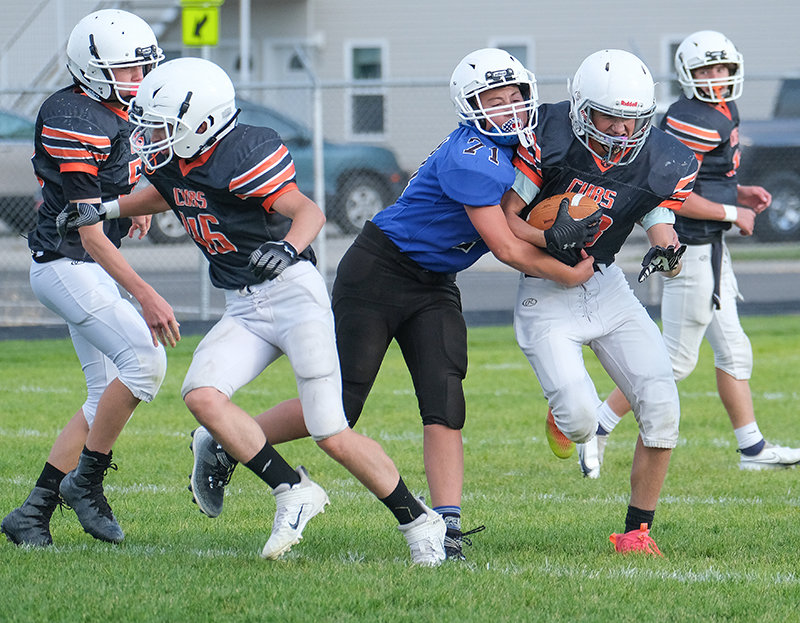 Eighth grader Broc Frank fights through a Lovell tackler during the Cubs game in October. The eighth grade team finished second in the conference with a 4-1 record.
Tribune photo by Seth Romsa

It was a season filled with highs and lows for the Powell Middle School eighth grade football team, with the Cubs finishing 4-3 overall and 4-1 in conference play to finish second in conference.

The Cubs started out their season scraping by Riverton with a 16-13 victory to start out 1-0 on the year.

“That Riverton game was a game they lost last year so getting that first win was nice,” coach Bryan Bonander said.

A difficult three weeks followed, where the Cubs scored in only one game in a 26-12 loss to Laurel before being shut out 62-0 by Sheridan and 38-0 by Cody to move to 1-3 midway through the season.

“We were kind of playing with a skeleton crew starting with that Sheridan game,” Bonander said.

In that game the Cubs lost Breckyn Kobbe to an ankle injury and feared they had lost their quarterback, Ben Ostermiller, to an injury as well.

In the Cody game the Cubs also lost Hoyt Wells to injury as well as Tanner Seifert to injury.

Powell responded to those three losses by finishing the season with a three game win streak, defeating Worland 27-0, Lovell 26-6 and Lander 40-6 to end the 2022 campaign with a 4-3 record.

Bonander said he was impressed with the way the team responded to the injuries, finishing the season with a strong victory against a Lander team that had defeated the Cubs last season in seventh grade.

One of the standouts on the team was Ostermiller. Bonander said he tried to move around to tailback after injuries plagued the team, but an injury to Seifert forced Ostermiller back to the quarterback position.

Another player who impacted the team was Broc Frank, who made the move from Red Lodge to Powell and started out on the team as a receiver.

“He was a big contributor, I ended up putting him at tailback at the end of the season and he was a slippery little player,” Bonander said.

A new addition to the team was Garrett Lennon, who Bonander said had not played a snap of football before this year but came in and played center for the Cubs throughout the season.

Bonander said it was a fun group that was dedicated to come to practice and continued to practice hard throughout the season.

He said that one of the hardest things this season was learning how to practice with the team, as depth became an issue after the injuries.

One example was when he moved Frank to running back, and he quickly saw Frank adjust to the position, which allowed him to see things differently for the team.

“You never want to see kids get hurt, but it was a unique chance for kids to step up and play in new roles,” Bonander said.

As the group heads into high school, Bonander is hopeful they will continue on and will not see a drop off in players.

He said the last couple years of players, mixed in with a strong seventh grade group behind them, should produce strong football for the Powell High School Panthers for years to come.