Diving into a new season

Diving into a new season 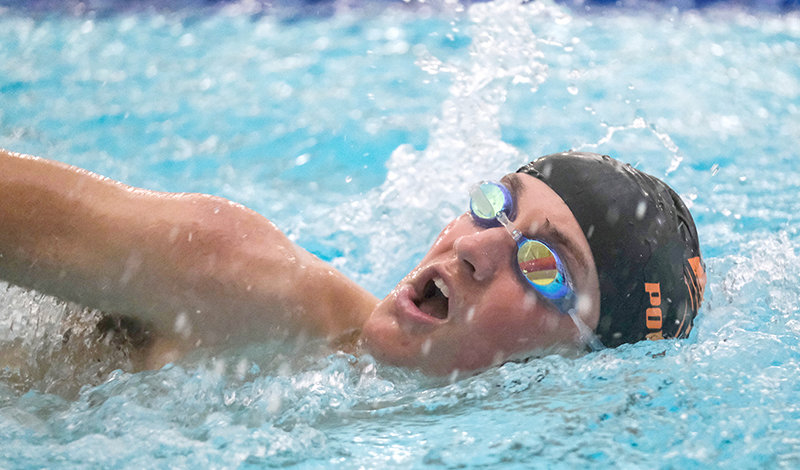 Tristin Dicks swims the freestyle during practice on Dec. 2. The Panthers return a wealth of experience as they start the 2021-22 season at home on Friday with a quad meet. An invitational in Cody follows on Saturday.
Tribune photo by Seth Romsa
Posted Thursday, December 9, 2021 8:20 am
By Seth Romsa

“We have increased our depth a lot. We have a lot of different abilities in swimming and diving from little all the way to middle school and USA experience,” Panthers head coach Stephanie Warren said. “It is going to be fun to see how they grow and change.”

The Panthers placed sixth overall at last year’s Class 3A state meet, and are looking to make a push forward this year. The team is the largest that Warren has seen in her nearly 20 years, with 25 rostered swimmers and divers to begin the season.

On the diving side, Warren said the team will sport its largest group of divers ever, with seven athletes. They include senior Ben Hawley, who was the Panthers’ top diver at state last year in 11th place, along with Gehrts, Frank and sophomore Jon Hawley.

Warren said she was surprised with the diving results at last year’s state meet, but expects all of her divers to come back and qualify for state again this year.

Warren said they expect tough competition from Lander — which has won 25 straight team titles — along with Green River, which moved down to 3A last year. Buffalo, Lyman and Rawlins also finished ahead of the Panthers.

“A podium finish is definitely a goal for us,” Warren said. “Will it happen? I do not know because we have so many new swimmers. You can take a swimmer with no experience at all and see them with a podium finish at the end of the season, so you never know.”

Warren said there is a sense of excitement with this being the Panthers’ largest team in all of her years as the coach — and they return a wealth of experience from last season.

The Panthers will face slightly fewer restrictions than last year, as they will be allowed to take part in meets as opposed to strictly duals, triangulars and quads.

In a change for the 2021-22 season, the conference meet will be a north and south format as opposed to east and west like past years. Instead of facing schools like Lyman, Rawlins and Pinedale at conference, the Panthers will square off with Buffalo, Worland, Cody, Newcastle and Douglas.

“It will be a new set of teams that we will compete against at conference that we have not competed against before,” Warren said. “I think it will be good and it will help us a lot.”

Warren will once again be joined by assistant coach Jerry Rodriguez, as they look to lead the mostly experienced Panthers team into a new year.