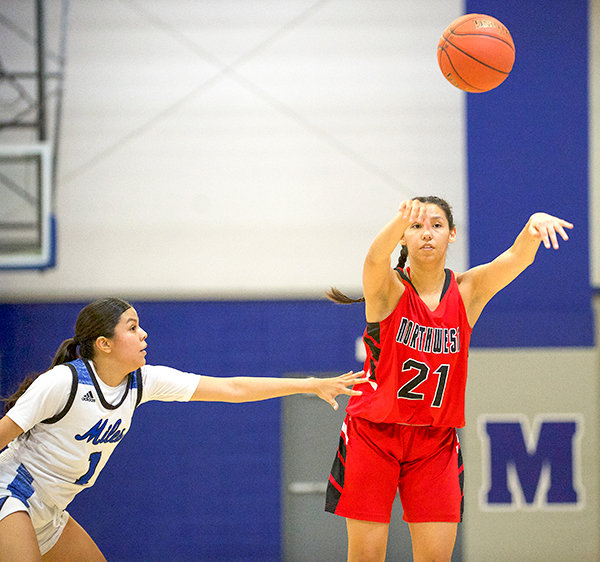 The weekend began Thursday with a matchup against No. 10-ranked College of Southern Idaho (CSI), which came into the matchup against the Trappers with a 9-1 record on the year.

The game could not have started worse for the
Trappers.

Six missed shots accompanied by four turnovers saw CSI jump out to an 11-0 lead before NWC’s Brenna Rouane hit a jumper with 4:54 remaining in the first quarter.

The Trappers then went cold again, not scoring for the next 3:30, and ended up on the wrong side of a 20-7 scoreline heading into the second quarter.

Shooting and turnovers continued to plague the Trappers in the second period, as CSI continued to pile on the pressure. NWC trailed 43-21 at halftime, after finishing the first half shooting 20.8% from the field and 20% from 3-point range with 18 turnovers.

Davis said the Trappers had little time to prepare for the Golden Eagles, as they learned just two days prior that a game against Utah State University Eastern had been canceled due to COVID-19.

The second half was more of the same, as the Trappers could not find a way to get the lid off the basket and break the pressure from the Golden Eagles. NWC trailed 66-29 heading into the fourth quarter, which CSI continued to dominate en route to a 86-37 result.

Overall, the Trappers were led in points by Rouane who was the only Trapper to finish in double digits with 13.

Going into Friday, the matchup against hosts Salt Lake Community College (5-2) did not get any easier for the Trappers as the poor shooting again doomed Northwest.

Another slow start had the Trappers trailing 8-0 before a pair of free throws by Nayeli Acosta gave Northwest their first points three minutes into the contest.

Early pressure forced NWC into four turnovers in the first period, and poor shooting from the field (3-of-13) gave the Bruins a 19-8 lead.

Poor shooting again plagued the Trappers in the second quarter, as more than four minutes passed in the period before Northwest found the bottom of the net to make it 27-10.

The Trappers added a pair of Acosta free throws and a Celina Tress layup to trail 37-14 at halftime.

Northwest finished the first half shooting 5-of-32 from the field for 15.6%, and made none of their eight 3-point attempts.

“SLCC is good, they are a very athletic team and we could not handle it,” Davis said.

The rest of the quarter was even between the teams despite nine turnovers by Northwest, as the Trappers trailed 46-21 heading into the fourth quarter. SLCC wound up taking a 63-32 victory.

Overall for the game, the Trappers finished shooting 22.9% from the field, 7.7% from 3-point range and 75% from the line. Rouane led the Trappers with seven points, while Kiana Quintero collected seven rebounds.

Coming off their two worst shooting performances of the season, the Trappers went into Saturday with a renewed focus against a Utah All-Star team.

Northwest started the game up 9-4 after the first four minutes, and finished the first quarter leading 19-18.

The second quarter was fast, as Northwest continued to put together their most complete performance as a team shooting-wise. They pushed the lead to six off back-to-back 3-pointers from Acosta, but the all-star team finished on a 9-2 run to take a 41-40 lead into halftime.

That run extended into the second half as the all-star team went up 49-42 and outscored the Trappers 22-11 in the third quarter.

Offensive rebounding was key in trying to get the Trappers back into the game, as Northwest continued to get extra possessions and pulled within single digits with just under three minutes left.

With continual pressure, the Trappers pulled to as close as seven points, but the scoring stopped in the last 1:30 and NWC fell 79-70.

After a month-long road trip to start the season — one that included matchups against three top-ranked teams — the Trappers will play at home for the first time this weekend as they take on the Carroll College JV.

Davis is hoping this return home will help the young Trappers gain their confidence after a difficult final road trip, as they look to fine tune things in their final three games before the winter break.

Friday’s game against Carroll will be in the late time slot, starting at 7:30 p.m., with a rematch at noon on Saturday as part of the First Bank Shootout.