Dinghies in the desert

An area artist going by the pseudonym Greg Wymoing — no, that’s not a typo — wants you to think. And smile.

He recently installed a sculpture — “Hull’s Half …

Dinghies in the desert

Recycled boats grace the skyline on a hill overlooking U.S. Highway 310 north of Frannie. The sculpture was created by an area artist who hopes it will remind viewers of the value of time with family and friends.
Photo courtesy James Allender 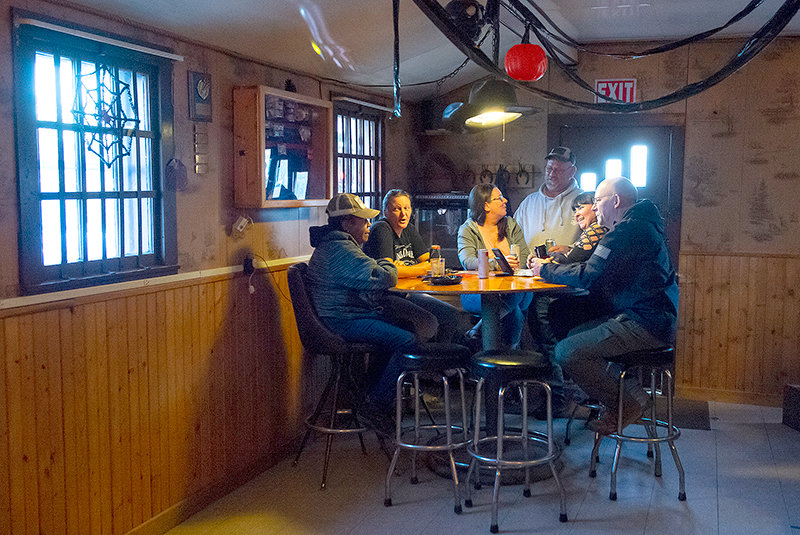 A group including Marty Roedel, Julie Moore, Jenniffer Hankins, Grant Hankins, Debbie Beard and Garrett Pike enjoys a break at the Frannie Bar. The consensus among the group of area residents was that the sculpture is a positive addition to the tiny town’s landscape.
Tribune photo by Mark Davis
Previous Next
Posted Thursday, October 28, 2021 8:25 am
By Mark Davis

An area artist going by the pseudonym Greg Wymoing — no, that’s not a typo — wants you to think. And smile.

He recently installed a sculpture — “Hull’s Half Acre: A Dozen Dinghies in the Desert” — on a hill outside Frannie. Overlooking the U.S. Highway 310, the 12 recycled power boats are positioned on their ends, embowed as a group. It has drawn stares and wonderment from many passing through Wyoming’s most northern enclave.

The sculpture sits next to an old, paint-faded Cadillac, some older firefighting equipment and a bright green John Deere tractor with yellow attachments. They are also sculptures, according to the artist.

Wymoing is using the oddly spelled pseudonym because he likes his privacy. But he’s a longtime businessman in the high desert, also known as Riley Cooke of Bridger. He installed the sculpture garden on the hill to convey messages, he said in an interview at the property last week. Some are political statements, he said, “but not like that Trump and Biden crap.”

“I want people to stop and think. I want older generations to start conversations with young people. And if I can start one smile, I’ve done my job,” he said.

The “dinghies” are not about boats, he said.

“It’s about spending time with family and friends,” Cooke said. “Boating is about family time. Never miss the opportunity to create memories.”

The Cadillac and trailer are a salute to cowboys.

“In the days before decent 4x4 pickups, cattle buyers pulled their horse trailers with a Cadillac, the car of choice,” he explained. “They would stop on a hill in order to find the car after riding unfamiliar, open ranges, while looking at cattle to be purchased. This cowboy never returned. And with him left the handshake deal, kindness to others and most common sense. We pray for his early return. Society desperately needs the traits he has with it.”

The tractor is meant to be a tribute to agricultural producers.

Hull’s Half Acre is a play on Hell’s Half Acre, the otherworldly-looking geological oddity near Casper. The boats are doing exactly what Cooke had hoped: starting conversations. Reviews are mixed, but Frannie resident Marty Roedel likes what she sees.

“It will get people to slow down to look,” she said while relaxing with friends at the Frannie Bar. “I like it.”

Garrett Pike also likes the addition to the skyline.

“If you take time to look at the boats, it looks like the rays from the sun,” he said.

Cooke says the sculpture is best viewed at sunset, when the sky is full of color. Northwest College student Kelsey Herman spotted them just before sunset, while driving through Frannie on her way back to Powell from Billings.

It was too late for the photographic communications student to get a photograph so she returned a few days later. Herman wanted a closer look and made it halfway up to the boats before Cooke pulled into the parking lot, honked and called her down.

While Cooke wants to share his art with the world, he doesn’t want people trespassing on his property. Neighbors are also concerned that private roads and drives will become overpopulated with people wanting to hike to the top or use their land for a different vantage point. It’s also illegal to access private railroad property anywhere other than a designated pedestrian or roadway crossing, according to the U.S. Department of Transportation. Access to the sculpture is not at a legal crossing point.

When Cooke pulled up, “I was like freaking out that I was going to jail or have the cops called on me,” Herman recalled.

As it turned out, Cooke wasn’t there to bust her, although he did remind her of railroad and private property rules.

“He was this, like, sweetest human I ever talked to,” Herman said. “He was excited that I was there just to enjoy the beauty of his art and to photograph it and to mix my vision of art with his vision of art — like, combine the two.”

She was amazed by his commitment to his vision.

Cooke collected boats for more than a decade before installing the sculpture. Not only was it hard to get them in the arrangement he wanted, it wasn’t easy toting around large boats in the desert.

He had help. Among those who helped, his son James played a big part in the labor to set up the installations. But it was all Cooke’s idea, James said. “I just do what he tells me.”

The artist is also working on motorcyle- and 9/11-themed displays and isn’t done with the open-air gallery. He plans to direct people to a parking lot with signage available explaining the installations. He also plans to install a frame so people can line up the art for photos.

“A lot of people believe art is framed and hangs on a white wall,” he explained. “So we’re gonna go ahead and put a big thing down there with the frame, a wrap, and the name and you can stand back, take a picture right through the hole at the boat or whatever.”

Cooke is moving forward with his project, unafraid of what people think of his vision. He can explain his inspiration for each piece with precision, due to the length of time he has spent conceiving the ideas — essentially the definition of conceptual art, which is art for which the idea (or concept) behind the work is more important than the finished art object. Despite it all, Cooke is uncomfortable with being labeled an artist.

“I’m on the verge of eccentric — more so than not,” he said, debating himself out  loud. “Maybe I’m just an eccentric artist.”