A set of defensive mistakes continued a downward trend for the Northwest men’s soccer team on Friday and Saturday. The Trappers fell 2-0 to Laramie County Community College and 5-2 to Western … 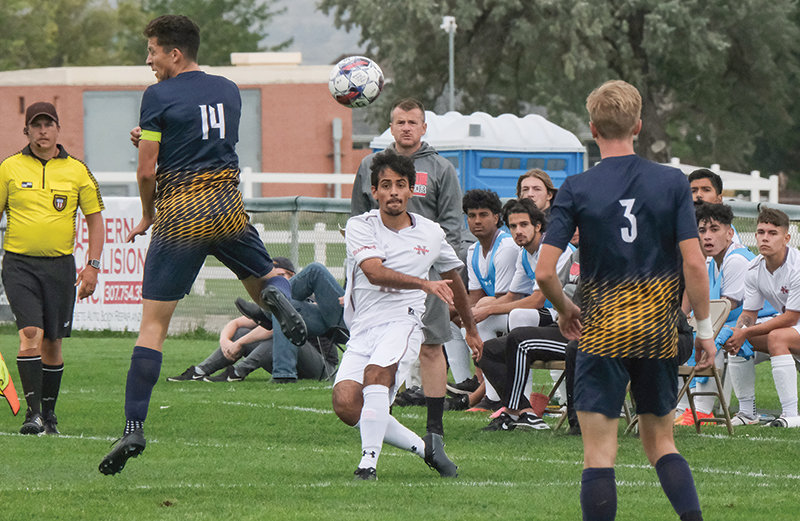 Fernando Luiz Waiandt Bonfirm plays a long ball over the Trinidad defense on Sept. 16. Northwest had its losing streak extended on the road against LCCC and Western Nebraska.
Tribune photo by Seth Romsa
Posted Thursday, September 29, 2022 8:10 am
By Seth Romsa

A set of defensive mistakes continued a downward trend for the Northwest men’s soccer team on Friday and Saturday. The Trappers fell 2-0 to Laramie County Community College and 5-2 to Western Nebraska Community College.

Beginning the weekend in Cheyenne, the Trappers (3-8-1 overall, 1-5 Region IX) started the game on the right foot against the host Golden Eagles (4-5 overall, 4-1 Region IX).

“We started well, the soccer we were playing was excellent,” coach Rob Hill said.

The play between the Trappers led to attacking opportunities, but a consistent trend for Northwest has been not taking advantage of these attacks.

That trend continued when the Trappers were unable to put any opportunities away, opening the door for LCCC.

“We make chances and do not bury them,” Hill said.

An opening goal came 30 minutes in for the Golden Eagles off a defensive error, giving the hosts momentum going forward.

Another goal came just 12 minutes later, putting Northwest in a 2-0 hole going into the half after another defensive error.

In an attempt to rally, the Trappers’ style of play changed from possession-based to long balls over the top.

“When we play a possession-based game we are hard to beat,” Hill said. “When we turn to longer passes we struggle.”

Northwest was unable to make any significant chances in the second half, and lost 2-0 to the Golden Eagles.

Looking to rebound Saturday, Northwest made the short trip to Scottsbluff, Nebraska, to take on the Western Nebraska Cougars (4-4 overall, 4-1 Region IX).

Western Nebraska got things started early and often, scoring three goals inside the first half hour and taking a quick 3-0 lead.

Ricardo Farias da Silva scored on a penalty for the Trappers to make it 3-1.

The Cougars responded right after and put one more passed the Trapper defense to take a 4-1 lead into the half.

“We had poor defensive mistakes,” Hill said. “We are not working together as a unit.”

Western Nebraska continued to pile on the goals, adding another midway through the second half to make it 5-1.

Farias da Silva got one more before the final horn, making the final score 5-2 and extending the Trapper losing streak to six games.

“We have to fix the defensive side of things,” Hill said. “We had another big film review to teach how to defend and be organized.”

Northwest heads back out on the road at 3 p.m. Saturday to take on Central Wyoming (1-7-1 overall, 0-3-1 Region IX) in a non-conference matchup.

Despite this being a non-conference matchup, the Trappers expect to learn a lot about the Rustlers before they make the return visit to Powell in two weeks.

Hill is confident in the ability of both his men’s and women’s teams, and said they can pull some surprises if given the opportunity.