Powell High School speedster Jay Cox is taking his track career to the Division I level, signing a letter of intent this week to run for the University of Wyoming.

However, Cox made clear that he … 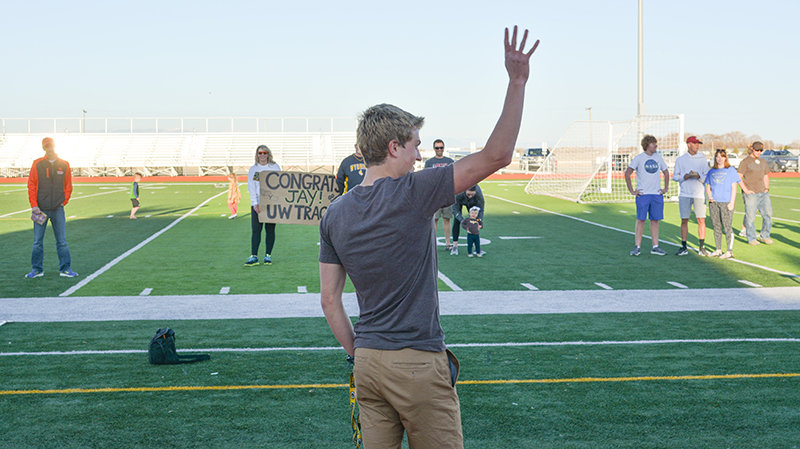 From a safe distance, Jay Cox waves to a group of people who came out to support him on Tuesday night at Panther Stadium, as he signed to join the University of Wyoming track team next school year.
Tribune photo by CJ Baker 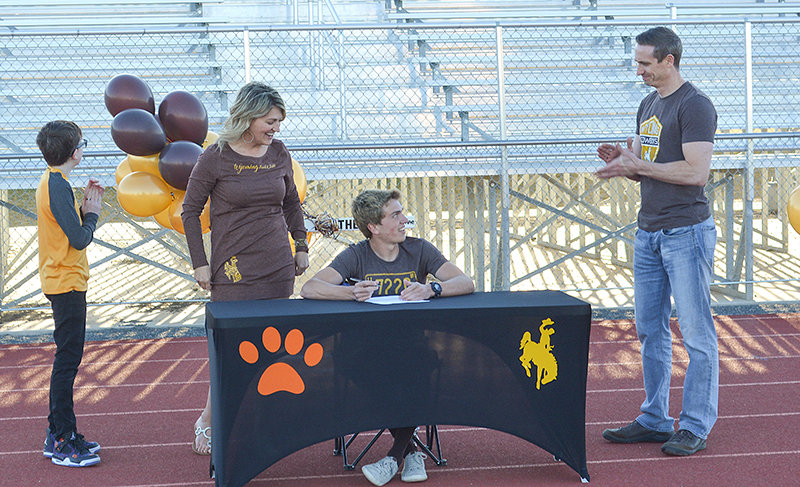 Powell High School speedster Jay Cox is taking his track career to the Division I level, signing a letter of intent this week to run for the University of Wyoming.

However, Cox made clear that he will be a student first and an athlete second while at UW.

“I’m excited to get to go to school and the classroom portion of it,” said the senior, who carries a 4.0 GPA, “and getting to run track is a bonus.”

PHS head track coach Scott Smith said that the Cowboys are “getting a steal” in Cox.

Cox picked up four gold medals at the Class 3A State Track and Field Championships in 2019: in the 400 meter dash and 800 meter run — where he posted the fastest times across all competitors — and as a member of the 4x400 and 4x800 relay teams. Before COVID-19 scrapped the season, Cox was expected to have another strong spring with the Panther track team.

“I’d love to have seen it,” coach Smith said of Cox’s senior campaign. “I’m sure the school records were going down.”

Still, Cox ended his PHS athletic career with the rare feat of being a state champion in three different sports. He took the No. 3 doubles title alongside partner Logan Brown at last fall’s state tennis tournament, helping the Panthers run away with the state team title. Then at the Class 3A State Swim Meet in February, Cox won another gold medal as part of PHS’s 200 free relay team.

“It will be sad to leave those two sports [swimming and tennis] behind, for sure, but I’m happy that I’ll get to continue my athletic career into college,” Cox said, noting that many people don’t get that opportunity.

Cox will face a whole new level of competition in running at the DI level, but coach Smith said good competition “just makes him better.”

“He’s going to go down there [to UW] and he’s just going to get better,” Smith said, saying that Cox is still developing as an athlete. The coach also praised Cox’s work ethic — the senior has been continuing to train even with the spring sports season called off — and predicted that Cox will benefit from concentrating on track all year long.

During a tour of the UW campus last fall, Cox saw a list of the top 10 times in the 400 meter dash.

“I think I’ve got a shot at maybe making that list,” he said, “and I’d be really happy if I could.”

In picking a university, Cox applied to four institutions: UW, the Colorado School of Mines, Michigan State and Stanford.

Clad in UW garb for Tuesday’s signing event at Panther Stadium — even down to brown and gold socks emblazoned with the state’s bucking horse and rider — it was silly to ask if he’s excited to become a Poke.

“I was born in Wyoming so, of course,” he said.

However, Cox said choosing UW ultimately came down to a scholarship: The student’s decision was effectively made when he was offered a full-ride Trustees’ Scholars Award.

“... it was just icing on the cake that I got to run track there as well,” he explained.

Cox plans to study computer engineering while in Laramie, perhaps working toward a job at NASA or elsewhere in the aerospace industry.