Saturday night’s final home game of the 2022 season for Wyoming saw the Cowboys do what they’ve done throughout the season — fight to the very end. But for the first time this year, … 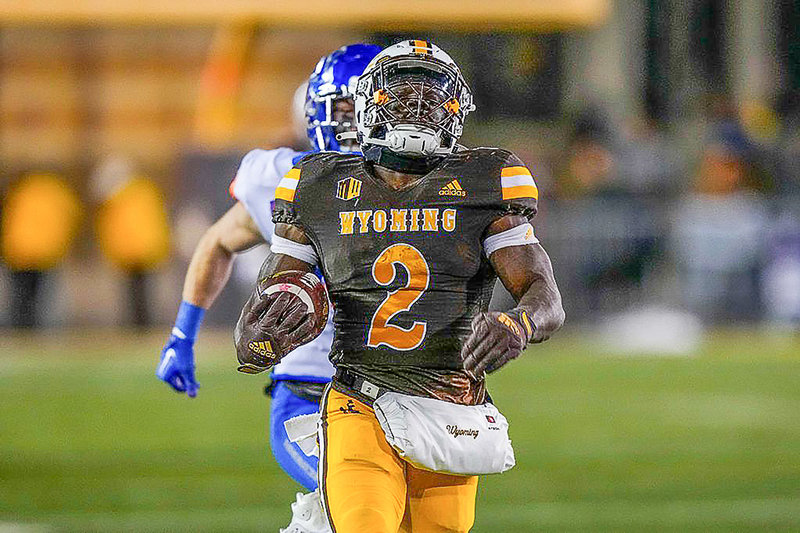 Saturday night’s final home game of the 2022 season for Wyoming saw the Cowboys do what they’ve done throughout the season — fight to the very end. But for the first time this year, Wyoming lost a game decided by one score as Boise State held off the Cowboys for a 20-17 road victory in Laramie. Wyoming is now 7-4 overall and 5-2 in Mountain West play. Boise State improved to 8-3 and 7-0 in conference play and clinched the Mountain Division title.

Wyoming jumped out to a 10-0 lead in the game on a first quarter touchdown run by wide receiver Wyatt Wieland and a 53-yard field goal from place-kicker John Hoyland. Boise State narrowed the lead to 10-6 by halftime on two field goals of 22 and 47 yards by kicker Jonah Dalmas.

The Broncos took their first lead of the game at 13-10 at the 4:57 mark of the third quarter on a 5-yard TD run by quarterback Taylen Green. Two series later, Wyoming junior running back Titus Swen exploded for an 83-yard touchdown dash to give the Cowboys the lead back at 17-13 with only 42 seconds remaining in the third quarter.

Midway through the fourth quarter, Green connected with wide receiver Billy Bowens from 38 yards out to put the Broncos back in front by three at 20-17.

Wyoming’s offense had two possessions after Boise State regained the lead, but wasn’t able to convert either into a score.

It appeared that the Pokes had run out of opportunities as Boise State took possession with 1:48 remaining in the game and drove down to the Wyoming 39-yard line, but the Cowboys weren’t done yet. On a run up the middle by Bronco running back George Holani, Cowboy nose tackle Gavin Meyer knocked the ball loose and UW defensive end DeVonne Harris picked up the ball and returned the fumble 44 yards down to the Boise State 21-yard line with 45 seconds left on the clock.

On first down, the Cowboys took a shot to win the game as quarterback Jayden Clemons threw the ball toward the back of the end zone for wide receiver Joshua Cobbs. But Bronco safety JL Skinner intercepted the pass to seal the win for Boise State.

After the game, Wyoming head coach Craig Bohl explained the decision to take one shot at the win and if that didn’t succeed to kick a field goal to force overtime.

“I told Tim [Polasek] let’s take one shot to score a touchdown,” said Bohl. “I want to be clear on this. I gave the green light on that play. Was it executed the way we hoped it would be — no obviously not. But I gave Tim the light to take one shot to score a touchdown and if we didn’t have it then we’ll try and kick a field goal. That was the logic. I’m disappointed for Jayden [Clemons]. I’m going to love him up. He’s hurting. If you want to be critical, be critical of me, don’t be critical of him.”

Cowboy running back Titus Swen had a career best night running behind a Wyoming offensive line who played outstanding, consistently opening up holes. Swen ended the game with a career high 212 rushing yards, including his 83-yard TD run.

“Titus [Swen] obviously played very well and beyond him playing well the offensive line played well,” said Bohl. “I thought Titus certainly had one of his better games.”

Leading the Wyoming defense were two Cowboys who recorded double figures in tackles. Safety Wyett Ekeler had a career best 12 tackles and forced the fumble that led to Wyoming’s first TD. Middle linebacker Easton Gibbs was credited with 11 tackles. Gibbs now has 99 tackles this season to lead the Cowboys, and needs only one tackle to join the 100-tackle club for the first time in his career.

Wyoming now will have to prepare for Mountain West Conference West Division Champion Fresno State in a short week as the Cowboys play the Bulldogs on Friday, Nov. 25, in UW’s regular-season finale in Fresno. That game is scheduled to kick off at 8 p.m., Mountain Time and will be televised on FS1.

Bohl was asked in his postgame press conference about the potential availability of Wyoming quarterback Andrew Peasley moving forward after he missed the game vs. Boise State in concussion protocol.

“We think he (Andrew Peasley) will be available,” said Bohl. “He started the concussion protocol this week and had progressed to the point where he was cleared for some activities. He was on the sideline today with a headset on and helping as much as he could.”