After having few cases in the first months of the pandemic, the Big Horn Basin has recently seen “a significant spread of COVID-19,” Park County’s health officer said last … 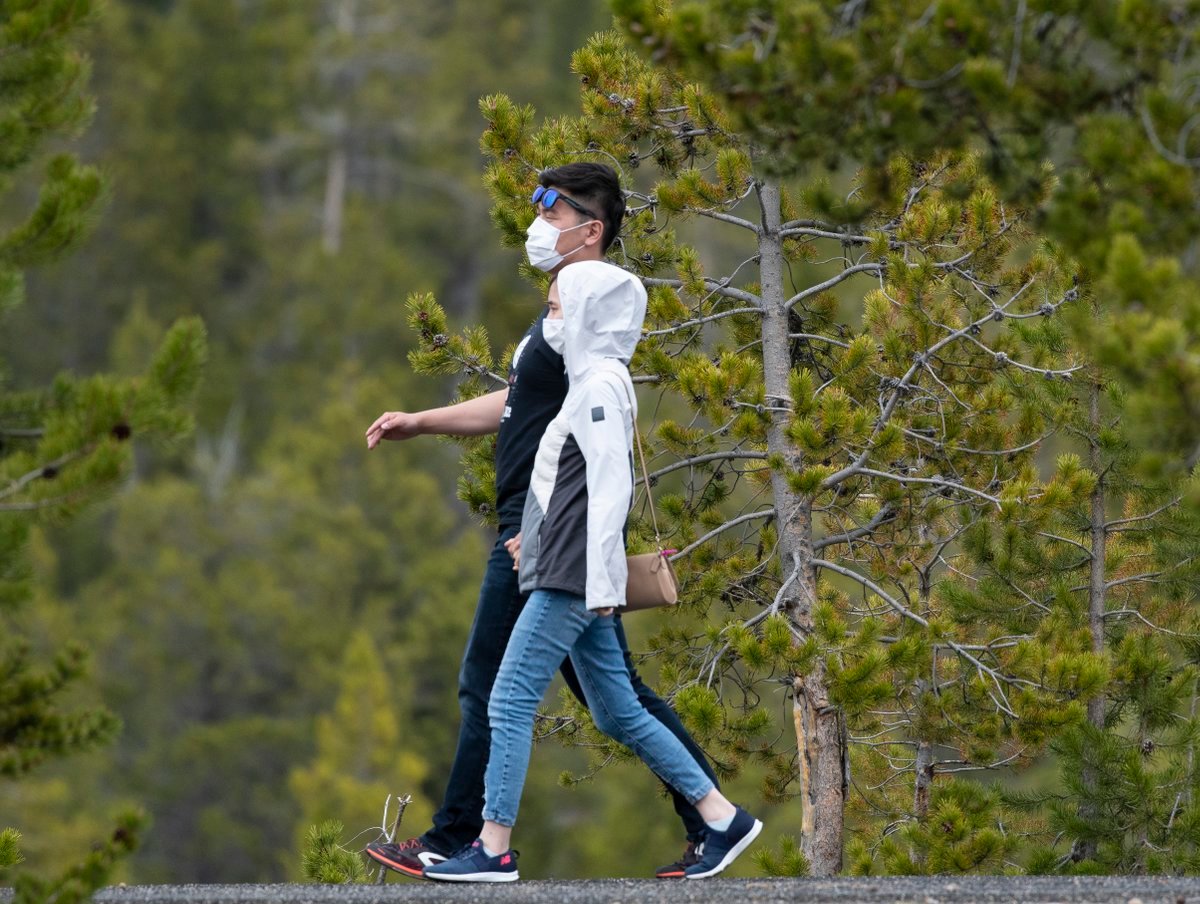 A pair of visitors to Yellowstone National Park stroll down a trail during the opening day of the park's summer season, on May 18. An increasing number of tourists in the area will 'complicate' the way that local health officials deal with the COVID-19 pandemic.
Tribune photo by Mark Davis
Posted Tuesday, May 26, 2020 5:32 pm
By CJ Baker

After having few cases in the first months of the pandemic, the Big Horn Basin has recently seen “a significant spread of COVID-19,” Park County’s health officer said last week.

Between May 15 and Tuesday — roughly a week-and-a-half — the number of confirmed cases of the respiratory disease in the Basin jumped from nine to 42.

Most of the new cases stem from an outbreak at a Worland nursing home, where two residents have died over the last week. However, Powell’s first positive test — and Park County’s first confirmed case since mid-March — was also recorded last week and, according to health officials, that woman was hospitalized in Billings over the weekend. She had fallen ill shortly after visiting a relative infected with COVID-19 in another state, Park County Public Health Nurse Manager Bill Crampton has said.

“It is important that the young and healthy get back to work while vulnerable populations are protected,” Billin said in a Facebook post last week, specifically mentioning those in nursing homes, assisted living facilities, jails and group homes.

“Those who don't live in these settings but are over 65 and/or have underlying health conditions (chronic lung disease, heart disease, compromised immunity, obesity, diabetes, dialysis, and liver disease) should continually assess the risk to benefit ratio of their behaviors and associations — and act accordingly,” Billin wrote.

He added that having an increasing numbers of out-of-area tourists through the summer will complicate things.

While some people might think it inappropriate to ease off the orders while local cases are rising, “restrictions can be gradually relaxed,” Billin said, because Powell Valley Healthcare and Cody Regional Health have prepared for a potential surge in patients and testing is “readily available.”

He reiterated that the effort to “flatten the curve” of COVID-19 cases was “not intended to reduce the total number of infections, but to reduce deaths by spreading infections out over time” and keeping medical systems from being overloaded.

“Without a vaccine, the virus will eventually spread to many in Park County,” Billin said. “We will see more infections, and maybe a few more deaths.”

Another dozen cases of COVID-19 were detected in Washakie County over the weekend plus two new cases in Big Horn County.

The cases were discovered after two rounds of an “aggressive” testing process that involved testing all employees and residents at the facility, said Washakie County Health Officer Dr. Ed Zimmerman; those who tested negative in initial tests on May 15 — a day after the first staffer tested positive — were checked again on Friday.

In a Monday Facebook post, Zimmerman said “most” of the Worland Healthcare residents who have tested positive for the disease are not exhibiting any symptoms. However, two of the infected residents at the long-term care center (LTC) have died, in deaths announced Thursday and Tuesday.

“It is important to remember that some residents of LTCs are very ill and are receiving end-of-life care. This makes it difficult in many cases to determine if Covid-19 was the CAUSE of death, a CONTRIBUTING FACTOR to a death, or was just present at [the] time of death,” Zimmerman said Monday, before the second death was announced.

He said “anyone with Covid-19 positive test at time of death will be called a COVID death for statistical purposes,” but said that type of death is “statistically very small.”

“Many previously healthy people are dying of COVID-19,” Zimmerman wrote. “Do not fall for the widespread hype that deaths are over-reported and thus Covid-19 is not that dangerous.”

He encouraged people to wear masks, noting that they are meant to protect others from people who may have the virus but are not showing symptoms. Most people infected with the disease recover on their own without needing any medical treatment, and a significant number of people can pass it along without every realizing they're sick, health officials say.

Zimmerman said Monday that a few of the people who tested positive at the Worland facility actually live in another county. Big Horn County officials said their two recent cases were women who apparently contracted it while working at the same building in another county, though they didn’t specify the county or employer.

“This underscores the need to continue safe exposure reduction practices as have been emphasized throughout this emergency,” Big Horn County officials said Sunday. “Community support and compliance is imperative at every level to protect our citizens. Safety is up to you.”

In a Monday Facebook post, Billin also noted that 30% of Wyoming’s infections are coming from community spread and unknown sources.

“This is why continued social distancing efforts are still important,” he wrote.

Gov. Mark Gordon has scheduled a 3 p.m. Wednesday news conference, at which he's expected to announce what steps the state will take when the current public health orders expire on June 1.