Counting on a fall finish

September growth is pivotal for the 2021 season within the Western Sugar Cooperative’s Lovell Factory District.

And as area growers sail through the early dig, with beets still in the field …

Counting on a fall finish 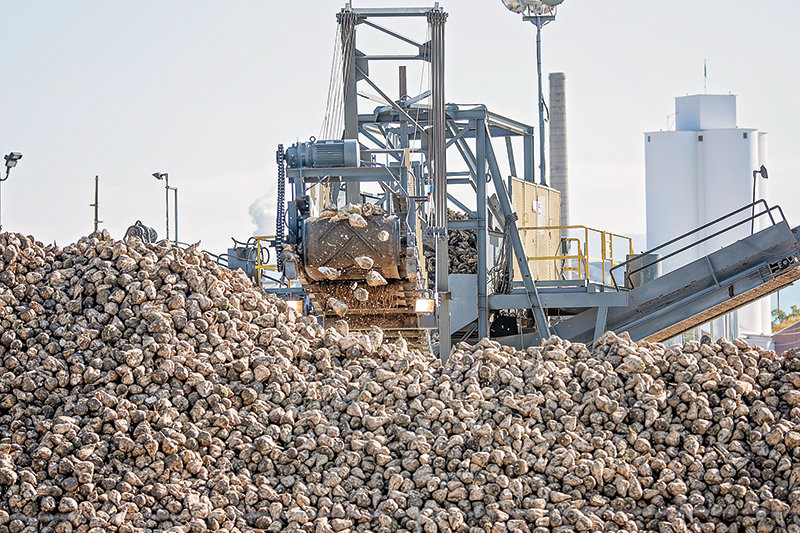 Sugar beets from the early harvest are off loaded at the Western Sugar factory in Lovell last week.
Tribune photo by Carla Wensky 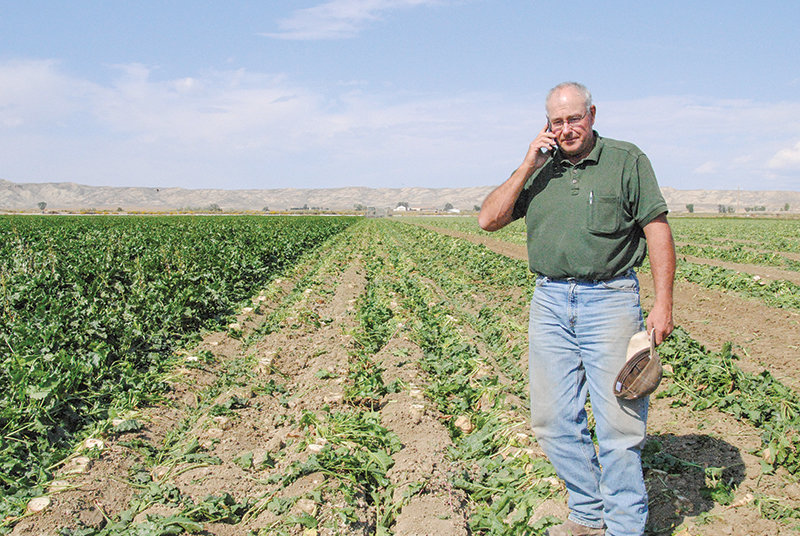 The cellphone follows growers these days. North End beet grower and Western Sugar Co-op board member Tod Stutzman takes a call from the six-row cut of a Stutzman Farms field in mid-September. Beet tops, representing ‘a lot of feed value,’ are left in the field in windrows for feeding sheep.
Tribune photo by Dave Bonner

Beets from the early dig are being transported to Lovell to kick off the 2021 campaign at Western Sugar. The regular beet harvest will get underway starting in early October.
Tribune photo by Carla Wensky 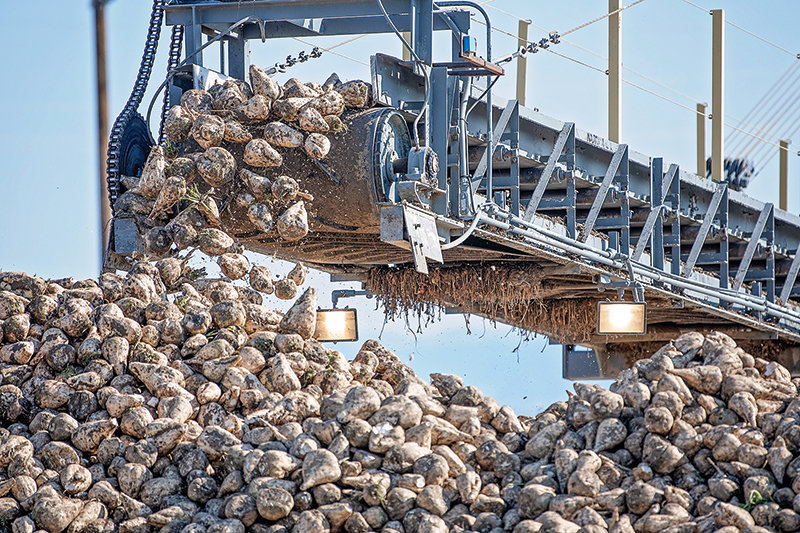 The weather outlook looks good for a profitable harvest with beets adding tonnage in the fall months. All-out regular harvest is set to begin Oct. 6.
Tribune photo by Carla Wensky
Previous Next
Posted Thursday, September 30, 2021 8:20 am
By Dave Bonner

September growth is pivotal for the 2021 season within the Western Sugar Cooperative’s Lovell Factory District.

And as area growers sail through the early dig, with beets still in the field taking on valuable weight, the outlook appears favorable. The early dig of beets in the local area began Sept. 7, with all-out harvest scheduled to start in October.

“At least we got through Labor Day without a freeze this year,” chuckled Tod Stutzman, North End grower and Western Sugar beet board member.
He was only half jesting. A year ago, an early freeze on the Labor Day weekend took everyone by surprise.

“Our family had been boating on Lake DeSmet at 97 degrees last Labor Day,” he recalled. “We were in swimming suits and flip-flops all weekend. We came back over the Bighorns that Monday, and it snowed on us. Being from Wyoming, we were prepared  to change to long pants, tennis shoes, sweatshirts and jackets.”

But it proved to be a bad omen for a start-and-stop harvest through the fall of 2020.

The quick freeze on the Labor Day weekend of 2020 was followed by unseasonably warm temperatures through the month of September. The thermometer actually climbed to the point that the regular harvest was held back a few days until Oct. 10.

Less than two weeks later, beets took a hit when an arctic weather blast plunged temperatures to single digits and even some readings of below zero. The harvest was briefly suspended and continued a roller coaster ride into November.

Those memories live on. With the first hard freeze, growth of the beets “just stops,” Stutzman said.

He and a lot of other growers are keeping their eyes on the September and October weather forecast, and at least at mid-month, they liked what they were seeing. The temperature is going to start cooling down.

He even managed a smile when he added, “But we don’t have any arctic vortexes coming.”

That is a critical factor this year, Stutzman noted. He estimated the beet crop is about two weeks behind a normal year due to a cool spring and hot, dry summer that made it a challenge to get enough water to the beets.

“September is the tonnage month. We can put on three tons a week in September if the conditions are right. Sugar steadily increases this time of year,” he added.

Stutzman said field sampling projects a district-wide 2021 crop with yields of about 26 tons to the acre. The first field harvested by Stutzman Farms in September was probably close to the 26-ton mark, “though we don’t have the final ticket yet,” Stutzman said.

Overall in the factory district of Park and Big Horn counties, planted beet acreage is down this year to roughly 15,000 acres.

“Sugar beets remain an important crop for the region. Being diversified is important, and beets help accomplish this,” he said. “With the beet payment increasing for last year’s crop and a good expected payment for this crop, we look forward to beet acreage growing in the future.”

To offset a slightly smaller crop in the region, Western Sugar Co-op beets harvested in the Bridger, Montana, area are being trucked to the Lovell factory this year.

“The co-op is facing inflation across the board, like most other companies,” Stutzman noted. “Fortunately, the price of sugar is keeping pace with inflation, and demand remains strong.”

All factories have started the processing campaign fairly well, especially the Lovell factory after investment made by the cooperative since last year’s campaign, he observed.

“This is the first time in many years Lovell is processing over 3,000 tons per day on average,” he said.

In total across the combined Western Sugar factories — in Lovell; Billings, Montana; Fort Morgan, Colorado; and Scottsbluff, Nebraska — the current slice is around 20,000 tons of beets per day in their round-the-clock operations.

The Lovell sugar processing factory is performing well as the 2021 factory campaign picks up steam, said Ric Rodriguez, Heart Mountain beet grower and a member of the Western Sugar Cooperative board of directors.

In the September dig, Western Sugar tries to keep three days of beets piled at Lovell, ahead of factory need. There were no worries about excessive heat in the storage piles at mid-month, said Rodriguez.

Receiving stations across the district continue to open in preparation for the all-out regular harvest to commence Oct. 6.

There is good news in reported sugar quality in the early going, said Rodriguez. The Lovell factory was averaging 16.99% sugar extraction in mid-September.

“It’s a good measure at this period. Beets haven’t set in piles for very long; they are fresh,” he noted. “The longer they are stored, the less sugar will be in them when it’s their turn to be sliced.”

The company had projected a 17% average sugar content for the 2021 crop and “we should exceed that,” Rodriguez said.