Dan Mortensen struggled to fit in during his early years.

Before becoming an icon in the rodeo community, Mortensen grew up in Billings, where he dreaded his days at Billings Senior High School. … 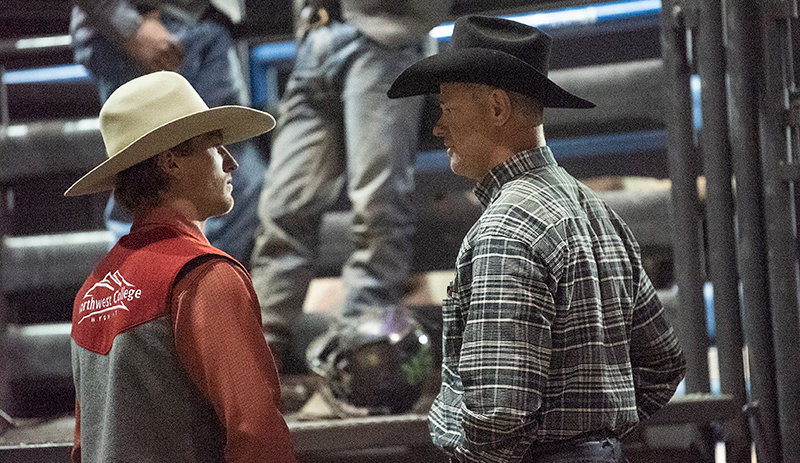 Dan Mortensen struggled to fit in during his early years.

Before becoming an icon in the rodeo community, Mortensen grew up in Billings, where he dreaded his days at Billings Senior High School. After spending his entire youth in the southern Montana city, Mortensen needed a change of scenery and a fresh start, so he enrolled at Northwest College on a rodeo scholarship.

Less than two hours from where he grew up, Mortensen found a new home.

“I really enjoyed this school; I love Powell,” Mortensen said. “High school wasn’t my thing, but when I came to Powell, I really felt like I fit in so much better.”

After two years competing for the Trappers, Mortensen joined the PRCA. He went on to win six saddle bronc world championships — tied for the most all time — and one all-around championship. In July 2009, Mortensen was inducted into the ProRodeo Hall of Fame.

Now 51 with a cemented legacy, Mortensen has found a new way to give back to his old school: working as an assistant coach.

The retired champion is on the NWC staff as an assistant coach, driving down from Billings weekly to assist riders at saddle bronc practices. Not only does this opportunity give Mortensen a chance to give back to his former school, it allows Mortensen to give back to the sport as a whole.

“I’m trying to mentor and help the young guys,” Mortensen said. “I think it’s important to keep the tradition of the sport of rodeo alive.”

This isn’t Mortensen’s first return to NWC: He served as the interim head coach in 2011, when head coach Del Nose briefly left the program.

In the years following that stint, Mortensen occasionally appeared at Trapper practices to assist, but never as an official coach. The 2020 campaign marks his first since 2011 as a member of the staff.

Along with his love for the community, the personnel within Northwest’s rodeo program are who keep Mortensen coming back.

“The quality of individuals the program has attracted is amazing. For me, it’s really rewarding to come down here,” Mortensen said. “The reason it’s rewarding is the guys and gals who are here rodeoing.”

When it comes to Mortensen’s coaching, his strategy is simple: preach the basics.

As a young rider, Mortensen attended several clinics, where instructors would stress the sport’s fundamentals for a few days in a row. These early experiences paved the way for his main coaching philosophy.

“Everybody goes through rough patches, but if you have the basics down really well, you can always return to them,” Mortensen said. “The basic things you have to do to have a successful ride is something you pound every day in those situations, and it’s kind of the same thing here. If they do the basics, they’re going to be successful as a rider.”

While Nose is a respected coach in his own right, adding another esteemed figure like Mortensen only increases the staff’s effectiveness.

“It’s simply huge,” Nose said. “He’s very precise and consistent in what he’s telling these guys. Dan’s here getting them through bad habits, setting them in the right direction.

“We work back and forth. When he’s talking to the kids, I don’t say anything,” Nose said. “He’s the man, and he is a genius.”

Mortensen’s presence is also of value for the Trapper student-athletes. In addition to his status as a rodeo legend, he was once in their shoes.

Because of this, Mortensen knows how to convey his teachings to the youthful riders.

“My confidence has improved a lot,” said NWC rodeo team member Cole Biggers. “Just having somebody with that much experience helping and knowing I’m getting the right advice has helped a lot. It sets the bar higher for sure.”

Nose added, “He’s one of the greatest role models. It’s an added value to the whole school system.”

Mortensen has been involved with rodeo since early in his childhood. And he’s stayed with it for his entire life.

Coming back to Northwest and polishing the next generation of riders has given him assurance about the sport’s future.

“I think we have a good team and have in the past have had really good individuals,” Mortensen said. “It gives me a lot of belief that the sport’s in good hands with the individuals who are coming up right now. And it’s programs like this that develop that.”