It’s not been an easy year for farmers.

Fuel prices are soaring. Fertilizer prices are, in some cases, triple what they were a year ago, and inflation is driving up the cost of all the … 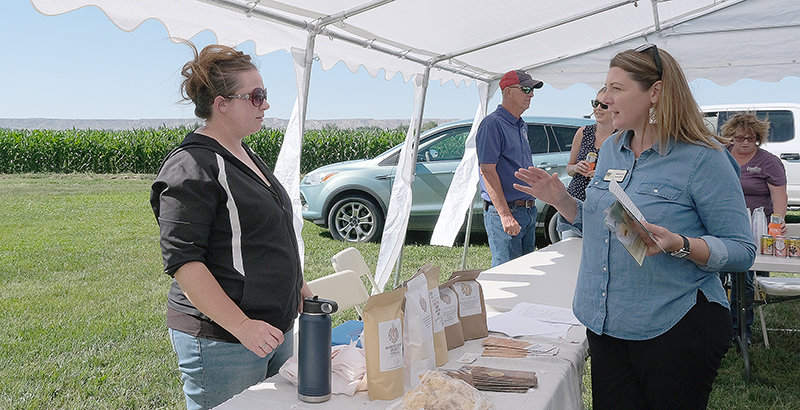 Sara Wood (left), owner of Wyoming Heritage Grains, discusses agriculture with Rebekah Burns, executive director of the Powell Economic Partnership, during the Field Days event in July, at the Powell Research and Extension Center. Wood offered samples of cookies and biscuits made from the heritage grains grown and stone milled on her Heart Mountain farm.
Tribune photo by Kevin Killough
Posted Friday, August 12, 2022 8:20 am
By Kevin Killough

It’s not been an easy year for farmers.

Fuel prices are soaring. Fertilizer prices are, in some cases, triple what they were a year ago, and inflation is driving up the cost of all the materials farmers use to produce their crops.

Some farmers are looking at a different approach to agriculture called regenerative farming, which may reduce costs and improve soil health.

In modern agriculture, a farmer puts down lots of water, some pesticides, and some fertilizers. After all those inputs are purchased and applied, the farmer wants the highest yield possible.

This approach has had an enormous benefit in terms of feeding the planet. In a world that used to be plagued by famines, malnutrition rates are at historic lows, according to data from the UN Food and Agriculture Organization and World Bank.

However, modern farming also has a price. Besides the rising costs of fuel, pesticides, and fertilizers, which is spurring an interest in farming cheaper, there are also those consumers who are growing more interested in where their food comes from, how it’s produced, and the impact it has on the environment.

“A lot of consumers are excited about this concept of regenerative agriculture,” said Caitlin Youngquist, educator with the University of Wyoming Extension Service.

Rather than using pesticides and fertilizers to create an artificial environment for crops to grow, some farmers are using regenerative agriculture to create a balanced ecosystem — one that works with the natural environment rather than against it.  Proponents of this approach say it improves soil health with fewer materials.

In June, Youngquist invited Alejandro Carrillo, a rancher from Chihuahua, Mexico, to speak to Big Horn Basin farmers at a workshop in Hyattville and Ten Sleep about the regenerative approaches he’s taken to improve the soil and grasses on his pastures for his livestock.

The Chihauhaun desert averages 10 inches of precipitation per year and has no irrigation or water rights. The area receives all of its annual rainfall during the summer months, and that moisture has to support growth until the next rainy season.

Photos of the Chihuahuan desert show a barren landscape broken by the occasional mesquite tree or cactus. Yet, not long ago, the area supported wild bison, sheep, antelope, and prairie dogs. Now, much of the rangeland is barren, and the landscape is dotted with more erosion features than large, wild animal life.

Carrillo is attempting to recreate those natural conditions that used to feed a much more diverse ecosystem.

The rancher joined his family’s ranch, Las Damas Ranch, in 2004, and faced the challenges that come with conventional ranching in such an arid place. Seeking a better way to do things, he traveled to Africa, South America, and the United States to learn about regenerative techniques. He began using what he learned in 2006 to adapt a holistic, regenerative way of ranching.

In conventional agriculture, the rancher is always in competition with nature, but Carrillo tries to make it more of a collaboration.

For example, rather than a dozen or so pastures in which the cows graze and return shortly after six months, Carrillo said he has about 300 small paddocks on which the cows feed. These paddocks have up to 10 months of rest before the animals return.

He does no seeding or pesticide spraying to keep his pastures rich. Instead, Carrillo said he uses the insects to improve the condition of the soil. He lets dung beetles go about their business, digging into the soil, creating routes for water to get down deeper — and stay there longer.

“Those are the soil engineers,” Carrillo explained. “That’s what it means to work with nature.”

The beetles, along with termites, he said, also help with mitigating mesquite trees, which suck up a lot of water. Fed upon by the bugs, the trees dry out and collapse. The termites also improve nitrogen in the soil.

Carrillo grazes multiple types of animals on his ranch, such as donkeys, which eat some of the forage cows won’t.

“Why force one kind of animal to do the whole thing? In nature, that doesn’t really happen,” Carrillo said.

During his presentation, Carrillo showed photos of grasses on his ranch next to a fence that separated his land from his neighbor’s, who is still using conventional techniques. Carrilo’s land is blooming with grasses, which end at the fence. Across the fence on his neighbor’s land is a dry, hard landscape broken up by a few scrub brushes.

The photo was taken during the spring just prior to the rainy season, and the grasses on Carrillo’s land still show a bit of green after being moisture deprived since the previous summer.

Unlike the top-hard soil seen on the ranches using conventional methods, Carrillo said his soil is softer and wetter.

“If you don’t have a landscape that you like … that’s because of your management. But that can change,” he said.

Up on Heart Mountain, Sara Wood has been using regenerative farming techniques for about three years to improve the health of the soil on her farm. Like Carrillo, the Woods don’t use pesticides or fertilizers in their operation.  She said it’s working.

“The soil is healing,” Wood said.

She plants cover crops, which she said help retain the moisture in the soil as well as its temperature. Various crops can be used as cover crops including alfalfa, rye, clovers, and buckwheat. After harvesting, these crops are left on the ground to provide a biomass cover.

The cover crops keep the heat off the soil in the summer, and they also protect the primary crop from frost damage. She said some frost sensitive crops survived some cold days because the cover crop was like a blanket that kept the soil warm.

During the summer, when the leaves on sugar beets wilt in the afternoon sun, Wood said tests show that the soil on her regenerative fields is 30 degrees cooler than the ambient temperature.

Wood said the fields have a lot of insects. She often has to take pictures and research to figure out what they are, but she is seeing a lot of beneficial, predatory insects like wasps, which dine on the types of insects that destroy crops.

“It’s just a lot of diversity,” she said. “It’s been literally wild.”

The wild farm does require its share of tending.

The Woods weren’t seeing germination as fast as they wanted, for example, and some tests on soil samples revealed it was necessary for them to inoculate the crops with mycorrhizal fungi.

The fungus increases the level of nutrients the plants receive, partly by drawing nutrients from the soil more efficiently than plant roots.

“So they’re balancing each other out,” Wood explained, which is saving the family money on fertilizer.

Youngquist said regenerative farming is getting more attention from consumers, in part due to articles in the popular press, documentaries and celebrity advocacy. The amount of information online is growing. Some of it is accurate and useful, Youngquist said, and some isn’t.

“Some of it is in the same category as hype,” she said.

A growing consumer interest — whether driven by accurate information or not — creates a market for producers. People are willing to pay more for products they perceive as healthier and better for the environment.