A new manager, limited players returning from a strong 2021 squad and a slow start had the Powell Pioneers searching for answers early in the season. A midseason turnaround helped the Pioneers finish … 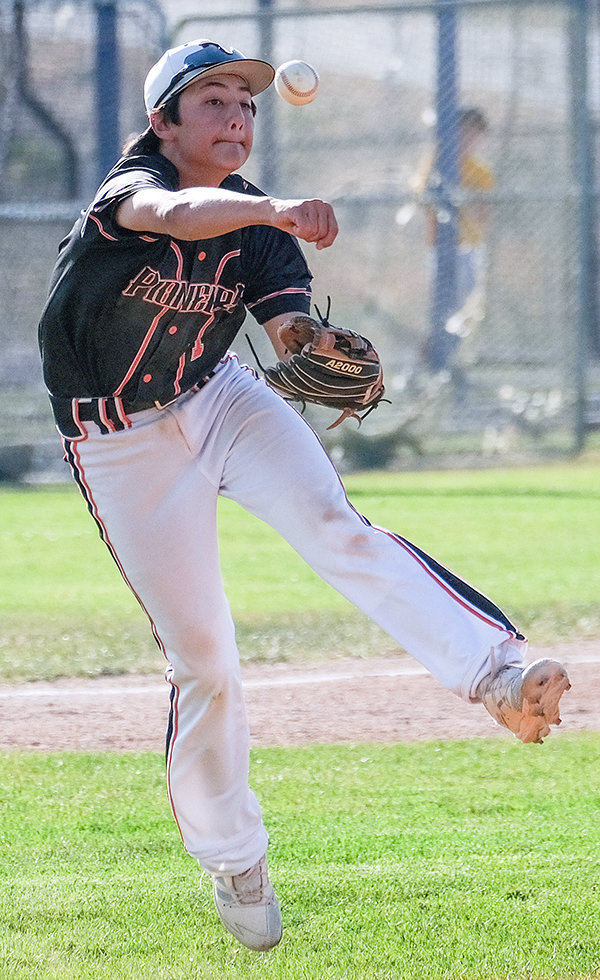 Ethan Welch fields a pitch and throws it to first base during the Pioneers final game against Cody on Thursday.
Tribune photo by Seth Romsa

The Pioneers finished up the season on Thursday after a strong second half campaign came up short at the state tournament.
Tribune photo by Seth Romsa 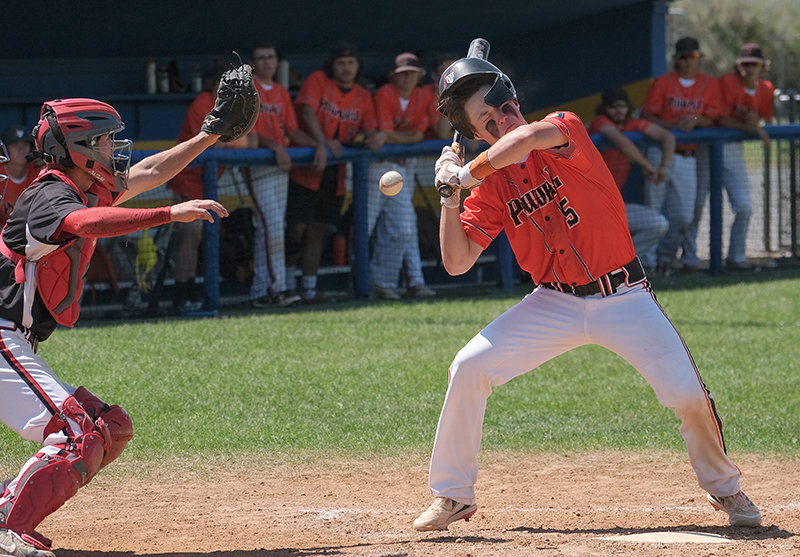 Jhett Schwahn reacts after being hit in the helmet by a fastball during the Pioneers game against Lovell. Schwahn’s helmet was broken, but he was able to continue with no injuries.
Tribune photo by Seth Romsa
Previous Next
Posted Tuesday, August 2, 2022 8:20 am
By Seth Romsa

A new manager, limited players returning from a strong 2021 squad and a slow start had the Powell Pioneers searching for answers early in the season. A midseason turnaround helped the Pioneers finish the season strong — defeating Lovell 11-7, but losing to Cody 16-3 in the A State Tournament on Thursday.

Following a heartbreaking loss on Tuesday night, the Pioneers’ (34-22-1 overall) backs were against the wall on Wednesday in a win-or-go-home game against A Northwest foe Lovell (29-21 overall).

Powell started slow, gaining no baserunners in the top half of the first inning.

Lovell took advantage, scoring on an error by the Pioneers to make it 1-0.

The early rust did not last long for Powell.

Trey Stenerson walked to lead off the inning but was caught stealing second for the first out.

A flyout by Cole Fauskee gave Powell two outs, but the Pioneers were about to get started.

A Jacob Gibson walk in the second inning loaded the bases, and Ethan Welch hit a double to left field, bringing around two Pioneers.

Johnson advanced to third on an error, and was driven in on a Jhett Schwahn double.

Schwahn was brought in on a single by Cade Queen, and the Pioneer scoring for that inning ended there to give Powell a 6-1 lead.

Lovell had an answer in the bottom half of the inning.

A hit batter and a single gave the Mustangs two baserunners, who were driven in to cut the lead down to 6-4.

The Pioneer offense started to slow down, and the Mustangs continued to chip away at the lead.

Lovell got one run in both the fourth and fifth innings, tying the score 6-6.

After several slow innings, Powell got another strong offensive inning in the sixth.

A Gibson walk led off the inning, and an error on Welch’s at bat gave Powell two runners on with no outs.

A bunt by Johnson into a fielder’s choice maintained runners at first and second, and Schwahn was hit by a pitch to load the bases with one out.

A double by Queen drove in two, and a single by Stenerson drove in another.

Wantulok finished off the scoring for Powell after a double drove in Queen and Stenerson to make it 11-6.

Lovell brought in one run in the bottom half of the sixth, cutting the lead to 11-7.

Powell did not score in the top of the seventh, but was able to hold off the late push by Lovell and advance in the consolation bracket to matchup with the host Cody Cubs (35-19-1 overall).

After surviving a late scare on Wednesday, the Pioneers advanced to another win-or-go-home matchup against the rival Cubs.

In a game where Powell needed a fast start, the Pioneers got one.

A single by Johnson followed by Schwahn and Queen walks loaded the bases with no outs in the top of the first inning.

In the bottom half of the first inning, an inconsistent strike zone mixed with errors helped Cody get back in the contest immediately — taking a 4-2 lead after the first inning.

The Pioneer offense stalled, but the Cody offense continued to roll along.

Powell errors and strong baserunning by the Cubs allowed Cody to score three in the second and seven in the third inning to push the lead out to 14-2.

“Nothing went right,” Borders said. “We did not play well, but we did not get any breaks whatsoever.”

Cody again pushed the initiative in the fourth inning, adding another pair of runs — expanding the lead further out to 16-2.

The Pioneers finished with six hits compared to Cody’s 11, but it was the nine errors that sealed Powell’s fate compared to the Cub’s one error.

“It seemed like we had two of our worst games of the year this week,” Borders said.

Despite the loss to Cody and failing to advance to the Northwest Class ‘A’ Regional Tournament in Utah, Borders felt like the season overall was a success for the young Pioneer team.

“I felt like it was a successful season.  They played well for most of the year and grew a lot,” Borders said. “We won a lot of baseball games.”

Throughout the season, the Pioneers battled adversity, running into different obstacles which included a number of injuries.

Powell is expected to return all but one player in Keaton Rowton, who will graduate, and it will bring back a squad next year that featured nearly all sophomores who are heading into their junior year.

Borders expects that as the players continue to grow stronger and compete in sports for the Powell Panthers, they will continue to improve for the Pioneers next year.

“Another year of these guys leading at varsity sports is going to be huge,” Borders said.

He said he hopes to continue to improve his bullpen, as the loss on Tuesday to Casper during the state tournament revealed the need to continue developing a quality bullpen with more arms.

He said he hopes to create a difficult schedule early in the year again next year to challenge the team and to find a way to help the Pioneers push to the state championship.