Julie Meachen, assistant professor of anatomy at Des Moines University, has been returning to the cave every summer for the past four years, studying the creatures that plummeted to untimely deaths. The 30 feet of bones and fossils at the bottom of … 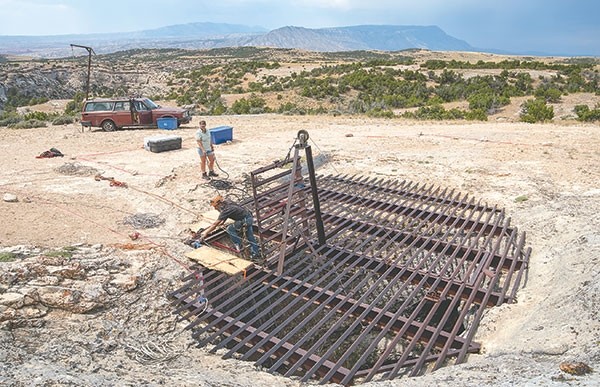 Natural Trap Cave climbing instructor and cave safety chief Juan Laden and Laura Vietti of the University of Wyoming work to secure equipment at the entrance to the cave.
Tribune photo by Mark Davis 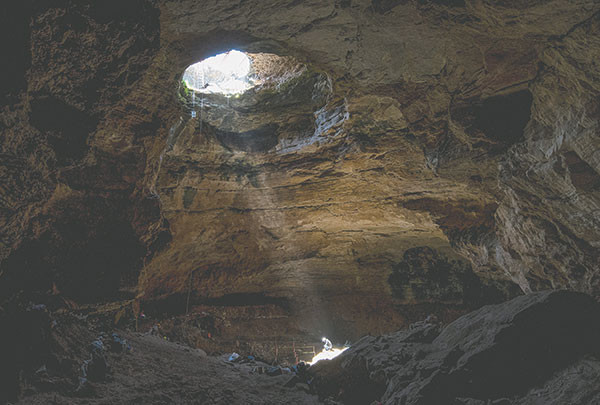 A beam of light illuminates a researcher at the base of the Natural Trap Cave near Lovell. The cave will be closed, possibly for decades, after the research staff of Julie Meachen finishes its work Saturday. Photo courtesy Justin Sipla 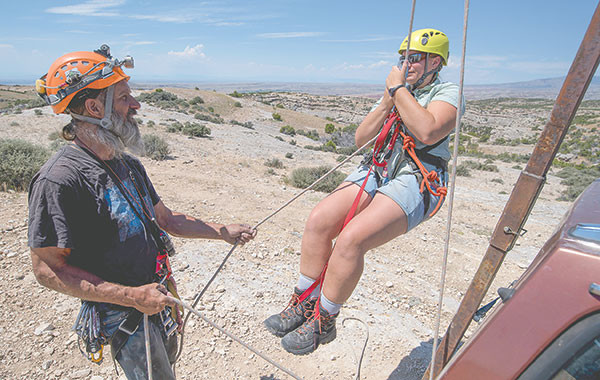 Laura Vietti, of the University of Wyoming, certifies under the guidance of climbing instructor Juan Laden of Lander before getting a chance to go into Natural Trap Cave. Tribune photo by Mark Davis 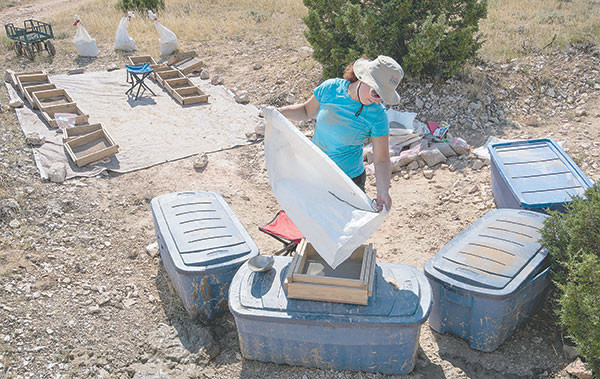 Julie Meachen prepares to work through bags of gravel, looking for specimens in the sift processing area above ground. All water and supplies used in the camp had to be brought in on a treacherous road to the research camp high above the Bighorn Canyon National Recreation Area. Tribune photo by Mark Davis 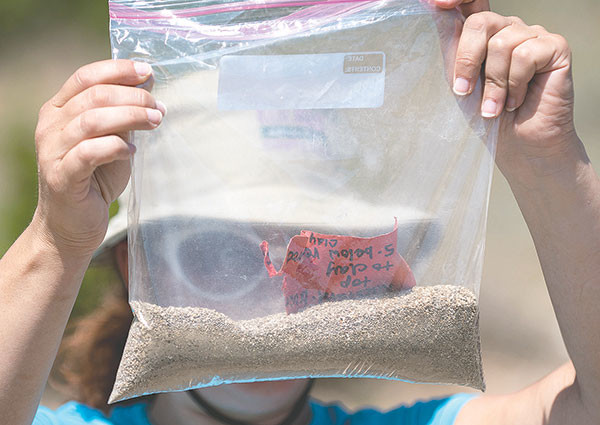 Julie Meachen looks through a bag of tiny gravel for small specimens. Specimens as small as plant particles and even pollen are highly sought after in the research project. Tribune photo by Mark Davis
Previous Next
Posted Thursday, July 20, 2017 2:49 pm
By Mark Davis

The final specimens have been removed and the huge iron gate on Wyoming’s nationally renowned Natural Trap Cave will be securely locked on Saturday — possibly for decades.

Julie Meachen, assistant professor of anatomy at Des Moines University, has been returning to the cave every summer for the past four years, studying the creatures that plummeted to untimely deaths. The 30 feet of bones and fossils at the bottom of the cave, dating back more than 100,000 years, have been the subject of many studies since it was first excavated in 1973, Meachen says. But this is the last study — at least for a while.

When Meachen started her project in 2014, it had been more than 30 years since researchers had descended into the cave. The process to gain access from the U.S. Bureau of Land Management takes multiple years and includes stipulations that previous researchers indirectly caused.

The natural feature — essentially a large hole on ground level leading to a bell-shaped cave — has collected creatures since the ice age in a tragic scene playing over and over. Creatures, going about their normal day-to-day business, fall through the hole and either die on impact at the bottom of the 85-foot drop or survive the fall and starve to death in the void.

The cave, which stays at a crisp 40 degrees on even the hottest summer days, has provided scientists with a well-preserved timeline reaching back into the Pleistocene Epoch of prehistoric life in northwest Wyoming. Large, unfortunate mammals such as mammoth, stilt-legged and cavelline horses, camel, short-faced bears (which weigh more than a ton), bison, cheetahs, American lions, wolves, coyotes, wolverines, weasels and foxes have all met their demise in the cave.

“It’s one of the best sites for mammal paleontology in North America. It’s just an amazing site,” Meachen said.

Meachen specializes in carnivores, and this trap cave — located about 10 miles north of U.S. Highway 14-A on a treacherous rutted and rocky road — has a higher abundance of meat eaters than most trap caves, which typically feature more herbivores.

As the team made one of their final pushes to uncover evidence, before returning the dirt to the site and closing the gate, they discovered the jaw of a bison, one of the largest specimens they have recovered in the final year of the project.

They’ve also found many small specimens — not just small mammals like bunnies and rodents, or reptiles like snakes and lizards, but specimens as small as a single grain of pollen.

“We realized we could get pollen from this site, which are really helpful in reconstructing paleo habitat and climate,” Meachen said. “We’ve done some preliminary analysis that looks pretty good. We should get a fine-enough resolution to see how the plants changed every couple hundred or thousand years through the ice age.”

Previous projects were unable to do well with such small finds. But research techniques have changed in the past 30 years. Meachen’s team also has collected DNA samples, but consciously left much of the ground unturned for future exploration.

“They weren’t able to test DNA in the ’70s. Look how far we’ve come since then, and think about how much further DNA research will have progressed 30 years from now,” she said on one of her few days above ground during her field work.

While on top, Meachen sifts through bags of soil like she’s panning for gold, looking for the smallest specimens. It’s dirty work, but the crew leaves no stone unturned — even if it’s a tiny pebble.

After remediation of the cave is finished on Saturday (restoring the cave to the way they found it and marking their progress for future researchers) Meachen and her team will return to the lab and begin analyzing the specimens and data. The work will take at least a couple years to finish.

“We could have it done pretty fast, but we all have day jobs,” Meachen said.

Meachen teaches gross anatomy at Des Moines University in Iowa and her partner, John Logsdon, is a biology professor at the University of Iowa. Many researchers and assistants played important parts in the research, the vast majority of them volunteers.

Logsdon has discovered several exciting finds on the floor of the cave, including a large carnivore paw. But on this day, he and the team found an intact jaw of a bison. Although only a few thousand years old, the size of the find has that fun factor that draws attention to research.

“This is a find that will wow people. It wowed everybody in the cave today,” Logsdon said.

Despite being from Iowa universities, the researchers won’t be going home with much of the collection, said Laura Vietti, University of Wyoming geological Museum and Collections manager.

“This is one of the first major collections to stay in Wyoming for the past two or three decades,” Vietti said.

The specimens are federally owned, but the University of Wyoming will be the repository for most of the research. The facility already features a display on the pollen research.

“We’ll be caring for them indefinitely,” she said.

On her first day in camp, Vietti received safety training for her round trip into and out of the cave. Just getting to camp was a hardship.

“My truck broke down three times on the way up here,” Vietti said.

Climbing and rapelling training is a physical and mental challenge — one that follows strict safety standards. The training and certification took place above ground in the blistering heat. But the first step off the edge, knowing that thousands of animals have died on that first step over the past thousands of years, is one of the hardest parts of the adventure to overcome.

Once back in Laramie, Vietti plans to use new technology to make it easy for museum visitors to share her experience.

Closing the project is bittersweet for the research team. While the work is hard and the working conditions are dangerous, the team grew tight living and working in the challenging environment. They’ve become like family, Meachen said.

She does look forward to taking her first summer vacation in several years. Meachen hopes to ride RAGBRAI, a seven-day bike ride across the state of Iowa, next summer before deciding whether to seek further funding for another trip back to the cave. After representatives from the BLM do their post-research check of the cave, it will return to the bats and mice that call the cave home — and the occasional unfortunate creature that falls through spaces in the gate.