Patty Paulsen has always worked in health care, working as a CNA in a nursing home and in home health care. But as soon as she began working with people with developmental disabilities 17 years ago … 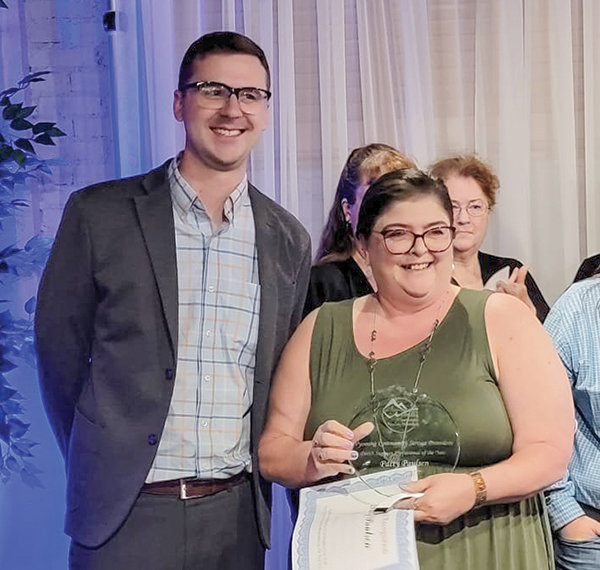 Patty Paulsen has always worked in health care, working as a CNA in a nursing home and in home health care. But as soon as she began working with people with developmental disabilities 17 years ago at Big Horn Enterprises, she said she knew she had found the job God had meant her to do.

“I just instantly took to it and there's no job like it,” she said. “You know, I love teaching them things. And then to see when they accomplish that goal. That look on their face is just priceless. It's hard to describe the feeling.

“I honestly feel that I make a difference.”

Her colleagues locally and around the state agree. Recently she was recognized as Wyoming’s Direct Service Professional of the Year at the Wyoming Community Service Providers statewide recognition banquet.

“I’m overwhelmed, because I've never had anything like that happen,” she said. “I mean there's a lot of providers in the state of Wyoming and to be named provider of the year is pretty special.”

She is the lead supervisor for the Powell operation’s residential department and said it was nice for someone from the residential side to get such an honor amidst all of the other, bigger organizations in the state.

Paulsen’s supervisor, Leif Ohman, nominated her for the award and mentioned many of her attributes.

“Among the thing Patty does to advocate and champion our participants, two things stand out most,” he wrote. “She truly makes it a priority to know what their aspirations are and creates opportunities to realize them … Patty also encourages the participants to utilize their independence as much as possible.”

Paulsen stressed the importance of knowing the dreams and aspirations of the people she works with in the two group homes and the day habitation center in Powell. One woman wanted to learn more about money and cooking, so Paulsen started taking her to the American Legion on event nights to help run the concessions and prepare food. The week after Paulsen received the award, she got to see the women, for the first time, make an order and take money, returning the correct change.

Paulsen also volunteers with the American Legion delivering food in town. One day a couple of years ago, she and a fellow volunteer performed CPR on a man and saved his life, leading to her and the other volunteer receiving recognition from the city of Powell.

For Paulsen, making the lives of better for those around her is, and has always been, her goal. She recalled someone she had worked with a few years ago whose dream was to get a picture taken with professional wrestler Roman Reigns.

“Her mom and I were just pondering, you know, ‘how can we get this done?’” she said.

Then the woman she was working with got sick, and Paulsen and the woman’s mother acted, acquiring a Fathead poster of Reigns.

“I held her up next to that poster and stood back as far as I could so her mom could just get her and Roman in the picture,” Paulsen recalled. “And she looked up at him, and you would have thought that it was actually him. The look on her face. Less than a month later, she passed. But I always have that memory and I'll never forget that look on her face.”