Just after lunch, dark clouds moved in overhead and a cold rain began to fall. The storm was expected, but the crew couldn’t see it approaching at Dead Indian Campground — far below the … 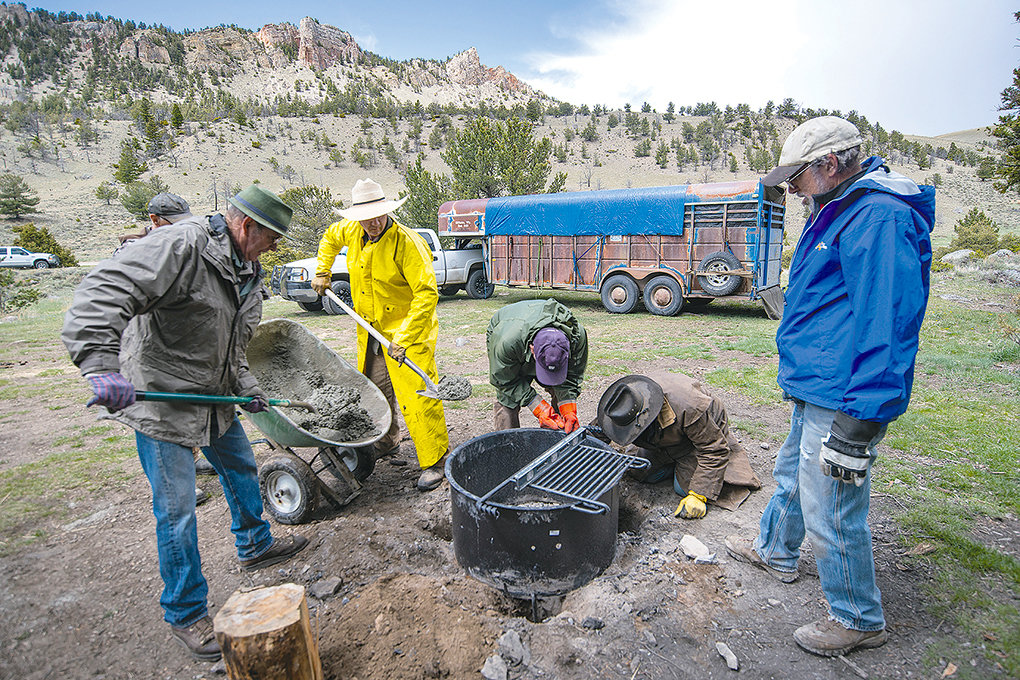 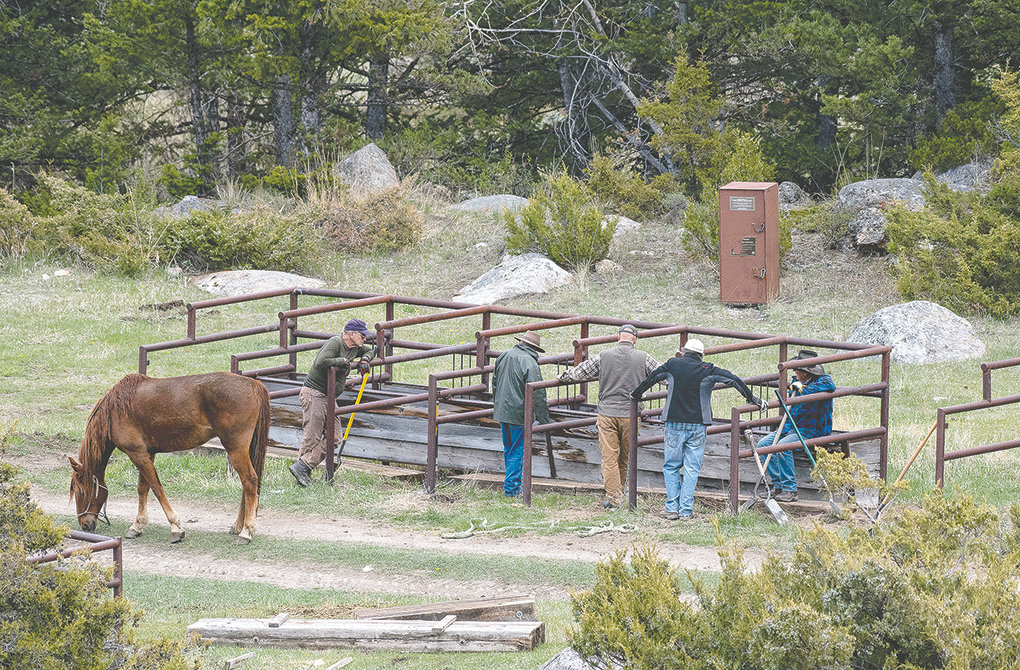 Walter Haslett, Howard Sanders, Bruce Fauske, Bud Melcher and Dale Olson install a floor for stanchions at Dead Indian Campground. The local chapter of the Back Country Horsemen of America clears scores of miles of trail and performs other work in the Shoshone National Forest each year.
Tribune photo by Mark Davis
Previous Next
Posted Tuesday, May 26, 2020 8:20 am
By Mark Davis

Just after lunch, dark clouds moved in overhead and a cold rain began to fall. The storm was expected, but the crew couldn’t see it approaching at Dead Indian Campground — far below the surrounding peaks. It wasn’t welcome, but the crew was undeterred.

The work marked the beginning of a new season of hard labor, mixed with laughs, for the Shoshone Chapter of the Back Country Horsemen of America. Members from across the Big Horn Basin and southern Montana come together several times a year to maintain trails and trailheads in the Shoshone National Forest. It’s an endless, all-volunteer effort to keep trails open and provide comfort and convenience to those who frequent facilities in northwest Wyoming’s mountains.

Just after sun-up, they had installed four new fire rings at the North Crandall trailhead, in the Sunlight District. The heavy duty fire rings were purchased by the club and carry a club brand, done by a club member with welding equipment, in case someone tries to steal them. It would be a chore to take; each is secured by several large steel pins locked into place with concrete.

The back country group also reclaimed 30-foot-long timbers, cutting them into transportable-sized sections to build stanchion floors at Dead Indian. Over the years, horses have beaten the floors down until they dissolved into the earth, said project manager and Powell-area resident Frank Fagan.

“We cut them down, recycled them, put a bolt through them and welded them back together so we could repurpose them back to this trail head,” Fagan said.

It took a tractor and four men to move the new floors into place. But first they had to dig out the area below the heavy duty horse stanchions by hand. The moisture may have softened the soil a little, but the close quarters and work with spades was still hard on the back. Many of the jobs the group accomplishes are done deep in the hills. They spend days in the saddle removing fallen trees, fixing washouts, clearing bushes and overhanging limbs, removing old fences and marking trails.

This chapter is the busiest in the U.S. The well-seasoned volunteers have cleared thousands of miles of trails in the Shoshone one obstruction at a time. Their contract with the Forest Service is to clear 100 miles a year, but they often do an extra 50 miles — and have more than once doubled their contracted yearly total.

The Forest Service provides funds to the club for their work. They also receive donations from supporters. Yet all the money brought in by the club is spent building corrals, refurbishing infrastructure and buying tools for the work.

“We don’t use any of the [donations] getting out here,” Fagan recently explained. “The care of the horses, our tack, and our gas and expenses is on us.”

The work continues this year despite worries about the pandemic.

“We have to watch our group size, but usually we don’t have that many people on a ride,” said chapter president Dale Olson.

More than 20 volunteers added their names to the crew list for the May 15 mission — too many for what was needed. To be safe, Fagan asked some to wait to volunteer for other projects later in the year.

It’s rare that there are too many volunteers, Olson said, but after being locked down, folks want to get out as the seasons change. The back country group is dealing with other logistical issues due to the new normal. A delay in the delivery of materials for their next project near Cabin Creek might push back the schedule a bit.

Despite the challenges of the pandemic, the horsemen are still actively looking for new members.

(Editor's note: This story has been corrected to reflect that the group's annual statewide Rendezvous has not been canceled.)