As the Powell High School track team took to the field last week, coaches and students immediately went to work, but a cancellation of at least a part of the season due to concerns about the … 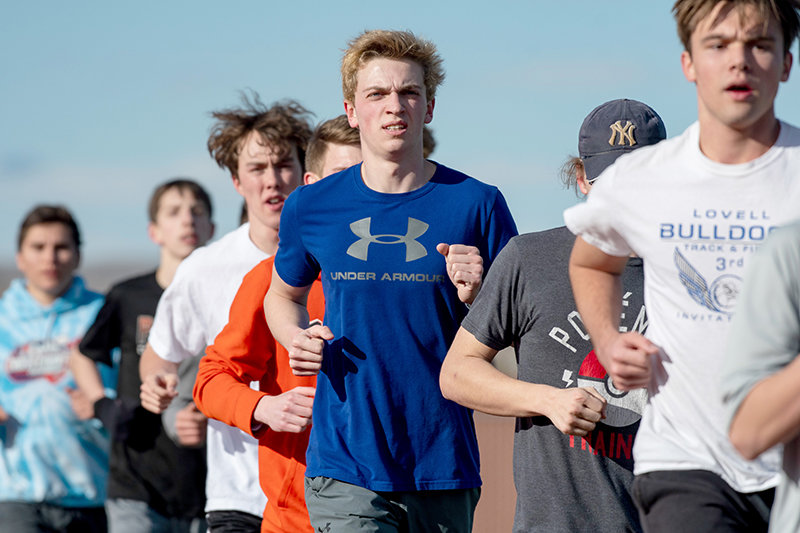 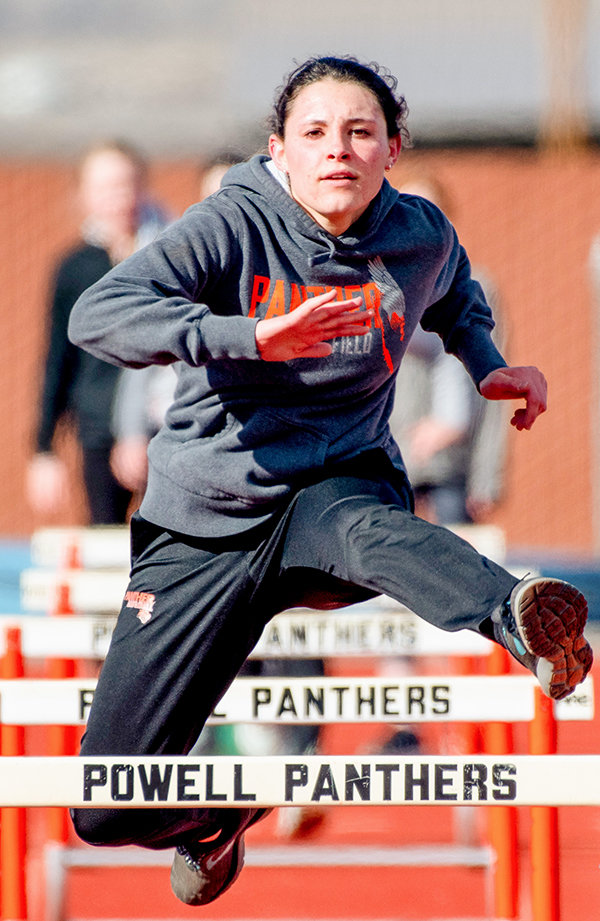 PHS senior Sabrina Shoopman leaps over a hurdle. The entire spring sports season is in jeopardy due to COVID-19.
Tribune photo by Mark Davis
Previous Next
Posted Thursday, March 19, 2020 8:10 am
By Mark Davis

As the Powell High School track team took to the field last week, coaches and students immediately went to work, but a cancellation of at least a part of the season due to concerns about the coronavirus were in the back of their minds.

More than 100 students joined the track team this year, all working for the season opening meet on March 28 against Cody, the Panther’s cross-county yet “friendly” rival. Defending 400 and 800 meter state champion Jay Cox was trying to remain optimistic and trained hard through the session with distance runners.

“Even if they cancel the season, it won’t be the end of my track career because I’ll be running track in college,” he said.

Cox was planning a ceremonial letter of intent signing with the University of Wyoming on March 25. The senior entered this season in the best shape of his life. He was sick for a portion of the 2019 swim season, which affected his conditioning the following track season.

Cox remained healthy all season and refused to take a conditioning break between swimming and track. His time of 1:59.68 seconds in the 800 was the best overall time at the 2019 state track meet, earning him a “best of the best” award. This year he hoped to repeat as state champion in both the 400 and 800, and he’s hoping to break the PHS school record at the Wes Pinney’s 1984 Wyoming State Track meet with a 1:57.63.

“Our family has been involved in the race for quite some time,” Chris said.

But Jay is faster than Chris ever was, the father confessed. And the entire family has been looking forward to witnessing Jay’s senior year performances.

“We’re heartbroken,” Chris said about the season possibly ending due to the pandemic. “But there are bigger things at play here.”

On Monday the season was officially postponed until at least April 3. It’s possible that the entire season will be canceled.

Should there be a track season this year, Jay Cox will be ready. Despite not having organized practice, he is continuing to run. PHS head coach Scott Smith hopes the season can be salvaged. “I think that things will blow over,” Smith said before the school closed.

Both the Powell girls and boys are stacked with talent, said Smith. Dylan Preator is defending state champion in triple jump and took second in the indoor meet. And then Brody Karhu was second in the pole vault last year. “And he’s an all-around good sprinter,” Smith said. “He placed in the 200 and the 400 and ran the 4x400.”

“I mean, it looked like she had the pole vault last year. Two girls made 10’6” on their last jump, or she’d have been the state champion,” Smith said.

Smith also said Jenny Hillman was a team leader this year after placing in the 100, 200 and earning All State honors in the 400.

Assistant Coach Cliff Boos said uncertainty about the future means learning to “appreciate every moment” is important in times like these.

“It’s unchartered territory. I want to see how each day plays out, because every day you see something new you never would’ve imagined. Right?” Boos said. “It just gets more and more complicated, more profound, and dramatic.”