With the arrival of cooler temperatures and more rain, local land managers are lifting fire restrictions. 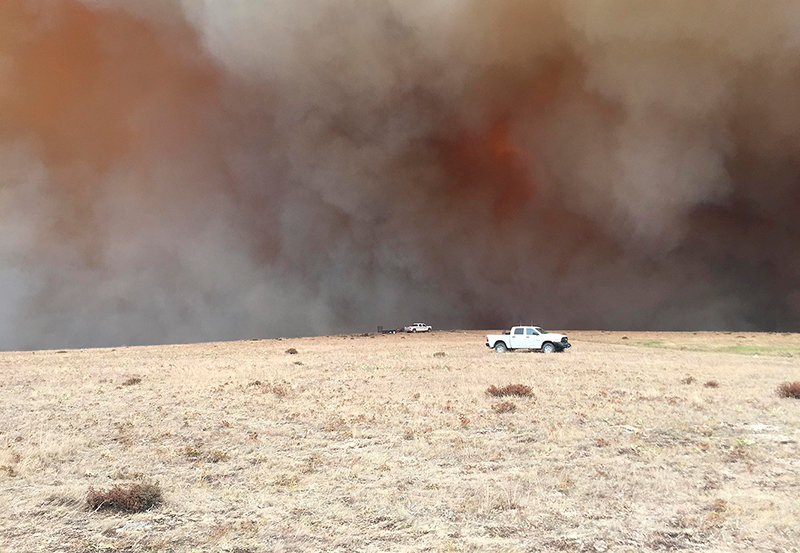 The Crater Ridge Fire burns across the Bighorn National Forest in August. With conditions dry and hot, fire managers feared a slew of large wildfires, but so far, the Crater Ridge Fire has been one of the only blazes in the region that reached thousands of acres.
Courtesy photo 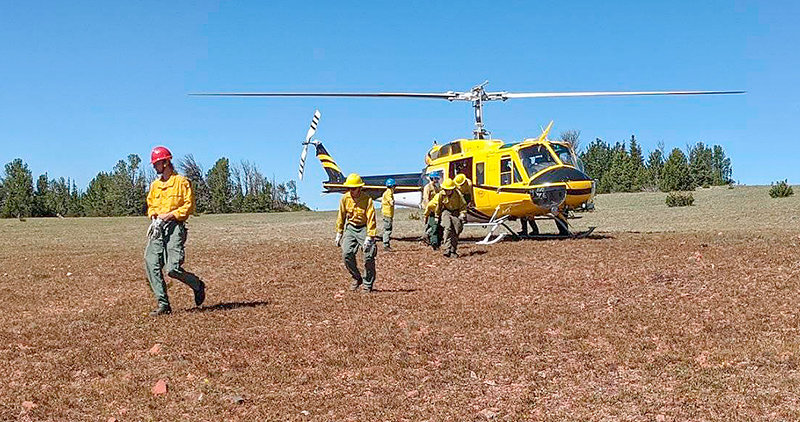 Firefighters exit a helicopter near the Robertson Draw Fire south of Red Lodge. The fire is currently listed as 95% contained with 10 people continuing to work the blaze.
Courtesy photo
Previous Next
Posted Thursday, September 2, 2021 8:20 am
By CJ Baker

With the arrival of cooler temperatures and more rain, local land managers are lifting fire restrictions.

The Shoshone National Forest and the Bureau of Land Management recently removed fire bans and Park County commissioners will likely do the same next week.

“Even though we may still have some warm dry weather left before winter, we will probably not return to the extreme conditions that prompted the fire closures,” Parker wrote in a letter.

Park County commissioners will consider lifting the fire ban — which prohibited all outdoor open fires unless they met one of several exceptions — at Tuesday’s meeting.

When they first implemented the ban in July, the weather was hot, vegetation was dry and the Robertson Draw Fire had just ripped across about 30,000 acres between Clark and Red Lodge, Montana, destroying multiple cabins. Going against Parker’s advice, commissioners waited until after the Fourth of July to ban fireworks and other open fires. It wound up being a relatively quiet holiday for local firefighters and, despite spending a number of days in “extreme” fire danger, only one other substantial fire — the Crater Ridge Fire in the Bighorn Mountains — broke out in the region in July and August.

“We were very fortunate this summer that we didn’t have anything that got out of hand that the local fire departments and the federal agencies couldn’t get under control,” Parker said.

The Robertson Draw Fire south of Red Lodge — reportedly started by a motorbiker who spilled and ignited gasoline while riding off-trail — is now 95% contained, with 10 people continuing to work the fire.

Minimal growth is expected in the coming days, while engines “will continue patrolling the fire perimeter and a lookout will be posted to monitor for fire activity,” fire managers said in an update. “Rehabilitation will be a strong focus in the next coming weeks.”

It’s expected to last until a season-ending rain or snow.

As for the Crater Ridge Fire, it continues to burn in the Bighorn National Forest. It had burned through more than 6,250 acres as of Wednesday, with 132 personnel working to contain the blaze. Containment stood at 52% Wednesday. Some flare-ups were spotted on the north side of the fire on Tuesday, as higher temperatures and lower relative humidity led to hot spots. Still, an infrared flight conducted Tuesday shows “a significant reduction in heat signatures over the fire area” as compared to a week earlier. Stage 1 fire restrictions remain in place in Sheridan County, where the fire is located.

However, the improving conditions led Shoshone National Forest leaders to lift fire restrictions on Aug. 25 and the Bureau of Land Management lifted fire restrictions on all of its public lands in Park, Big Horn, Hot Springs, Washakie, Carbon, Fremont, Natrona and Sweetwater counties on Tuesday.

“Due to cooler temperatures and increased moisture, fire danger has decreased across the district, allowing us to safely lift fire restrictions,” said Brent Meisinger, BLM Wind River/Bighorn Basin District fire management officer. “But please remember as you’re out recreating and hunting on public lands, continue to remain vigilant, completely extinguish your campfire before leaving it and keep wildfire prevention in mind.”

Meisinger thanked public land users for their cooperation and vigilance.

“Without your adherence to the fire restrictions, it’s likely there would have been more fires,” he said.

The public now is free to build a campfire, smoke, operate a chainsaw or use an arc or gas welder on BLM-administered public lands. However, it remains illegal to use fireworks or incendiary/tracer ammunition, to burn or ignite tires, wires, magnesium, or other hazardous or explosive material; or to operate an off-road vehicle without a properly installed spark arrester.

The BLM’s Wind River/Bighorn Basin District originally issued the Stage 1 Fire Restrictions on June 30. The Shoshone’s restrictions had been in place from June 25. However, moisture content in the forest’s vegetation rose to non-critical levels after 1 to 2 inches of rain and snow fell in the latter part of August.

“We want to thank all visitors to the Shoshone National Forest for taking the time to know what fire restrictions were in place and to abide by those restrictions over the past two months,” Shoshone Supervisor Lisa Timchak said in a statement. “Thankfully our conditions have changed, and we are now at a place where we can safely lift fire restrictions.”

Forest officials noted that long range forecasts are still calling for a warming and drying trend into the fall.

“Please continue to take care as you decide to build any campfires you may have by ensuring you build them in a rock or metal fire ring away from low-hanging tree branches and dry grasses,” the Forest Service said in a release, “and drown the campfire with water before you walk away.”

The BLM noted that disobeying fire restrictions on federal lands can be punished with criminal charges — and that those found responsible for starting a wildfire will also face restitution costs for suppressing the fire.

“It is important we all do our part to prevent unnecessary risks of wildfire starts,” the agency said.