Sally Montoya passes, leaving a legacy of love in her wake

Memorialized as the Mother Teresa of Park County and known by many as the Angel of Powell, Sally Montoya died Tuesday morning, the day before her 92nd birthday.

“Sally got her wings …

Sally Montoya passes, leaving a legacy of love in her wake 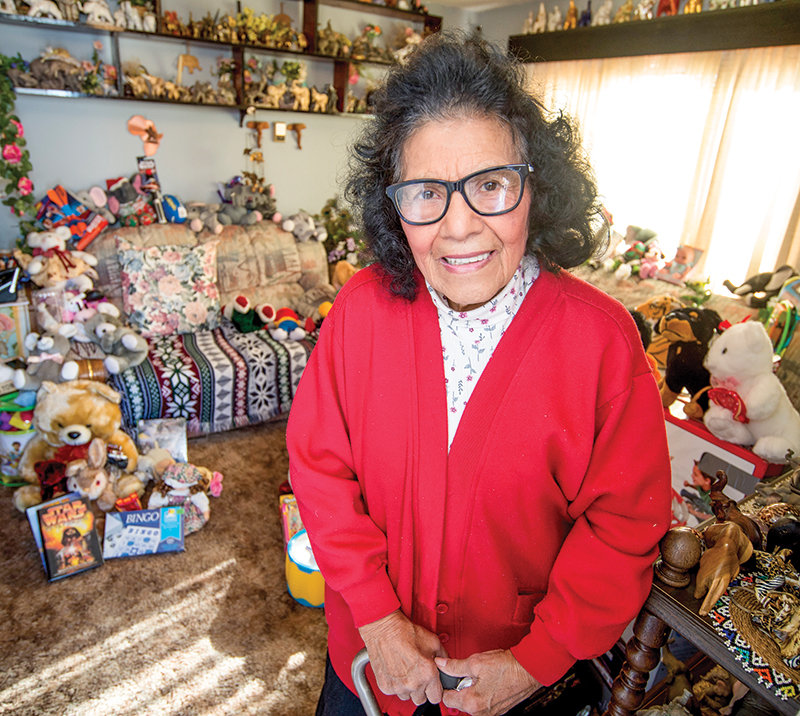 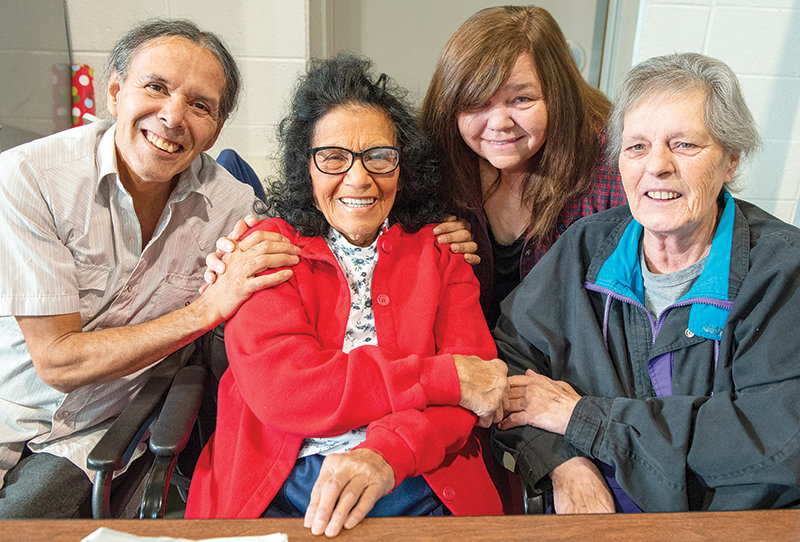 Michael Montoya, Neva ‘Keebler’ Slaght and Ilene Andreen, all longtime volunteers, surround Sally Montoya prior to the distribution of Christmas meal baskets and Toys for Tots in the final year of Montoya’s participation in the program after 70 years as a volunteer and leader. Montoya died early Tuesday.
Tribune photo by Mark Davis 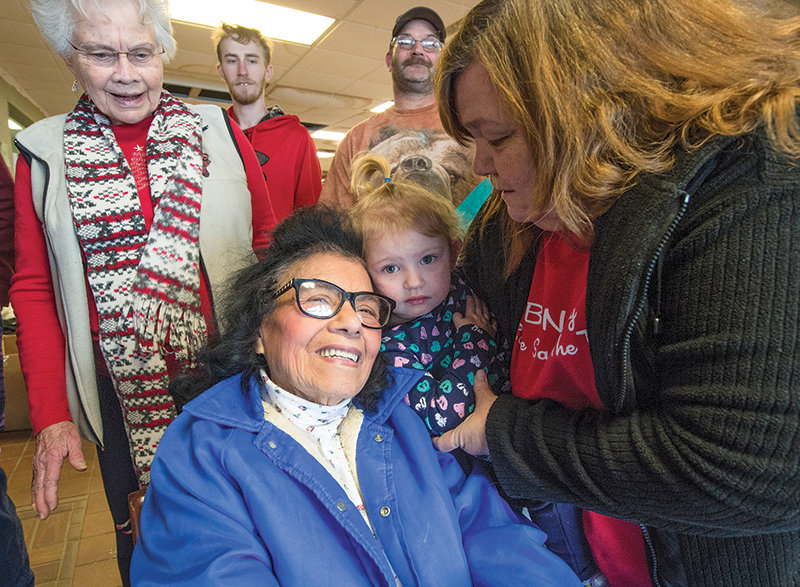 Sally Montoya is surrounded by a few of more than 20 volunteers who spent their Christmas at Sally’s Boutique, including Neva Slaght (far right) and her granddaughter, Henley. This was the last year the boutique operated.
Tribune photo by Mark Davis 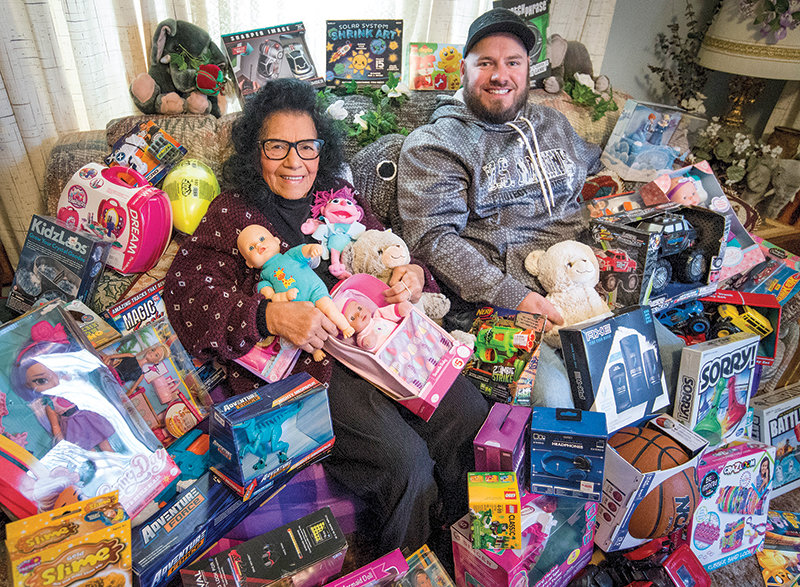 Sally Montoya and Nick Martin, a former area campaign coordinator for Toys for Tots, sat with toys destined to surprise children on Christmas morning in 2018.
Tribune photo by Mark Davis
Previous Next
Posted Thursday, June 30, 2022 8:25 am

She helped so many people. So many children. So many families. From food, to clothing and furniture — everything that a person would need.”
Michael Montoya
By Mark Davis

Memorialized as the Mother Teresa of Park County and known by many as the Angel of Powell, Sally Montoya died Tuesday morning, the day before her 92nd birthday.

Montoya dedicated her life to helping anyone who needed a helping hand, spending 70 years volunteering her time as the leader of Powell’s Christmas Basket program, as well as leading Girl Scouts for 25 years and Cub Scouts for five years. In her spare time she made hundreds of quilts, donating them to families in need of comfort. She also ran Sally’s Boutique, which offered free clothing and home furnishings to those visiting during the Christmas season.

“She was amazing. If anyone could turn 24 hours into 48 hours, she’s the one that could do it,” said her son, Michael.

Montoya worked as a teacher’s aide for 29 years, always looking for opportunities to be a positive influence in the lives of children. No matter what else she was doing, if someone needed help she would drop everything and offer her assistance.

Former U.S. Sen. Alan Simpson said she helped more people than “any of us.” He was among those she helped, he said.

“She saved my butt,” Simpson said, referring to assistance she gave freely while he worked to improve the lives of migrant agricultural laborers. “Sally went with me to the fields,” he said.

“She was a wonderful person and her absence will leave a hole in this community,” he said, adding “She was the Mother Teresa of Park County.”

Montoya faced racial discrimination as a child, yet she never let it bring her down. Montoya’s parents immigrated from Mexico to the U.S. in the 1920s. Her father worked as a farm laborer and, while they didn’t have much, they were a proud family. Born in 1930 in Powell, Montoya never left the city except to go on a couple vacations.

When she was 17-years-old, she pledged to serve those in need and never swayed.  She credited her parents for such a giving spirit. “They encouraged us to be the best citizens we could be,” Sally said during an interview with the Tribune in 2017.

“She made that promise to herself and she followed through. I wish I could do 1/100th of what she did in my own life,” Michael said.

In addition to her career and volunteer work, Sally raised three children. Her daughters preceded her in death. Patsy died in 2003 and Susan died in 2019. Her husband, Emil, died 25 years ago.

Neva Slaght considered Sally her mother. She came to Sally 35 years ago at a desperate time. Sally showed so much kindness that Slaght began volunteering to help Sally with her many charitable endeavors.

“She liked my work ethic and said I was strong,” Slaght said. “She called me her ‘horse.’”

Sally had nicknames for all her fellow volunteers, often calling them her elves during the Christmas season. The team were an oddly matched family, often having their Christmas dinners at Sally’s Boutique while keeping the charity open over the holiday.

In 2012, Dave Blevins nominated Montoya for the Jefferson Award, a national award for public service. Montoya was picked as one of the four finalists.

“We don’t know what we’d do without her. She’s our saint,” he said before retiring from the Powell Council of Community Services after 30 years of volunteer service.

In 2014, the Powell City Council declared Dec. 23 as Montoya’s day in the sun for her volunteer work. “Sally has given a lifetime of unconditional care and love to those needing help,” the proclamation stated. She has done so while serving as “a moral compass and lasting legacy of selflessness for our community.”

Sally retired from the Christmas Basket program in 2019, closing the doors to Sally’s Boutique that same year. She most recently resided in the Powell Valley Care Center.

She suffered from depression while the facility was on lockdown during the COVID-19 pandemic. Sally requested Slaght bring her a birthday cake in 2020, asking her to “bake a file in it.”

“She helped so many people. So many children. So many families. From food, to clothing and furniture — everything that a person would need,” Michael said. “Even though she faced discrimination, it didn’t stop her from helping people. She didn’t care what color you were or your religion. If you needed help, she was there for you.”

Family, friends and fans are invited to attend a celebration of Sally’s life. An open casket viewing will be held at Thompson Funeral Home, at 111 W. 3rd St., on Saturday, July 9 from 9 to 9:45 a.m. A service will follow at the Northwest College Nelson Auditorium at 10 a.m. with interment at Crown Hill Cemetery after the services.

Everyone is invited to meet at the American Legion, 143 S. Clark St., to share community, stories, food and refreshments from noon to 2:30 p.m.

Sally wished that all donations be made to Powell Valley Loaves and Fishes emergency food pantry.