As it comes time to harvest barley, four local breweries continue to craft their concoctions knowing that the barley they need to produce their signature beers is being diligently taken care … 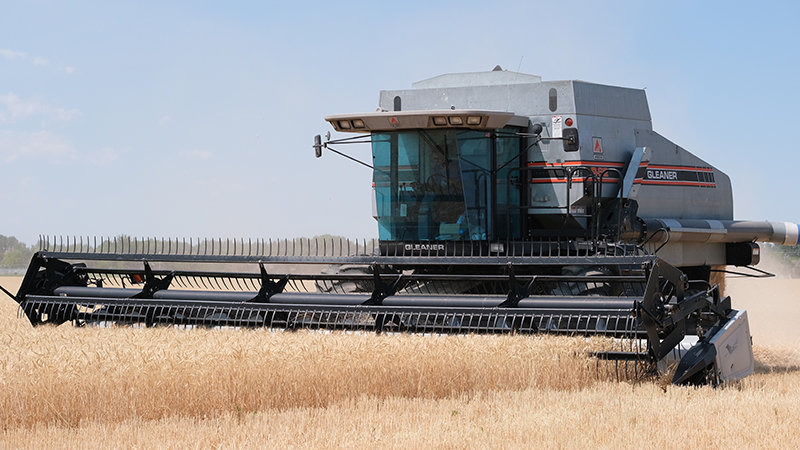 WYOld West Brewery houses their brewing equipment to the left of the entryway. Briess Malt and Ingredients Company employees are proud to see that their product goes into the beer when they enter the building.
Tribune photo by Braden Schiller 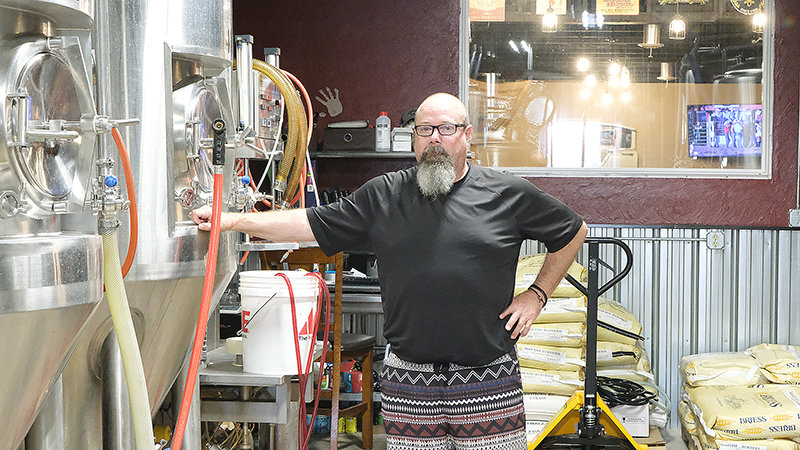 Steven Samuelson, head brewer at WYOld West stands next to one of several fermenters at the brewery.
Tribune photo by Braden Schiller 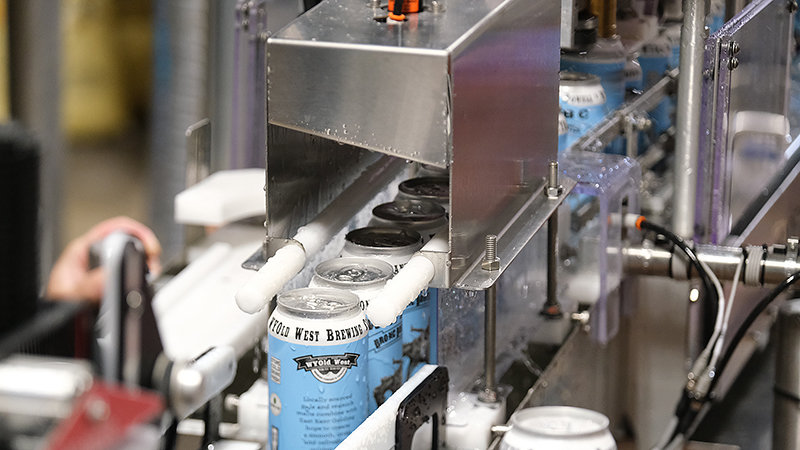 WYOld West Brewery, the only location in town that brews its beer on site cans a case of Bronc Buster Blonde.
Tribune photo by Braden Schiller 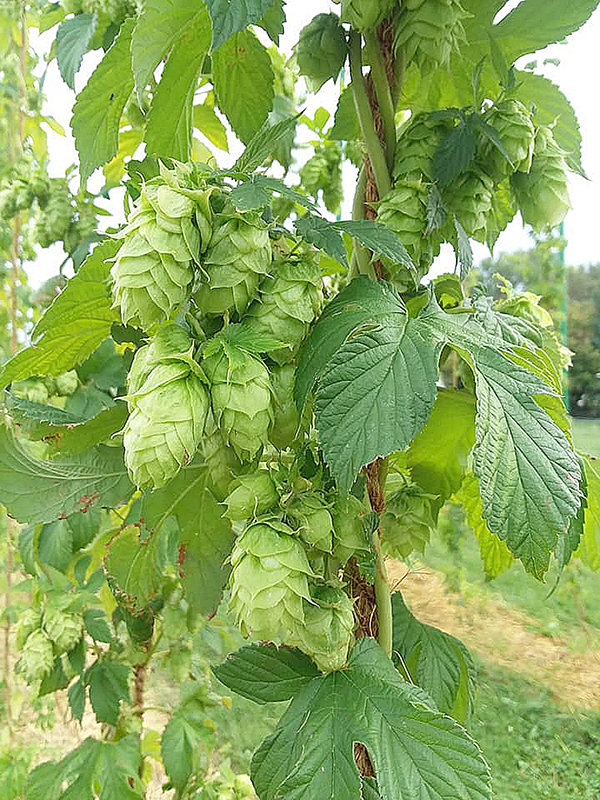 As it comes time to harvest barley, four local breweries continue to craft their concoctions knowing that the barley they need to produce their signature beers is being diligently taken care of.

WYOld West Brewing Company of Powell, Pat O’Hara Brewing Company of Cody, Cody Craft Brewing, and Millstone Pizza Company and Brewery (which brews in Cody with one restaurant in Powell) all have their own style of beer and specific requirements for their barley, as well as preferred suppliers.

Barley is turned into malt which is either used as a base which makes up the foundation of the beer, or a specialty malt to provide distinct flavors and colors.

Briess Malt and Ingredients Company which has one of their main facilities located in Ralston, Wyoming, looks to maintain quality and consistency in its product. According to Jade See, a marketing coordinator at Briess, it’s important that the barley is “exceptionally bright, plump, and low protein.” The malthouse recipe should also be balanced between controlled growth and “setting the stage for the color and flavor development.”

Samuelson is the only head brewer in the area who opts to use Briess for the “bulk of his malt.” He says that it is more expensive than other distributors but he is paying for quality and performance.

Not all of the malt is purchased locally from Briess, as brewers have to buy based on the specific flavor and color qualities they are looking for. For example, Samuelson purchases peated malt from Scotland when brewing Kilted Cowboy which is a Scotch ale with a strong malt aroma and a little bit of smoke according to the brewery website.

Currently Samuelson sources his hops from the Northwest but is looking into Hillcrest Hops in Worland.

According to the Hop Growers of America website, the main contribution of hops, a cone shaped flower, is to add flavor and aroma to the beer.

“I’m hoping he grows some varieties we can use because we would love to buy and use local hops,” Samuelson said.

Samuelson’s attitude towards using locally sourced ingredients pays off when employees of Briess’s Ralston facility come in for lunch.

“The folks that run the silos out there are customers,” Samuelson said. “We see them out here for lunch and they point at the grain bags as they walk in, and they’re proud of what they do.”

Alexandria Cain, the head brewer at Pat O’Hara’s in Cody, which is the only female owned and operated brewery in Wyoming, also uses Briess but opts to use them for her specialty malt rather than a base malt.

Cain said that Pat O’Hara’s did not used to make as much beer, typically one pallet of malt would last for several months, but now with six house beers on tap one pallet will last about two to three months.

When purchasing malts Cain looks for overall consistency, which includes the quality of the proteins found in the malt, as well as consistent color and flavor.

Pat O’Hara’s has been experimenting with new ingredients and recipes, and like Samuelson, likes to use local ingredients when possible. Cain has also been interested in using local hops and has been looking into Hillcrest Hops.

“We hope to use some of their stuff too because local is obviously better and more exciting,” Cain said.

Cody Craft Brewing is the youngest brewery in the area with only seven months under its belt. Head brewer Nick Lawson looks for affordability, consistency and whether or not detailed information about the malt is available. This helps Lawson replicate flavors consistently across numerous batches of the same beer.

Lawson currently sources most of his malt from Proximity Malt, a company based out of Colorado. Originally Lawson purchased his malts from Bulk Malt Grain Supplier for specialty grains and Rahr Malting Company for his base malt.

When Lawson began looking for suppliers he initially looked at Briess and Wyoming Malting Company as an effort to stay local. He found out that Wyoming Malting Company had switched from malt products to nearly all flower products. Lawson could not afford Briess at the time so he eventually landed on Proximity for its affordability and quality of customer service.

Also looking to source local hops Lawson has begun looking at Secret Ingredients Farm which is owned by Shannon and Rachel Sapp of Powell.

The Sapps have been growing hops for three years, hops are matured in their fourth year. With maturity on the horizon the Sapps have been offering their FDA approved hops to local breweries and home brewers. The Sapps grow comet and cascade hops on one acre of land with close to 900 plants total. Cascade hops are common hops and a favorite of brewers according to Shannon. Comet hops provide notes of pineapple to the beer.

Head brewer of Millstone Pizza Company and Brewery Zachary Flynn uses a variety of malts but has a fondness of Briess when it comes to specialty malts. For his other malts Flynn uses Great Western Malting based in Idaho and Country Malt Group. Flynn says that the variety of the suppliers is good and that the more direct route of delivery to the brewery helps save on cost. Briess’s malt is first shipped out from the Ralston facility to a separate out of state facility before coming back into Wyoming to be delivered.

For Flynn, who splits the base malt in some beers between two separate malts, variety and quality are important. The blonde ale is split between two malts with 185 pounds of one malt and 40 pounds of another malt used per batch.

As farmers harvest their barley and look to the season ahead; keeping quality and consistency in mind as they grow their crop will do well to create a desirable product for local breweries.